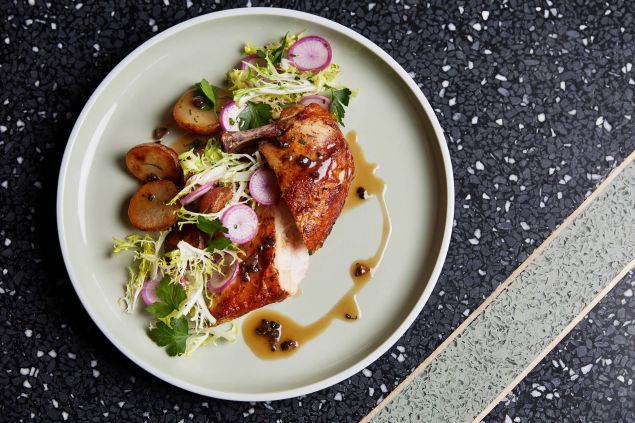 Paley is a big, bold Hollywood restaurant, simultaneously classic and modern, at once luxurious and indie around the edges.

When we walk into the Sunset Boulevard newcomer on a recent Thursday night, the room is smoky and Band of Horses’ “Funeral” is playing and we forget that we’re in Hollywood for a moment.

It turns out that coal and smoke and grilling are a big part of chef Greg Bernhardt’s menu. (And you can see for yourself in the open kitchen.) The “snacks” section of the menu includes smoked chicken liver paté, coal-roasted A5 wagyu beef and coal-smoked amberjack. Main courses include a wood-roasted chicken with frisee and truffle sauce. A delightful grilled duck breast is served with umeboshi (Japanese salt plums), ginger-laden potato puree and mushrooms.

Paley, as our waiter points outs while The Shins’ “Caring Is Creepy” is playing after we order a strawberry Pimm’s Cup, serves California food with Japanese influences. So the Paley Plateau seafood tower we enjoy has scallops with soy ginger vinaigrette and daikon along with the requisite—and excellent—oysters and shrimp cocktail. The raw bar selections also include hamachi with shaved fennel, white soy, wasabi and citrus. Albacore is adorned with yuzu kosho, avocado and marinated kombu. 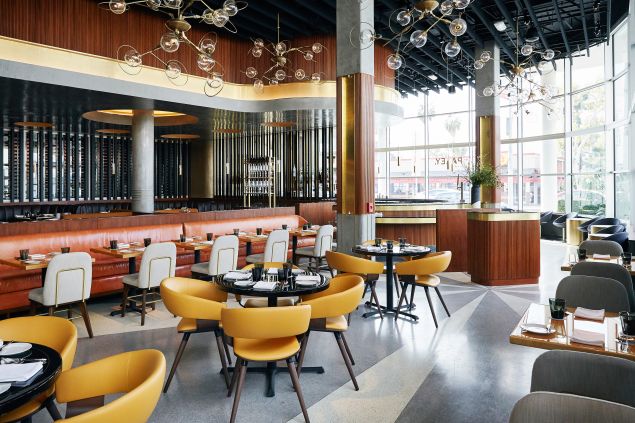 Dishes like this—not to the mention the canoe-harvested wild rice entree with sweetheart cabbage, ginger and Blue Lake beans—are no doubt 21st century California cuisine. But Paley also makes a point of nodding to the past. The plush banquettes and stunning light fixtures make dining feel like an event in a room that celebrates Art Deco flourishes, mid-century design and Hollywood history. Paley is located in the landmarked 1938 CBS Radio building. The name Paley itself is a tribute to former CBS CEO William S. Paley and his wife Babe.

The restaurant is adjacent to the L.A. outpost of elite co-working space/cultural gathering place NeueHouse, so it’s no surprise Paley is also open for power lunches—and not much of a shock that LCD Soundsystem’s “Someone Great” plays during dinner as we eat fantastic popcorn ice cream topped with brown butter powder.

Mr. Bernhardt, which just started weekend brunch on May 7 and will add weekday breakfast soon, cooked at beloved bistro Church & State and at Ludo Lefebvre’s legendary LudoBites pop-ups before getting a shot to create his own Hollywood blockbuster. He’s teamed up with Plan Do See, a Japanese hospitality firm whose sprawling global empire includes TriBeca’s Sushi Azabu and a forthcoming Sushi Azabu spinoff in Brooklyn near the Barclays Center.

To get from NeueHouse to Paley, you walk through a courtyard where you might notice elaborate sculptures from Dustin Yellin, a Brooklyn-based artist who runs a Red Hook creative compound and gave former Barclays Center stakeholder and current L.A. dining-scene man about town Jay Z a vigorous hug in the “Picasso Baby” video.

This is a complex with all sorts of angles.