Last week, I wrote about The Red Lady’s journey into the long dark night of the soul on the first episode of the new season of Game of Thrones.  To recap briefly, shit was looking a touch grim for her.  She was receiving all the signs of being completely abandoned by everything she believed in – Stannis and his armies were dead, and all the promises her faith had made to her were turning out to be false.  Also, she turned out to be exceptionally old.  There’s a therapeutic term for this, groundlessness, and it basically means that everything you thought you could rely on was suddenly shown to be transient and useless.  People often find themselves feeling groundless after a major loss – the death of a loved one, getting fired from a job, not being allowed into the Magic Castle in LA, that kind of thing.

These times of groundlessness are, ironically, considered a kind of holy ground within the therapeutic relationship.  By which I mean they demand a very particular sort of balancing act between therapist and client: tread carefully, follow your heart.  Or, in the words of Kelly Link, “Be bold, be bold, but not too bold.”  Groundlessness is a time when all the little marks and signs we use to anchor our identities in the howling swirl of reality have left us, for better and for worse.  It is a time when the ultimately-false sense of “I”, of an ego starkly defined against the world, is seen completely through.  All illusions are shattered and we are open to the horrifyingly infinite nature of the world and ourselves as world.  Statistically, these moments often lead to great awakening or to suicide.

As episode two of this season picks back up on The Red Lady Melisandre, we see her listing towards the latter option.  Keep in mind, the characters on the show haven’t been privy to her pity party the night before the way we have, so when Davos walks in on her staring empty-eyed into the fire he is appropriately astonished.  Which is a hallmark of this psychological test – when a person sees through the meaning of social graces, they stop putting it on for the rest of us.  Melisandre is, in a very real way, scary to look at.

This woman who used to project such an easy and joyous confidence is now suddenly out of the business of projecting anything at all.  And though she’s got her young bod back in place, it’s not the same.  The way she holds herself, her neck droops, her face slides; it’s an alchemy of aging that communicates more than real wrinkles ever could.  Just by looking at her we know that she’s facing something worse than the ravages of time.  She’s facing the ravages of a long time of being this thing that she is.  Whereas the old are afraid of their death, Melisandre, and all of us at some time or another, is afraid of her life.

It’s fitting, then, the task she’s being asked to perform and that she is able to do it.  Davos asks her to help bring Jon Snow back, and she pointedly replies, “if you want to help him, leave him be.”  Why bring anyone back to life?  Having seen through the sacred lies we tell ourselves – that happiness is always available, that success is achievable if we just work hard enough – Melisandre now understands the only hard and fast rules of life: it’s going to hurt, and none of us get out alive.  In a more analytic sense, we could say she has dissociated from her personality, from her relative experience, and now sees from a bird’s eye view that only catches the objective trends of life.  When working with clients, though, I find it’s more effective to call this a “bummer and a half.”

Davos catches on quick because he’s been here.  This guy’s a survivor, and when he woke up burnt and alone on a rock after watching his sign melt in a gout of green flame, he had a real choice to make.  Play it tough and try to swim to safety and probably die, or make himself vulnerable in front of strangers and only maybe die.  While he shows up ready to engage Melisandre in their old quipping style, he deftly switches gears to the concrete when it becomes clear she’s not interested in word games and preening.  This, by the way, is recommended when dealing with anyone who has lost track of their self in the midst of emotional devastation: with suicidal clients you ask about a plan, agree to a contract, and set clear times to check in; with clients in the grip of mania (like Balon Greyjoy’s brother!) you keep it simple, ask them to stick to the rules of reality for your sake.

So when Melisandre presents him with total hopelessness for her abilities, Davos asks the right question, and it’s a simple one: how do you know?  How do you know you can’t do something incredible if you’ve never tried?  This may seem trite, but it isn’t.  Most of the time we get through the day coasting on easy victories and low-hanging fruit.  This is why we value reliability and fear being off the map, so to speak.  By which I mean, it’s too exhausting to constantly affirm that life is worth living in the face of absolute reality, or at least it feels that way.  If you don’t believe me, re-read the Bhagavad-Gita.  Instead, we pre-load our days with a thousand repeatable, frustrating, and very winnable challenges like getting up on time, securing a tasty cup of coffee, flirting with our coworkers.  It’s all extremely low stakes because we need to be able to do it again tomorrow so that we can tell ourselves we experienced more wins than losses before we go to sleep.  Because, you know, the night is dark and full of terrors.

Davos flips the script, and Melisandre rises to the occasion.  He reminds her that she’s a god damn miracle worker, that these little victories she’s grown so accustomed to don’t look so small from the outside.  Which is as true for any of us as it is for her – waking up early is a nightmare, a good cup of coffee tastes like life itself, and flirting with a coworker reminds us of just how fuckable we really are.  So why not keep trying?  Having shredded through the identity that contained you before, who’s to say you can’t raise the dead?  After all, once you get out of your own way nothing in life is really that hard if you’re willing to try.  Which is what this therapy thing is all about: trying in the face of your desire to give up. Or, as Freud would say, defying your death drive.  Life is your story, and only dead men tell no tales. 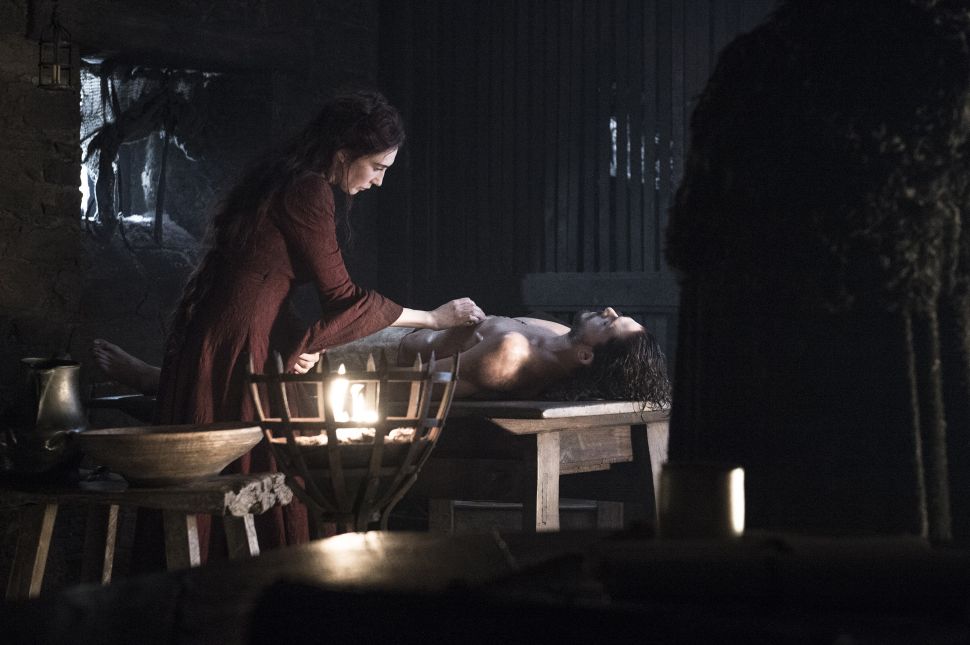