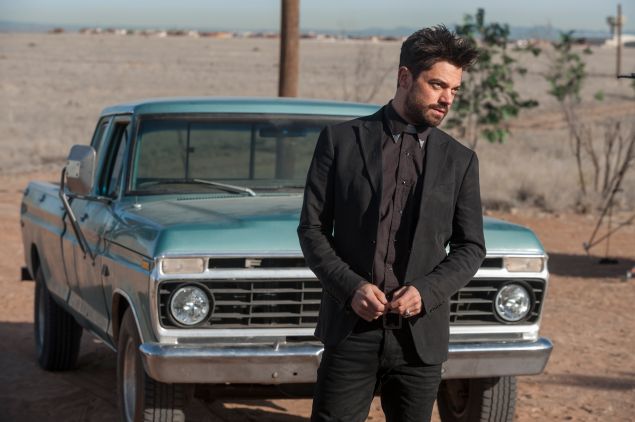 Do you think the end of the world is coming?

“The preacher man says it’s the end of time. He says that America’s rivers are going dry. The interest is up, the stock market’s down. You guys have to be careful walking around here this late at night. This — no, we don’t, ma’am, I’m sorry — this, this, this is the perfect place to get jumped.”

But do you think the end of the world is coming?

Is it the Word of God that has come unto Jesse Custer, or is he merely possessed by the spirit of the ‘90s? Preacher, AMC’s new readymade blockbuster series — it’s got the nerd pedigree, the nonsensically titled Chris Hardwick postgame show Talking Preacher, a superstar co-creator in the form of Seth Rogen, the whole nine — is based on the comic book series of the same name by writer Garth Ennis and artist Steve Dillon (and, though he’s not credited, tone-setting cover artist Glenn Fabry), which ran for 75 issues or so during the pre-millennium tension of the last five years of the 20th century. This was perhaps the last era during which taboo-busting for taboo-busting’s sake could get a comic over with an audience; a quick visit to the Preacher wikipedia page reveals more inbreeding, cannibalism, anal rape, and Kurt Cobain references than you can shake a crucifix at.

And judging from the pilot episode, the TV show is just as indebted to the signature filmmaker of the era, Quentin Tarantino, as were the “cutting edge” mature-readers-only comic books of the day. There’s a redneck-laden setting, a madcap vampire, a soundtrack full of hipster-revered square singers, a series of self-aware title cards (OUTER SPACE / AFRICA / TEXAS / ETC.), and mutilation galore. If you mashed up Natural Born Killers, the “bring out the gimp” sequence from Pulp Fiction, and the “Stuck in the Middle With You” scene from Reservoir Dogs, then sprinkled in some post-9/11 elements like the Budd segment of Kill Bill Vol. 2, the Death Proof half of Grindhouse, and the cartoonish graphic design of Scott Pilgrim (itself a comic-book adaptation) and Zombieland (starring Natural Born Killers leading man Woody Harrelson in what I insist to this day is a reprisal of his role from that Tarantino-story-credited film), you’ve got pretty much the whole show nailed down. To paraphrase a conversation I had about the show with critic Eric Thurm, you’re a Bill Hicks monologue away from reliving the second half of the Clinton administration.

So is the bloody thing any goddamn good?

Depends on your standard of measurement, I guess. Being the black-clad moralist I am, I was turned off by the premiere’s penchant for playing human suffering for laughs. In a black-is-white, up-is-down time when the rigorous moral inventory taken by Game of Thrones is treated as exploitation while the white-nationalist fever dream of The Walking Dead and Fear the Walking Dead is inexplicably given a pass, I shudder to think what audiences will make of title character Jesse Custer’s mercenary ex-girlfriend Tulip building a homemade bazooka and shooting it into the head of an enemy before the adoring eyes of the children who helped her construct it, or Jesse’s own sadistic dispatching of a conveniently repulsive Confederacy-revering abuser in a bone-breaking barroom brawl. When he uses his newfound supernatural powers — derived from a baby-voiced entity that crashlanded on Earth from outer space and blew up several true believers, including Scientology apostle and slaveholder Tom Cruise, before settling on Custer — to guide a sadsack mama’s boy to “open his heart,” the dude literally carves his fucking heart out; it’s treated like a sick joke, but definitely a joke, making a mockery of Jesse’s newfound devotion to his vocation and the mother’s horror alike.

Nevertheless, there’s no arguing against the exceedingly well-cast main characters. Dominic Cooper is as convincing a Texas shitkicker gone semi-legit as ever there was; it’s gonna be a challenge to grow tired of his pompadour and seven o’clock shadow. Joe Gilgun is as magnetic a presence as blarney-spewing Irish vampire Cassidy as were any of his predecessors in the late-‘90s movies of Danny Boyle and Guy Ritchie. This being a cable drama geared towards men, actor Ruth Negga’s first appearance onscreen is bareass naked, but she’s so lively as Jesse’s still-in-the-game ex-girlfriend Tulip you almost want to forgive her for involving elementary-school-aged children in multiple murders.

And the audacity of the thing is not to be underestimated. Nothing this side of Starz’s miraculously entertaining Ash vs. Evil Dead is this willing to put the ostentatious artifice of splatstick horror filmmaking on the small screen. From the ‘50s-filmstrip-style opening of that supernatural entity careening through Saturn’s rings, to the explosion that detonates the first preacher to receive its power, to the winkingly broad location captions (AFRICA is a country), Preacher is, so far, not afraid to get silly.

Its problem is that this silliness can’t be stopped in its spread. If you’re going to make a show about how, in Jesse’s words, “Violence makes violence makes nothing at all,” you can’t make it a punchline too often without losing something of your social critique. There’s a dilettantish, interloper air to Preacher’s examination of faith by presumably faithless filmmakers for a presumably faithless audience, its exploration of brutality by and for people who will never be on either the receiving nor the administering end of it. Is this show just slumming, or is it truly attempting to rebuild its father’s church? 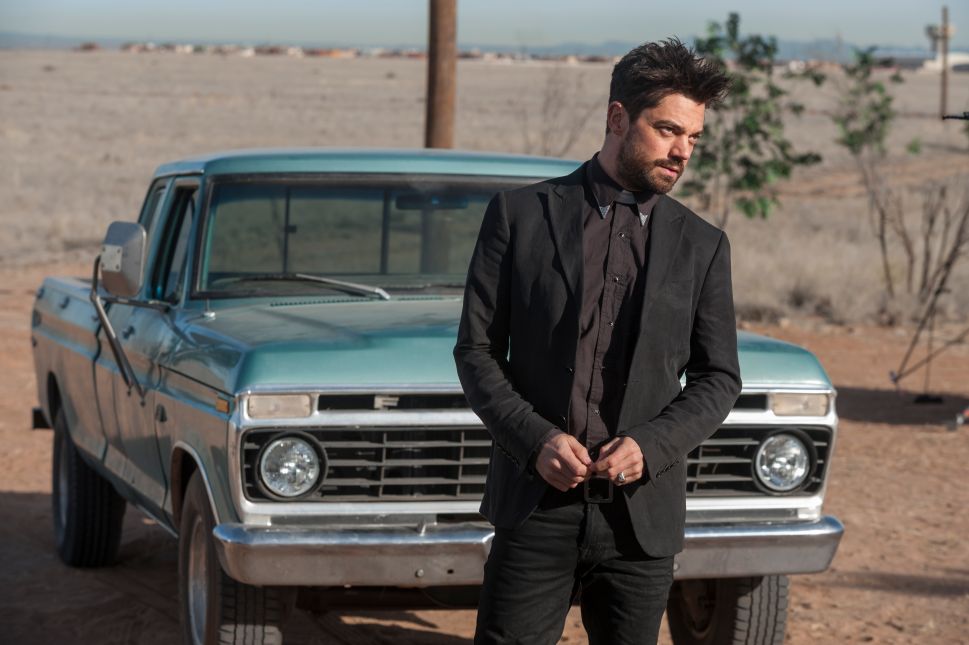