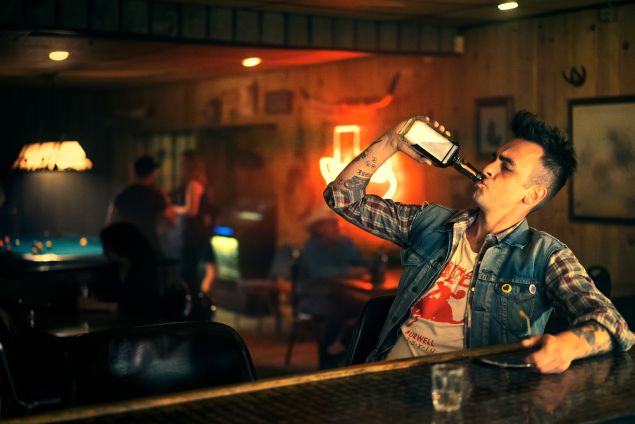 At a recent press conference for Preacher Seth Rogen described, or I should say marveled at, casting Joseph Gilgun as Cassidy for AMC’s latest comic-adaptation: “It’s one of those things that happens only a few times throughout your career, where you just go ‘Oh, it’s you. You’re the character that is written on the page. And by doing almost nothing, you are achieving more than I ever could have imagined.’ You could tell Joe’s lived like 100 lifetimes, and he’s probably done some shit you do not want to hear about, but at the same time he’s one of the most fun, loving people you’ll ever be around. And it was exactly what the character needed to be.”

Mr. Rogen isn’t lying. An hour earlier, sitting across from Mr. Gilgun, tattooed and jittery, I got the sense that Cassidy had walked directly out of Garth Ennis and Steve Dillon’s original comic story of a small-town preacher turned the voice of God himself, and into the Hotel London on 54th. Which speaks to the kind of person the English actor is: Amid Preacher‘s bonkers, bloody tale of religious redemption, Cassidy just also happens to be a vampire; foul mouthed and charismatic, as drawn to drugs and alcohol as he is to human blood.

Mr. Gilgun slides an iPhone across the table to me as I sit down. On the screen is a photo of five or so dime bags, filled with weed. “Can you believe the way they fucking sell cannabis here?” he asks, smiling. Though his teeth aren’t pointed, the moment is classic Cassidy.

How’s the lead-up to Preacher been for you?

Honestly man, I used to be a plasterer, and used to sell bits of weed and shit like that. Just fucking scraping by. And now I’m in this posh hotel. Just look at this shit. Yesterday I had a cup of tea, I was at the Nomad Hotel. I’ve never known anywhere to be so incredibly pretentious. It’s the clientele, man. Everyone has this vibe of “do you know who I think I am?” I love New York, it reminds me a bit of London. I don’t think I could live here, but I’m fucking chuffed that I’ve met the place.

Oh, yeah, New York is a strange place. I live here, but you need to get out sometimes.

It’s the same in London, man. I’m from this working class town on the fringes of the rural aspects of Lancashire. And every now and then you go to London and see the fucking wankers it breeds. It’s not just wankers, it does breed complete angels and real characters, as well, it’s insane for that. But it’s a culture shock for sure. Meeting people who are just immediately rude. In my head I’m thinking ‘I’m going to fucking hit them.” I feel my knee go, like I’m going to fucking hit you. 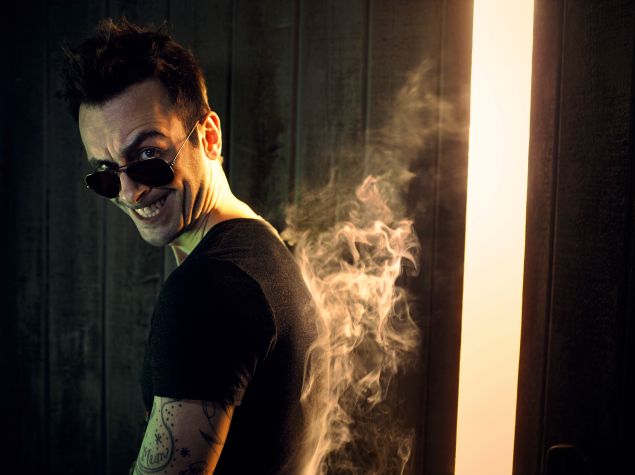 You mentioned you grew up in Lancashire. Can you compare that to the deep, American south where Preacher is set?

I can, actually. In the sense that [Preacher setting] Ratwater is very closed off, very shut off from the rest of the world. So you have this microcosm of these fucking insane characters like Sheriff Root, his son Eugene, Walter, Quinn Canyon, all these fantastic characters. It’s like my town, it’s an ex milling town. Back in the day we used to produce a lot of cotton and would’ve been part of a large industry during the industrial revolution. And it has a very proud past. I think there’s something very sad about a proud past, and an identity crisis. I think Charlie, where I grew up, has that. It’s very similar in Ratwater. It’s a trap, it’s a place you don’t really leave. Because the horror you know is better than the horror you don’t. I don’t know if I’d actually call it horror but, you know your book. You know your life and how it’s written in Ratwater, how it’s written in Charlie, but you don’t know how it’s written if you leave. So, in that sense it’s really similar, except the accents are different and it’s not raining all the time.

Religion is so deeply embedded in the American south, is that comparable at all?

Not where I’m from. My generation, we’re wising up to it all now. It’s not that I don’t respect religion, we all have to talk about it in all that PC bullshit we do now in 2016. Fuck off, I have my opinions. I’m not one of those sensitive people. Where I’m from there are religious people…but I’m not listening to a fucking book that was written all that time ago. Some cunt wrote a book, full of contradictive lies. It’s 2016 man. We’re becoming more conscious of being human beings, the nature of who we are.

As far as religion is concerned for my generation, a lot of young men and women have decided to go “Eh, fuck it, no. No. I’m not giving up my Sunday to go sit in a fucking room.” It reminds me of, like, I was quite a violent kid. Then I met this new group and found weed, and then I wasn’t a violent kid anymore. Couldn’t ask me to be violent. 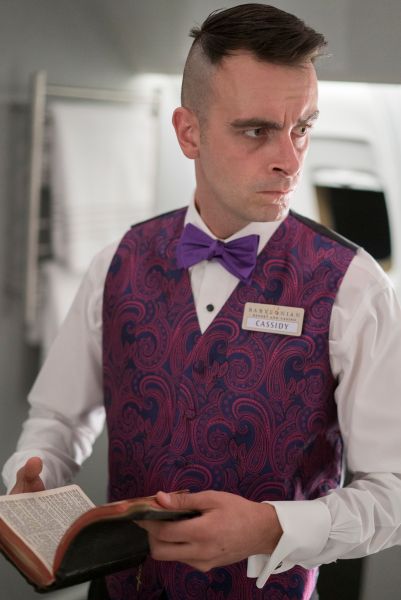 Well yeah, why would you be?

Exactly. It opened everything up, where now I wish I had been stoned and worked it all out from the beginning. Ignorance is bliss, that whole deal. Preacher, what it’s saying is not just blasphemy and good fun violence. It’s asking, “Where is God?” If he is there, what’s he doing? Where’s he been, the cunt? We have all this shit going on. I love that Preacher is unapologetic about its questions. If there is a God, fucking come on, man. In the book you wrote, you’re doing shit. You been having a fucking vacation?

I feel like you almost have to know a little about religion first, before you can understand that Preacher is not just blasphemy. It’s just laying out questions.

For those who don’t want to think, it’s just good fun. Ultimately, that’s all we want. If you’re someone who is sensitive–a wanker who is sensitive, let me change it–don’t watch Preacher. Don’t be writing those letters in, pissing and whingeing about the state of TV. Don’t watch it. Watch…

Yeah, get fucking Netflix. But it is a fucking question, really.

It’s interesting that amid all those questions, you just also happen to be playing a vampire. Cassidy is coming along at a time where vampires have lost a little respect. How did you want to stand out?

Before getting the job, I had serious beef with sexy vampires. True Blood, and all that. I have no beef against the actors themselves, I just think the vibe is bullshit. In my head, if vampires truly existed–let’s get rid of all the bullshit, let’s call it science, get rid of the mythology like crosses, silver bullets, wooden stakes, bullshit–you wouldn’t be sexy. I didn’t want Cassidy to be sexy, I wanted him to be a bit of an idiot. Cassidy looks at these trendy dickheads, with the capes and all that, and hates them. 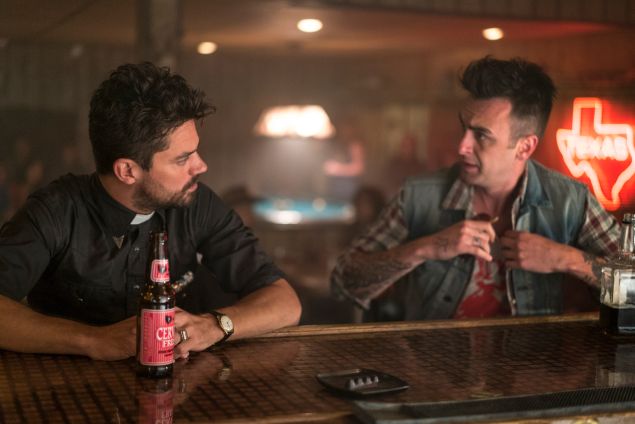 Apparently there was people asking why Cassidy wasn’t wearing his shades from the comics. Well, because dickheads wear shades indoors, that’s why. I think Cassidy hates the fact he’s vampire. He thinks he’s an abomination. He’d do anything to be run over and be killed. He’s an honest human being. He loves Jesse. If he could give his life for him he could.

But yeah, I’m trying to inject a “could give a fuck” attitude. Don’t do the smoldering.

Oh, yeah, there’s so much smoldering on True Blood.

It’s awful. Nobody smolders in real life. Well, they do, which is also fucking awful. Go to the Nomad hotel and you’ll see some fucking smoldering.

Go get a coffee in Brooklyn.

Awful, awful. Just fucking awful. So I don’t want him to be a dickhead vampire. I don’t have magnificent blue eyes. They chose me for a reason. I’m rough. I wanted to inject some of how I am into him. I like to think that’s what is different about Cassidy. He’s just a fucking bloke. He’s just a guy.

Yeah, that’s it. He just has to get on with it. It’s not a case of being cool, he just has to get by day to day. And I guess that’s how it’d be. I remember during my research, it just seems like nonsense. Cassidy, in the comics, that’s more believable. That’s what I think a vampire would be. He is a human being, he does feel shit, everyone leaves him. Everyone he’s ever love has just fucked off and died. He’s fucking damaged, like any human.

I think in some weird way, Cassidy is the most relatable character on the show. He’s just living a relatable life over and over again.

Yeah, it’s a Groundhog Day thing for him. It’s this endless tragic roundabout. I don’t know anyone who doesn’t do that. I do think he’s relatable, even though he’s a vampire. Isn’t it funny, that? 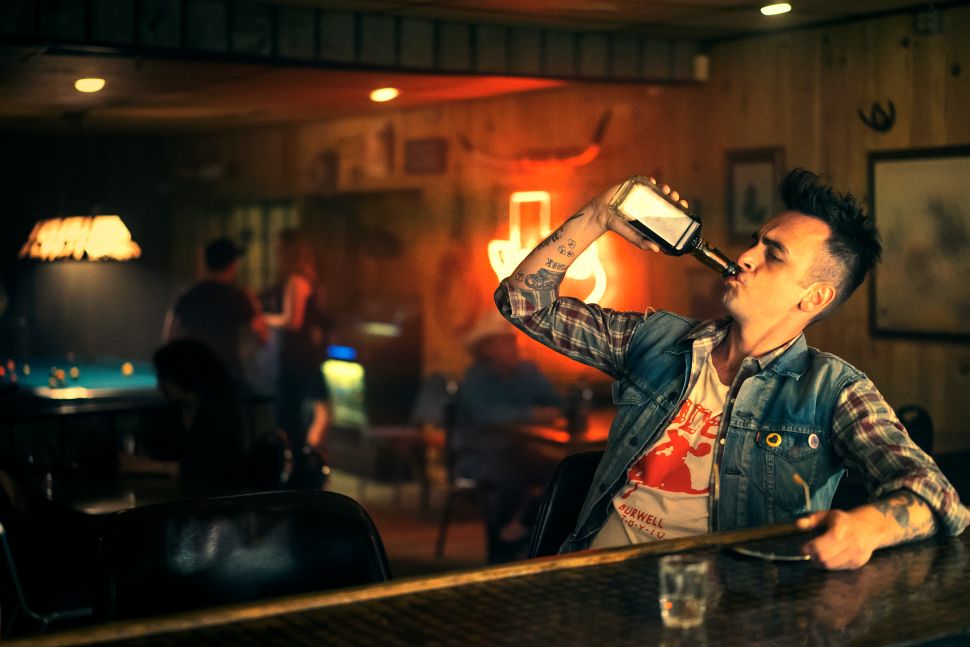