This episode, “Airing Your Dirty Laundry,” is aptly titled, and not just because Slimy Johnny threw a party at his place of business (but why the hell would you throw a party at the dry cleaners??). Talking about that which should be kept private is the core theme of the episode. Everyone gets in on the mudslinging, from Sonja and Bethenny’s spat over naming her new Prosecco Tipsy Girl, to some pretty, um, juicy, information blurted out by Ramona about the Countess’s skills in the bedroom. On reality shows, airing one’s dirty laundry is part of the game; skeletons come out of the closet, people get divorced, families fall apart. It’s why to be a reality star you have to be completely narcissistic and full of hubris to believe that you’ll somehow be immune to reality television’s inevitable repercussions. And it’s why some of these women approach these shows (and their life) like they are actresses on a really bad soap opera.

Which brings us to Sonja. Sonja lives her life through a persona. The floozy, boozy Sonja can be fun and carefree, whose “let’s party!” approach to life is great for a night out on the town. But that breezy act also makes it impossible to truly connect with her, to form a bond that’s more than superficial. And it allows her to hide her more cunning, ambitious side. The side that’s jealous of Bethenny’s success, this new money-upstart who has managed to overtake them all in wealth and prestige. Underneath the flighty façade that Sonja presents to the world, Lady Morgan, of the crumbling Grey Gardens Townhouse Château Morgan, is seething. She wants what Bethenny has and believes she deserves it, goddammit. And so when Bethenny came back on the show last year, Sonja glommed onto her like a rabid shopper clutching the last Jimmy Choo stilettos at Saks’s After Christmas annual sale. Sonja, who only knew Bethenny from their previous shared single season together, took their cordial relationship and ran with it. She made Bethenny her “mentor.” And Bethenny, thinking she could help Sonja out of her miserable financial situation by giving her good business advice, really took Sonja under her wing.

But Sonja is supremely selfish and supremely narcissistic (but which Real Housewife isn’t?) and she doesn’t just want Bethenny’s help, she wants to BE Bethenny. And she’ll keep throwing things at the wall – her fashion line, her jewelry line, her toaster line – until something sticks. And so I don’t doubt that Sonja named her Prosecco Tipsy Girl specifically because the press would pick up on the similarities. I don’t doubt she waited until after the news broke to reach out and wish Bethenny a Happy Thanksgiving – 2 days after Thanksgiving, in order to arrange a meet up and play dumb. And I don’t doubt that Sonja chose Peter as a business partner specifically because he has a shady history with his businesses (like not opening AOA with Ramona last year). Because, as Bethenny said, Sonja is cunning. And she may not follow through with her business ideas, but that has less to do with her lack of skills than with her laziness and lack of work ethic.

Bethenny is a straight shooter, and when Sonja comes by the office to talk business, Bethenny didn’t miss a beat and jumped right into what bothered her about the whole thing. It’s not just the name, but it was the fact that Sonja didn’t even bother to check in with Bethenny to see if such a move would be problematic, and the calculated moves by Sonja to get her name in the press. And after everything Bethenny did for her, Sonja’s actions were, in short, a slap in the face. So, like any jilted lover, Bethenny didn’t hold back and didn’t sugarcoat it. She told Sonja that she is a fraud; that Tipsy Girl is a “cheater brand,” a brand that rides the coattails of another to bring in sales they don’t deserve; that her lifestyle brand was all bullshit, from the toaster to the burlesque to the jewelry business.

Sonja tried hard to keep it together, and made a valiant attempt blithely bat away Bethenny’s barbs in her usual nonchalant, breezy style. But she soon shrunk under Bethenny’s scathing words and, in a small, sad voice, acted like she had no idea it would be a problem to name her Prosecco Tipsy Girl. And then she broke down, her voice cracking as she spoke of her Chapter 11 woes, how she was just trying to put her daughter through expensive boarding school. And Bethenny did feel bad, as any normal human being would when someone starts sobbing on your couch. But, at the end of the day, Bethenny is right: you can’t have it both ways; you can’t play stupid and smart at the same time. And, with that, Bethenny stalked out of the room, leaving a sputtering Sonja still trying to talk her way out of the mess she built.

Over at Jules’s house, her dirty laundry takes the form of her ex-nanny Ana, who took her Christmas bonus and got the eff out of Dodge. But Jules, who isn’t the brightest bulb and is tone-deaf about her privilege, just implicates herself with every word that leaves her mouth. Her idea of a nanny isn’t just a caretaker of the children; to her, a nanny is a dedicated waiting-on-line-for-sample-sales hired hand, a glam squad in-a-pinch for the Mrs., and stylist for the children. I think it’s sad that Jules can’t figure out how to hand off the kids to her husband so she can take a shower and feel like a normal person. How is it that she looked like a member of the undead while Michael’s hair was, as usual, gelled and primped and slicked back? Don’t most couples take turns watching the kids so that they can properly take care of themselves so that they are presentable to humanity? Is Jules that much of a shut-up wife, a Stepford robot who makes no demands of her incredibly hardworking breadwinner? Or is Michael that much of a douche, thinking the kids aren’t his problem, that he isn’t required to spend quality time with them?

Anyway, we end this episode with a party at Slimy Johnny’s dry cleaners. And boy, was that party filled with drama. First, Luann sees her ex Rey – an unremarkable, yet attractive fellow. So it turns out that this little relationship ended on a sour note. So sour that after a drunken, slurring Rey comes up to Luann and professes his love for her and expresses his anxiety over seeing her, Luann – one of RHONYC’s biggest partiers – got so uncomfortable that she hopped into the first available cab and left.

But Rey, still at the party, still slurring, found relief in the form of Sonja and Ramona. He continued being a nuisance, but as this show’s resident instigators, Sonja and Ramona were enjoying every drunken second and egged him on. And once Ramona found out he was Luann’s ex, the gossip section of her brain lit up and she hitched herself to his side to hear all the lurid details. And just as Ramona’s gossip tank was nearly filled, Slimy Johnny politely came by to kick Rey out of the party on the orders of Dorinda, who had just witnessed Luann leave due to Rey’s behavior.

See, Simy Johnny is a sleazeball, but he has two things going for him: he worships the ground Dorinda walks on and he is the owner of the best dry cleaners in the entire world (I am not kidding; I had a stained leather skirt that everyone said was irreparable, but that place – Madame Paulette – literally did the impossible and they returned my skirt back to me good as new). It’s why despite the slurring attacks and generally creepy behavior and volatile relationship, I can kind of see why Dorinda is with him. When Dorinda asks him to do something, he does it: he comes up to this Rey dude and tries to escort him out in an almost gentlemanly-like fashion.

But Ramona wasn’t ready for her latest source of gossip to go and started arguing with Slimy Johnny. Slimy Johnny, still smarting from Ramona’s comments last episode, exploded. He put his hand in her face, he yelled at her, he called her two-faced. Then they took the fight outside and Dorinda joined. And then a lot of stuff happened at once and it was difficult to keep track. All I know is that Dorinda went full-on mob wife on Ramona and Slimy Johnny and shut that shizz down.

So confession time: I recently started following Ramona on Snapchat (cue monkey hiding it’s face emoji), and Ramona does this thing where she gets all dramatic about RHONYC (she’s oddly normal-ish about her real life, most of the time). It’s like she’s a drama student who feels a need to over-emote. And her Snapchat histrionics felt vaguely familiar last night, because Ramona went into manic mode and we were treated to the 50 shades of Ramona show: Angry Ramona reacting to Slimy Johnny. Crazy eyes Ramona when trying to make her case to Dorinda about what happened. Dramatic Ramona while trying to lay the blame at the feet of Slimy Johnny. Frantic Ramona as she begged Dorinda for forgiveness and claimed ignorance about what happened. It was like watching a highlights reel from the past 8 years of Ramona’s crazy antics, but we got to see it all in real time (as real time as a pre-recorded show can be) in the last 5 minutes of this episode.

– Lots of minor, but interesting stuff with Carole.  Adam is back in town and they are coming up with a delightful idea (and name!) for a cookbook: The Reluctant Vegan. Carole is fostering a kitten!

– Much has been said about Ramona’s malapropisms and mispronunciations. But it’s clear that she has some competition in that department in the form of Sonja, with her “sixty-eleven” comment in reference to the number of people the Countess is dating, and calling her townhouse apartment a “B&P” when she meant “B&B.”

– Rey and Luann’s confrontation; this is the kind of material that reality television producers live for but all we got was an audio recording of their interaction. Where the hell were the cameras?

– As Bethenny lay into Sonja, her employees sat looking intensely at their screens, pretending to work even as they were clearly listening and visibly cringing at this showdown. I feel your pain, nameless SkinnyGirl employees. 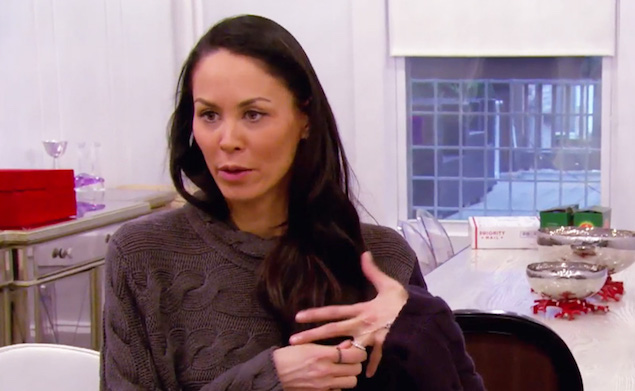