There were two episodes of Real World on last night which made me realize that MTV should do twelve seasons of Real World a year and then air all the episodes consecutively on the first day of each month. That is really my Platonic ideal of PerfectReal World.

Speaking of perfect, Amanda (Please) and the Key West Carny Crew show up in Vegas. Amanda (Please) is Dione’s ex-girlfriend who he still long distance treats like his girlfriend even though he slept with Kailah and Kia-like-the-car from Ghost Day Bar, and prob def a handful of other Vegasites. Everyone that is friends with Dione has a carny name. These are the carny names of Dione’s friends. Morning Beer, Bobby Ballsack, Sally Mike, Vajayjay, and Pep. Dione is Pep, which is short for Dione Pepperoni, spelled like it rhymes like Dee-Own-Knee Pepperoni. Kailah asks “why do they call him Morning Beer?” Because…he drinks beer in the morning. Morning Beer is like seven feet tall, maybe eight when he’s riding the overboard. Amanda (Please) has a suitcase that is the same size as her which is wild because as the size of a person she is not that big but as a the size of a suitcase she is very big. She brought three outfit changes per day because she is the Carny Queen. Ceejai and Dean join the carny crew immediately. Dean becomes Deanie Weenie to go with Dione Pepperoni. Kailah is not feeling any of this. It’s a bit awkward between her and Amanda (Please) seeing as they have both pitched the same carny tent. But Kailah takes out her frustration on Dean, accusing him of acting differently and buying into the carny-ness of the visitors.

In the meantime, everyone is still on Jenna’s case about her “boyfriend.” I can’t tell why they care so much most of the time it’s pretty clear nobody wants anything to do with her. Dean wanted to kiss her woke for a little bit so maybe he cares because he cares. Her boyfriend from home won’t call her anymore because he refuses to have anything to do with the show, including his voice. So they just exchange sad emails. Dean gets particularly amped one night while Amanda (Please) is trying to convince Jenna to enjoy her time in Vegas and not worry about this cheesy dude back home. Dean stands over Jenna and raises his voice about it. Jenna says she feels threatened. This escalates over the rest of the episode. Ceejai gets involved because she wants to protect Dean’s reputation. She knows that as a person of color Dean being accused of acting threatening carries a more series connotation than if it were someone else in the house. All of the opinions are valid and this is a solid lesson in not taking for granted somebody else’s background. Jenna has a history of seeing men be violent to women and therefore she felt threatened, which is legitimate. Dean thought he was approaching a friend in a safe space. Ceejai didn’t want to see anyone try to take anything away from Dean’s character. You add in some booze and emotions go through the roof. The next day everyone apologizes and they make up.

Amanda (Please) hooks up with Dione in the shower. Dione gets pulled out of the shower by his boy. The shower door is open. Amanda (Please) is in the shower. They blur her out but they show so much that you basically see more than there is to obscure. Amanda (Please) asks Dean to close the shower door. Dean stares like mouth open, eyes not blinking, frozen in time and space like the kid in A.I. who gets stuck under for one thousand years. Without moving anything but his one arm, Dean slowly, I mean super slow-motion slowly I mean like hitting the play button twice on your VHS remote so the tape plays at half-speed slowly, Dean finally closes the door. Dean is so stunned he can’t even talk, when Amanda (Please) asks him how to shut off the faucet, he just gestures turning knobs while his chin mops the tile. I’ve been waiting for Amanda (Please) to show up all season. Amanda (Please) is kind of awesome. She comes all the way to Vegas with Dione’s friends but then gets salty at him when he’s clomping around with Morning Beer and Sally Mike instead of paying her all the attention. But then she’s like “Im’a take my shot, leave me alone, Dione.” Then later Dione’s like I’ll come into the room to have sex with you and she’s like fine and then Production puts up a graphic that says THREE MINUTES TWELVE SECONDS LATER and they’re doing it in front of all the roommates. I mean under the covers, but Amanda (Please) is shooting peace signs out from under the blankets. Unfortunately, the lovefest doesn’t last because even though Amanda (Please) wants to take Dione to Bali after the show is over, Dione can’t love anybody because that is not the carny way. He must live off the land by eating other peoples’ Pop Tarts and not be tied down so he breaks it off with her and she goes home. I don’t want her to go home I wish she could stay. I wish she could be a new roommate but Production would never do that…

After all the carnies go home, the roommates get a mission. Survive in the Desert. They’re dropped off in the middle of nowhere and who is waiting for them hiding amongst the cacti? Mothereffin’ Producer Matt da Gawd. Producer Matt tells them they have to survive 24 hours out there with only the supplies that are left for them which is basically some wood, jalapeño cheese and a sleeve of crackers. If anyone doesn’t make it, they have to go home. And then Producer Matt drops a bomb. Some dude comes walking out from the caves. It’s Dylan. If he survives, he’s their new roommate. Whut? Why can’t it be Amanda (Please)? Or even Morning Beer? I think they thought more people would not go big and therefore go home and they’d be able to bring Dylan in sooner. So now they have to drop him in because Dylan is a character. He’s a stripper from Boston, with that good Boston accent, even better than Jamie’s from The Challenge. They all survive and Dylan hits it off with Jenna. He goes to college in North Carolina so they can relate to each other even though Dylan doesn’t seem like he shares her prejudices. Who knows, though?

Dylan flirts with Jenna but she has this boyfriend who still won’t call her. Dylan also flirts with Kailah. Dylan makes out with Kailah, mostly maybe to make Jenna jealous? But after, he feels like he made a mistake and so Kailah somehow gets played again. Dylan puts the full court press on Jenna, who for the first time is having fun being in Vegas. It seems like her terrible sorta boyfriend was in the way. Dylan has a kinda girlfriend at home so he calls her on his birthday to break up with her so he can be with Jenna. Then he makes out with Jenna on an escalator leaving a bowling alley. Everybody likes Dylan as the new roommate but nobody can understand what is wrong with him for liking Jenna. Very solid addition to the house.

Dylan and Dean get a mission. They have to strip at the Sapphire Club. They do some practicing and then kill it at the actual show. Everyone is super impressed with Dean’s moves. Dylan does some Magic Mike XXL stuff, too. Dean’s stripper name: Malcolm Sex. Yup. I don’t even have a joke for that. It is too good on it’s own. The only thing I can compare it to was a friend I had in high school used to bowl under the name Malcolm so that when he got a strike, the screen would flash Malcolm X. Dean’s thing is way better. These two eps were gems and I wish MTV would follow my programming strategy and put twelve on at once so I can finally transition into my final form: an anthropomorphized jacuzzi. 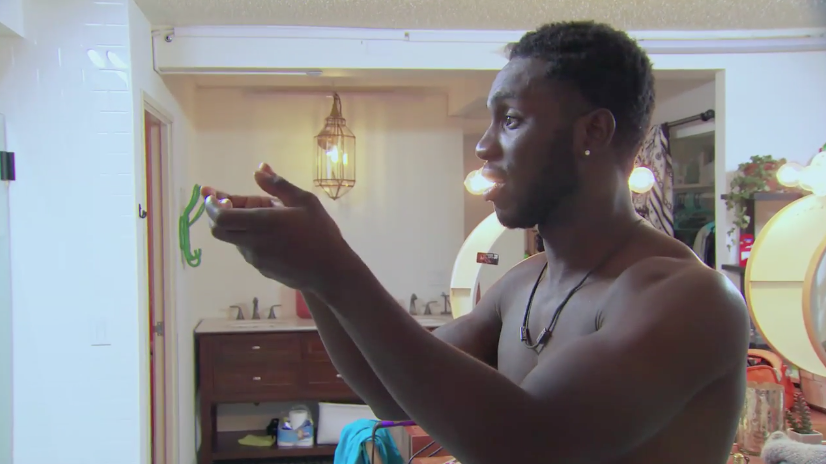