Last night’s Real World: Go Big or Go Home finale eps were so intense that I need to go lie down someplace quiet and unwind for a few weeks. Seriously, after I finished gasping through the back-to-back nuclear house meltdown I was like “I need to watch something less intense I wonder if something lighter is streaming like The Apocalypse Now Redux or The Deer Hunter or maybe a David Cronenberg marathon? That could be nice.”

To quote the most underutilized houseguest of this season slash soon-to-be-rising pop star, Sabrina, “Ceejai rocked Jenna’s face.” The build-up to this has been excruciating. Hearing Jenna’s uninformed opinions all season, watching the way they make the other roommates uncomfortable time after time. For sure, I’ll say that physical violence is never the answer. Ceejai seemed to regret it immediately. Mostly it looked like Ceejai was upset with herself for even allowing Jenna to have that much of an impact on her life. But the issue with Jenna, the version of her portrayed on the show, is that she is completely pathological. She says and does things and then 50 First Dates it and acts like it never happened. “Gay sex makes me sick.” I never said that. “The Confederate Flag isn’t about race, it’s about culture.” Never said it. *Makes out with Dylan on an escalator* He kissed me. As the great wandering carny prophet Dione Pepperoni pointed out: a) I have a memory, I remember seeing / hearing you b) these little black boxes the people with headsets are carrying around are recording all of this. Jenna is the human being version of the Colin Ferguson Saturday Night Live skit from the ‘90s where Colin Ferguson is representing himself in court for shooting people and so he asks the witness to point out who shot him and then ducks behind the podium when David Spade points at him and then Colin Ferguson is like “let the record show the witness pointed to the man in the second row, seat 3.” Jenna’s defense to everything she’s accused of doing is “I didn’t shoot them, they shot me.”

Last week’s episode ends with drunk-tank Jenna running at Ceejai from across the room and getting put down on the ground Dazed and Confused-style like Adam Goldberg at a Beer Bust. The next morning, Jenna says she was blacked out and doesn’t remember any of it. Kailah suggests she apologize so she goes into Ceejai’s room, wakes her up, and says she doesn’t remember it but she’s glad Ceejai handled it the way she did. If you wake someone up to apologize it is officially the worst apology ever. If someone woke me up because my house was on fire and it saved my life I’d owe them forever and still be kind of mad that they woke me up.

But yo, for real, how did these producers let Jenna stay in the house? I’ve been saying this for a few seasons now. The “no tolerance policy” has quickly swerved to the “we’ll give you a warning” to “do you really really promise not to do it again” to “well nobody is in the hospital so….” The roommates were blaming themselves for not voting Jenna out earlier in the season when they had the chance because she couldn’t take part in a mission. That’s a lot of guilt to carry, especially when it was completely in the Producer’s rights to make Jenna leave after she attacked Ceejai. By that point, none of the roommates wanted her there anymore. They didn’t even take a vote (if they did, it didn’t air). Producer Matt, you were my hero. Nobody produced like you. Where were you in all of this? My heart is broken.

After Jenna attacked Ceejai, the next few days are basically a volley of everyone talking about their dislike for Jenna and Jenna loudly drunk-Skyping with her friends for the benefit of the whole house. Jenna calls Ceejai “ratchet” more than once and one of Jenna’s friends goes full Don Imus with an insult about her hair and then tells her to “go pick cotton.” So it wasn’t Jenna who explicitly said that most awful of awful things but she was laughing the whole time. Dean is heated. Ceejai is seething. Everyone in the house is shocked this just got said. Kailah gets a phone call while the Skype is happening. She answers it, yells at Jenna and her friend, and then is like “hi mom.” And even her mom on the line, who isn’t in the house, is like that’s fucked up.

Ceejai gets back into it with Jenna and Ceejai hits her in the face. Multiple times. It takes three Production people to pull her off. You see how fast Production got there? After the first punch. Nobody in sight though when this long buildup was going down and the inside of the apartment turned into the 103 degree atmosphere from the ending of Do the Right Thing. All of this could have been avoided so easily. And you know what, to quote Dazed and Confused “no one ever talks about who won, just they got into a brawl.” Well yeah, that’s not quite true. Because Jenna by the end of the show was already talking about how Ceejai is ignorant, how she attacked her for no reason. Completely leaving out the fact of how Jenna was the initial attacker earlier. And the way the Real World memory works, all we’ll recall is “the punch.” People rarely talk about what led up to CT destroying an entire house, they only talk about him literally trying to rip Adam’s head off his body. The context disappears over time. Ceejai was fun to watch and a great part of this season. It’s a shame it ended this way. Jenna didn’t deserve a black eye, and hearing her tell Production she’s gotten beat down before is rough. Clearly, she’s dealing with her own issues. Hopefully, with the time that’s passed between the show wrapping and airing, she’s done some reflecting. They both are removed from the house, which is sort of beside the point as there are only three days left in the show.

Okay so that was a lot, I told you it was intense. But also some other stuff happened. Sabrina finally met her birth mom who is quite a character. They realized they both like horses at young age and Sabrina’s mom has two horses in Vegas for some reason. They never explain why Sabrina’s mom has like six aliases attached to her name. I’m going to guess it has something to do with the fact that “the guys in her life are scumbags” and leave it at that. Sabrina asks what her background is and her mom is like “Irish and English. And…black, too.” And Sabrina is like “really?!” and her mom goes “nahhhh.” Cool joke ma! The big wrap up at the end of the show said Sabrina’s seen her mom a bunch and is in the process of meeting her biological dad so that is good. I hope she writes an album about it.

Also, Dylan pulled out the lamest “I’m an evil super genius” move ever. He claims that he never liked Jenna at all, that it was all a plan he had when he came in to ruin someone. It apparently was a 37 part plan that included building dependency, inciting an incident, en vino veritas, and like seven other terms he learned from reading Neil Strauss memoirs. Nobody in the house is buying this, not even a little bit. But he did get drunk and draw fake tattoos onto his whole upper body so that’s a solid legacy to leave behind.

In the end, it was a great season with the wildest ending I can ever remember. I’ll miss everyone. I’ll miss Sabrina’s reaction shots into the camera when something ridiculous happened. I’ll miss Dione’s reactions shots into the camera at his own jokes. I’ll miss Producer Matt, who I’m still super upset with over this whole mess. But just like Ceejai, I will learn to forgive. They wanted people to go so big, that they wouldn’t go home. And instead, they got them to go even bigger so that they had to send them home. Until next season, my friends. 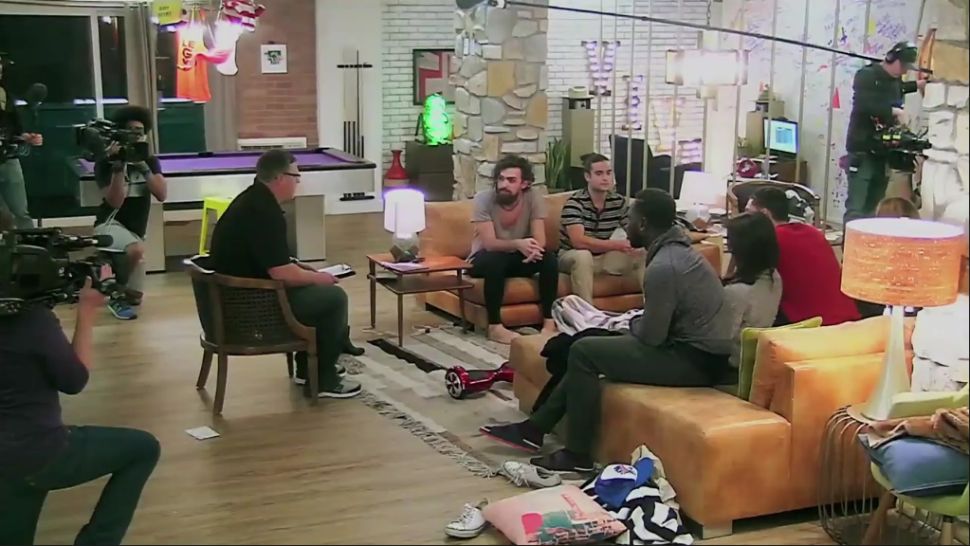