The Ronald McDonald House New York kicked off its 24th Annual Gala not with speeches or dignitaries, but rather, with children. The Waldorf Astoria Grand Ballroom went dark as kids addressed the audience via large video screens. “Shhh…” the smiling youngsters said. “Our program is about to begin.” In a matter of seconds, hundreds of hobnobbing adults were quiet.

This is a story we all think we know: a bedazzled ballroom, the snazzy auction, an open bar. In a busy season of charity fundraisers, it can be tempting to overlook yet another organization raising money in the fight against cancer. But right down to the clown in the step and repeat photo line, this was not your usual party. On Monday night, no one was afraid of clowns.

The gala was emceed by television personalities Andrea Joyce and Harry Smith, with help from their therapy dog, Reggie. All three are longtime RMH-NY volunteers, and participants in the Angels on a Leash program, which welcomes pets to the facility to provide residents with loving reminders of home. “During our weekly visits to the house, this fluffy, goofy dog becomes the most powerful medicine,” said Ms. Joyce.

Before the appetizers were cleared, the event had already raised 3.5 million, with a great deal more likely to be added by the time the coffee was served.

Another steadfast volunteer at the RMH-NY is Tina Lundgren, currently in her second year as Chairman of the Board. Ms. Lundgren, resplendent in a fitted gold frock, brought her own passion and loyalty to the podium. “We provide these families with a home away from home during the most difficult times of their lives.” She highlighted a planned expansion to add eleven new guest rooms, including six suites specifically designated for post-transplant care, to serve families whose immunocompromised children are sometimes confined to the facility for months at a time. Ms. Lundgren takes an active role in supporting the RMH-NY. This July, she will again lead a team of 80 or 90 participants in the New York City Triathlon raising funds and awareness for the house. When asked about the challenges of the event, said Ms. Lundgren, “I always tell anyone who gets involved…whenever you are training and you think you are in pain, it’s nothing compared to what the kids go through on a daily basis.”

As if to remind those gathered of the ability of children to transcend pain, 16-year-old Alexandra Schaney took the stage. Miss Schaney is a Broadway aficionado who has battled neuroblastoma since the age of 4. Even the most seasoned gala attendees could not fail to be moved by her young voice singing “Somewhere Over the Rainbow.” Afterwards, Alexandra’s mother, Kelly Schaney, addressed the audience. “This place made her treatments possible…Because of you, we still have our daughter today.”

Not all families were so lucky. In a sobering reminder of the strides yet to be made in the fight against pediatric cancers, the audience sat in stillness as the names of children who lost their struggle scrolled across the big screen.

The desire to “do more” permeated the ballroom, and the gala recognized two individuals who had done just that. James “Jes” Staley, Group Chief Executive Officer, Barclays, and Oscar Feldenkreis, CEO and President of Perry Ellis International were honored for their many contributions to RMH-NY. Mr. Staley highlighted Barclays’ benevolent activities in both the United States and the United Kingdom, from mentoring at-risk youth to aiding military veterans with the transition back to civilian life. Mr. Feldenkreis was presented as the Apparel Industry Honoree by his father, George Feldenkreis, Executive Chairman of the Board of Perry Ellis International. “You are the son that every father would love to have. You are the best partner… and the best friend I have ever had.”

Before the appetizers were cleared, the event had already raised 3.5 million, with a great deal more likely to be added by the time the coffee was served.

Towards the end of the evening, Howie Schwartz of Grandstand Sports led a spirited contest in which two orchestra row tickets, dinner with cast members, and a backstage tour were auctioned off for the Tony-nominated and wildly popular musical Hamilton.

When bidding on the package finally ended at $35,000, the winner, John D. Idol, CEO of Michael Kors, immediately gifted the prize seats to 16-year-old Alexandra and her mother. “We have the opportunity to stand our tallest when we kneel down to help a child,” said auctioneer Mr. Schwartz. 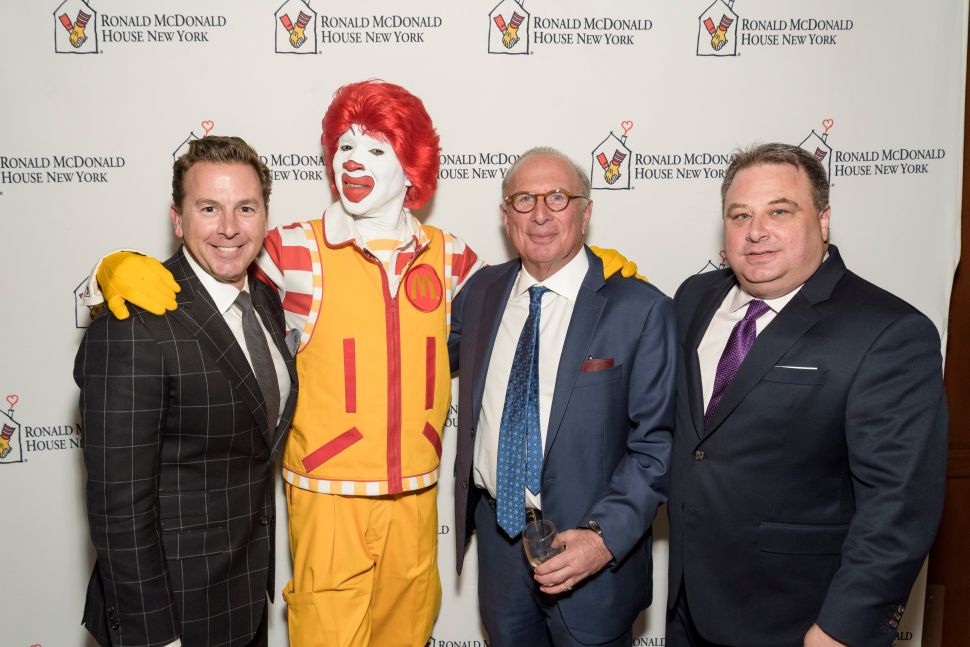