In today’s media, drawing consistent attention takes a particular set of character traits—witness the popularity of Kim Kardashian on Instagram, or DJ Khaled on Snapchat. Their equivalent on the stage of world leaders is undoubtedly Russia’s President Vladimir Putin.

This week, Mr. Putin received headlines for stating Russia would retaliate against NATO’s placement of non-exploding U.S. missiles in Romania. While the U.S. says the system is meant to defend against renegade nations like Iran and knock lethal weapons from the sky, Mr. Putin’s vacuous roars generate attention. He understands the importance of media.

Take Russia Today (RT.com)—the dominant, 24-hour Russian news network reaching over 700 million people worldwide. As one of the most watched foreign news channels in the United States, RT is remarkably effective at influencing people with its pro-Kremlin coverage in English, Spanish, Arabic, German, French and Russian. Funded by the Russian government, the network is also among the 500 top websites in the world. There’s a reason the Russian government has called it a “core organization of strategic importance to Russia.”

This is Mr. Putin’s news network aimed at a universal audience, designed to look like any other objective news outlet. It features well organized news, insightful opinions, useful perspectives on life and events, even a program by Larry King—the venerable suspender-clad interviewer formerly on CNN. RT brings the Kremlin’s propaganda machine to a familiar venue comfortable with international audiences, offering an approach about Russia not usually seen in the west.

Vladimir Putin is creating content, communicating directly to the world without a filter. Who needs Russian media attachés at embassies worldwide when they can reach the world through unique programming?

On Saturday, May 28, a story largely unreported by other media outlets—”Russia developing kamikaze drone that hits target & detonates“—told the public a new Russian drone can now offer both surveillance support and striking capability in a smaller, almost undetectable package. The drone itself detonates if needed like a kamikaze plane. This is Mr. Putin advising his adversaries not to mess with him.

Putin’s use of ‘Russia Today’ to influence hearts and minds by bypassing traditional media outlets demonstrates a keen understanding of today’s landscape—one which the U.S. is missing.

The story then suggests that this isolated incident highlights the “the oppressive environment against women” in Turkey. It struck me as a local tabloid story—not one worthy of coverage in one of the largest international news outlets. But, when that outlet is controlled by the Kremlin—with which Turkey is in dispute—the story receives outsized coverage.

Then there are the Panama Papers, about which conventional media reported that close friends of Mr. Putin were linked to hundreds of millions of dollars. Yet, RT suggests western media used him as the face of the leak because, “Everyone in corporate press is controlled by corporations that profit on wars and have an interest in creating tensions.” RT would have you believe Mr. Putin had no connection to the scandal.

Another article states, “President Hillary? If you think Russian-American relations are bad now, you ain’t seen nothing yet,” and calls her computer illiterate. Millions of Americans, unaware that Russia is behind this news, are reading these pieces and becoming markedly influenced.

RT beats down American policy by exploiting our biggest fears: “The Senate Intelligence Committee has overwhelmingly voted for a new – as yet secret – bill that would allow security agencies to examine a wider range of private data without obtaining a search warrant from a court.”  The Kremlin-funded news organization even praises Oregon Democrat Ron Wyden for expressing outrage against the bill. Mr. Putin, protecting his own interests, uses American outrage to shape U.S. policy.

In the immediate aftermath of Obama adviser Ben Rhodes’ admission that the administration created an “echo chamber” of experts to spin the American public and pass the Iran nuclear deal, RT explained the need for Russia Today in an unsigned op-ed:

“Once upon a time, it was all so simple for the Western establishment… America’s CIA had its Radio Liberty, broadcasting Washington’s ideology to the Communist world. Britain’s BBC and its World Service commended itself on impartiality and promotion of democracy… Then came the 1980’s. CNN revolutionized journalism by pioneering rolling news… Britain’s Sky News, Japan’s Nippon Cable News and the pan-continental EuroNews were among the first follow-up acts… By the turn of the millennium, the likes of Bloomberg, CNBC, BBC World and Fox were firmly established. Meanwhile, Russia trundled along with Voice of Russia, a re-branded, newly open to capitalism, version of Radio Moscow… RT was launched in 2005. It’s now part of a crowded field of rolling news organizations from non-Anglosphere countries…”

Edward Bernays, considered the father of modern day public relations wrote in his book Propaganda, that “The conscious and intelligent manipulation of the organized habits and opinions of the masses is an important element in democratic society. Those who manipulate this unseen mechanism of society constitute an invisible government which is the true ruling power of our country. We are governed, our minds are molded, our tastes formed, our ideas suggested, largely by men we have never heard of.”

Mr. Putin’s use of Russia Today to influence hearts and minds by bypassing traditional media outlets demonstrates a keen understanding of today’s landscape—one which the United States government is missing.

Rep. Edward R. Royce, California Republican and chairman of the House Foreign Affairs Committee recently said “It’s remarkable to see the sophisticated media offense that Putin is conducting… through Russia Today.”  He continues to say that America is not communicating effectively, and he is right.

The Russian government is smart in understanding the new rules of public relations and journalism. America and the west are losing a global information war with the Kremlin. Our leaders need to do a much better job of telling our story—maybe they can learn from Kim Kardashian and DJ Khaled about how to reach and influence mass audiences.

Ronn Torossian is the CEO of 5WPR. 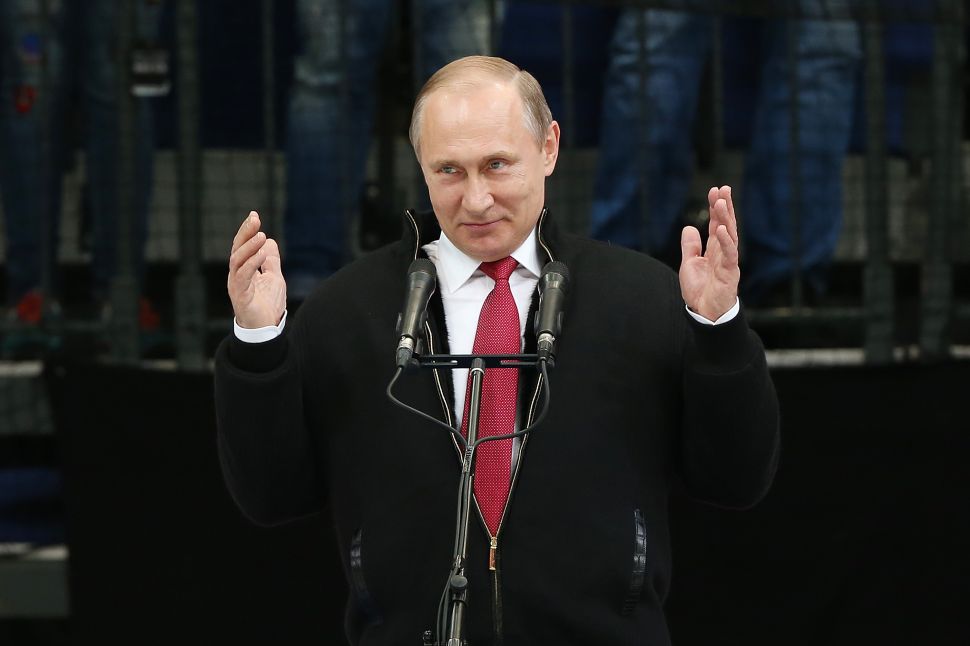