The City by the Bay is known for many things: activism, hippies and the tech industry, to name a few. But did you know it’s also been ahead of the curve when it comes to predicting the next big art stars?

Matthew Barney, Marilyn Minter, Kara Walker and Christopher Wool all had their first big shows here at the San Francisco Museum of Modern Art. The museum, which just opened its giant new expansion this week, has a rich tradition of taking a leap of faith on young artists. SFMOMA’s New Work exhibition series, founded in 1987 as a platform for artists to create ambitious projects or show new artwork, has been the first stop of many who have since gone on to have long and successful art careers. The series boasts an impressive list of alumni including Robert Ryman, Sherrie Levine, Martin Kippenberger, Richard Prince, David Hammons, and Kerry James Marshall.

“We like to work with artists at a time in their career where being at SFMOMA, and in San Francisco, is an important next step,” said Jenny Gheith, assistant curator of painting and sculpture to the Observer.

In 1989, Mr. Wool debuted his now-iconic stenciled text paintings at SFMOMA, and in 1997 Kara Walker showed her black paper cut-outs of plantation scenes featuring acts of sex and violence for the first time on the West Coast. While Marilyn Minter had already been part of the New York scene for two decades by the time she had her first major show at the museum in 2005, it was her more recent hyper-realistic paintings of glittery eyes, lips and body parts that propelled her to superstardom.

Now that SFMOMA’s three-year renovation to add 100,000-square-feet of galleries is complete, New Work has its first dedicated space: a white cube that sits at the juncture between the new Snøhetta-designed expansion and the existing Mario Botta building. Curators have chosen Portuguese artist Leonor Antunes to christen the gallery with a floor-to-ceiling installation, titled a spiral staircase leads down to the garden. The room-sized endeavor features a springy floor made of cork and brass, and large leathery textiles and rope sculptures suspended from the ceiling, lit only by custom floor lamps.

While Ms. Antunes has shown in a U.S. museum previously—her 2015 installation I Stand Like a Mirror Before You was featured in the New Museum’s lobby gallery—her project for SFMOMA is uniquely inspired by female artists and designers, and West Coast history. The show riffs on Modernist architecture the legacies of artists such as Anni Albers and and Ruth Asawa. Ms. Antunes nods to Albers’ work with textiles and Asawa’s woven suspended wire sculptures through her own hanging sculptures. The rope used in the work is a long singular piece that was hoisted and hung through loops. (Extra lays in a pile on the gallery’s far side.)

Last year, during a residency in Los Angeles, Ms. Antunes became intrigued by the unrealized Bay Area project of Swedish-born designer Greta Magnusson Grossman. In 1951, Grossman envisioned a cantilevered residence for San Francisco near Buena Vista Park, but the project never came to fruition. Ms. Antunes’ research on Grossman inspired the bulk of her project for SFMOMA. She has appropriated Grossman’s designs based on measurements taken from her renderings and dimensions calculated at homes built in Los Angeles and Sweden. From those figures, the artist mapped a spacial layout on the gallery’s ceiling in rope, mirroring the lines with a faint engraving in the cork on the floor.

“The gallery has wonderful proportions. It’s a blank canvas, with a bit of natural light that comes in from the oculus,” said Ms. Gheith. The new space also provides more “flexibility” than the galleries in the old building, she said.

But for Ms. Antunes, the white walls of the gallery have been challenging compared with some of the more rustic spaces she’s used for installations in the past, such as the Centre of Contemporary Visual Arts in Bordeaux or the Berlin Biennale. “For me, it’s more difficult to work in a white cube than a more complicated space,” she said. “It’s too much of a blank canvas.”

Next up in the New Work series is Japan’s Sohei Nishino, known for his large-scale photo collage maps of cities. For his show, the museum has commissioned the artist to create a map of San Francisco.

Both Mr. Nishino and Ms. Antunes may be fairly well-known abroad, but if New Work’s track record is any indication, a show at SFMOMA is what could really kick their careers into high gear. 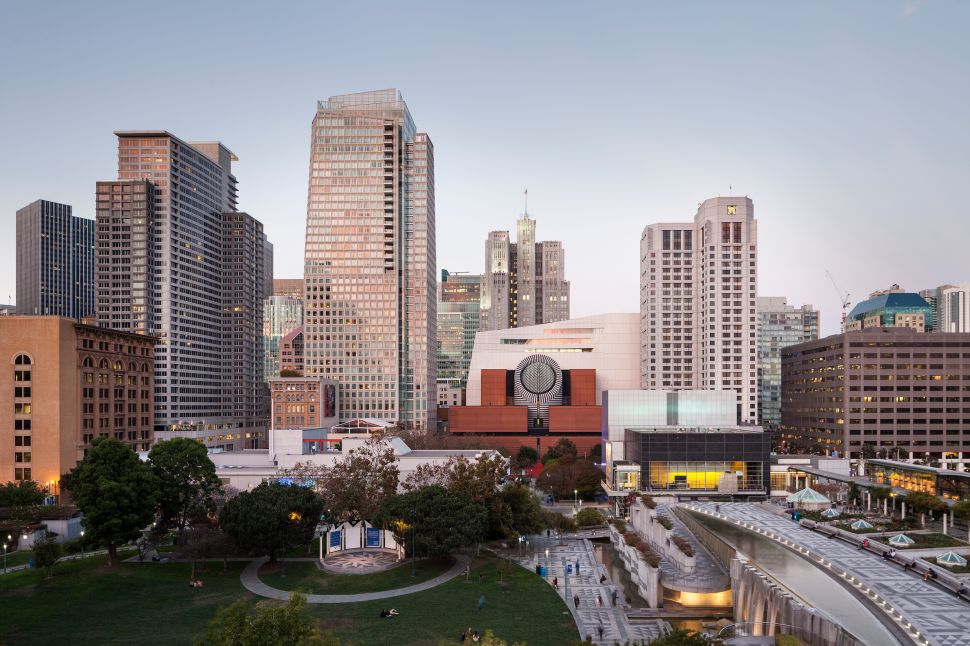