How low can he go?

With federal, state and local prosecutors probing everything from a bribery scandal in his NYPD, to his defunct political nonprofits, to his 2014 fundraising for the State Senate Democrats, to potential straw donors to his 2013 campaign, to his ties to anti-horse carriage groups, to several real estate transactions involving developers and consultants who supported him, Mayor Bill de Blasio’s job approval rating has dropped to 41 percent in the latest Quinnipiac University poll—the lowest level of his two and a half years in office. The survey found 52 percent of New Yorkers disapprove of his performance, and the same number believe he does not deserve re-election next year, at a time when potential rivals might begin to put together the money and ground support for a challenge.

“Heading into his re-election year, Mayor Bill de Blasio is not in good political shape. His job approval hits rock bottom and he even is losing ground among black and Hispanic voters,” said pollster Maurice Carroll.

All of the men are Democrats, and sources tell the Observer that the Bronx borough president is the most likely to take on Mr. de Blasio. A large majority of survey subjects said they did not know enough about any of the three potential challengers to form an opinion of them.

The poll also suggests the mayor continues to be racially polarizing: just 27 percent of white New Yorkers reported holding a favorable view of him, compared to 65 percent who saw him unfavorably. The numbers are virtually reversed for minorities, with 63 percent of blacks supporting him and 28 percent opposing. Among Latinos, 55 percent favor the mayor while 34 percent disdain him.

The scandal wracking the administration of Gov. Andrew Cuomo, the mayor’s nemesis, does not appear to have had quite as bad an impact on the governor’s public image. The poll found that 56 percent of New York City residents back Mr. Cuomo—down from 65 percent at the beginning of the year—and 36 percent disapprove.

The survey gives Mr. de Blasio one thing to smile about, though: his approval rating among Democrats—the people still most likely to decide who will hold Gracie Mansion in January 2018—is still at 58 percent, with 37 percent of his co-partisans disliking him. The poll indicates he would carry more than half of the vote and defeat Mr. Stringer, Mr. Diaz or Mr. Adams by a 25-plus point margin in a Democratic primary.

The mayor’s office has maintained he has done nothing wrong, and that he is cooperating with all probes (except for the one that he’s not). His press secretary dismissed Quinnipiac’s findings.

“The one thing less reliable than the weather is a poll. The mayor will be judged by results, the only real measure of success,” said Karen Hinton.

“The one thing less reliable than the weather is a poll. The Mayor will be judged by results, the only real measure of success. Crime is down; affordable housing is being built; and more and more children are attending pre-K. At the end of the day, voters care about what their elected officials are achieving for them.”

There are also a few top elected officials with a lower approval rating than the mayor: Council Speaker Melissa Mark-Viverito, whom the poll found only 29 percent of New Yorkers support (and 23 percent oppose), a new low for her as well. Public Advocate Letitia James enjoys a 40-20 approval to disapproval rating. 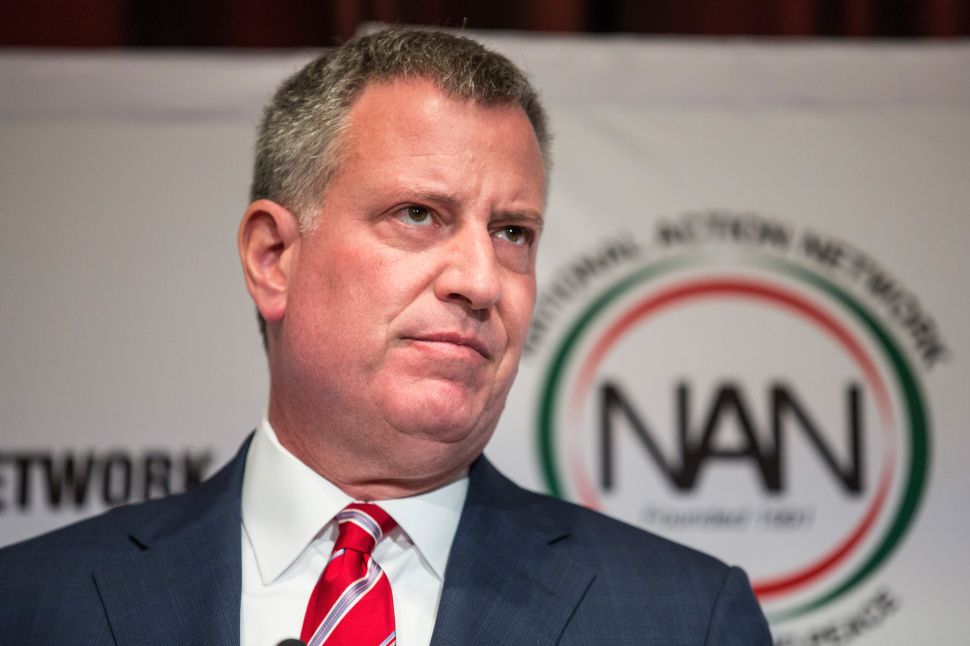