Diamanda Galas doesn’t understand why so many people react to her voice with horror. “People have always been alarmed by me,” she said. “Alarmed! Why anyone would have that reaction. Can you tell me why?”

Well, for one thing, Galas has devoted nearly four decades of her life to singing about genocide, rape, war, extinction, mental illness and AIDS. She also delivers all of her scorched-earth observations in vocals that suggest Linda Blair channelling the Devil in The Exorcist while undergoing a botched tracheotomy.

Consider, too, that for her upcoming concert event she set to music several “suicide poems” by the Italian writer Cesare Pavese, who killed himself for love. The show, which she recently trucked around Europe, will also feature a German ditty whose title translates as “A Man and A Woman Go Through a Cancer Ward”, along with runs at the American gothic classic “Oh Death” and Blind Lemon Jefferson’s seance-of-a-song “See That My Grave Is Kept Clean”. Galas has titled her latest existential freak-out after the Pavese poem, “Death Will Come And It Will Have Your Eyes.”

“To me, this music isn’t alarming,” the singer said. “It’s beautiful.”

Her bewitched fans heartily agree. And there plenty of them. Enough, in fact, to make her upcoming shows—which begin May 10 at St. Thomas the Apostle in Harlem—one of the most anticipated musical events of the season. It helped stoke their ardor that Galas hasn’t performed in her adopted hometown of New York for seven years. Tickets to the shows, which are part of the envelope-pushing Red Bull Academy festival, proved so hot, Galas had to add a second date on May 12, and a third on May 14.

Those resistant to Galas’ no-holes-barred art may consider her little more than the novelty love-child of Morticia Adams and The Marquis de Sade. But she’s actually a highly-skilled, ruthlessly precise and deeply earnest artist. Over time, the now 60-year-old Galas has earned the respect of musicians and artists from the realms of opera, theater and classical music, as well as those of metal, goth and punk. She’s someone all fans of beyond-the-pale art can bond over.

For New York followers, however, a question has long lingered: What kept their once ubiquitous queen of extreme in exile so long? The answer had partly to do with—what else?—death.

Galas’ father became gravely ill some years back, and she cancelled dates to be with him. Soon after he died, in 2010, her mother was told she had two years to live. Galas packed up her things and went to live with her in the improbable city where the singer was raised, sunny San Diego. As it turned out, Galas’ now 88-year-old mother didn’t die. (“She’s one tough broad,” the singer says.) So, by 2012, Galas moved back to New York. At the same time, her Parisian-based manager had all of her connections in Europe, so that kept the star working overseas.

While there, Galas developed the new “Death Will Come…” show. It conforms to her long-established love for matching her piano-based compositions to the words of well-known poets, a rich tradition in the classical world. Galas said that reading Pavese’s suicide poems “transforms my brain. They make me feel as if it’s O.K. to be who I am.”

She insists she didn’t originally intend her whole show to be a song cycle about the end of life, but admits, “When you’re around people who are dying, or are very ill, the question of mortality becomes present.”

It seems Galas has always been drawn to demise. “When I was 10 years old, the principal of our school died and I wrote him a memoriam speech,” she said. “Who knows why a person does these things? I felt driven. I understood from a very young age the idea of the end.”

She credits some part of this to her Greek Orthodox heritage. “We sing death songs all the time because we don’t believe in an afterlife,” she said. “Death terrifies a lot of Greeks. We don’t want to lose this treasure of life.”

‘Who knows why a person does these things? I felt driven. I understood from a very young age the idea of the end.’

She credits as well her father’s specific heritage as an Anatolian Greek. “They were constantly a minority, who experienced genocide,” she said.

Galas learned a lot about music from her father, who played trombone, bass, cello and flute in bands on the West Coast. “I adored him,” she said. “I would do gigs with him from age 13, doing 50, 60 standards a night. He said to me, ‘If you can play “On A Clear Day You Can See Forever” with a drunk who’s changing keys every 10 bars, you can do anything.’ ”

At the same time, her father considered it immoral for a woman to sing. “He’s Middle Eastern Greek,” Galas said. “They believe a woman singing is a punishable offense.”

As a result, she didn’t begin adding vocals to the instrument she’s been playing since childhood—the piano—until she was 28. The singing style she developed took key influence from the dissident Greek avant-gardist Iannis Xenakis. He created electronic works based on everything from architecture to game theory. Yet, Galas wound up sounding like no one else. “I was sick of the categories of music,” she said. “I needed to be able to make the sound that I heard in my head, sounds that I had never heard in the world.”

She started doing so in darkened spaces “where no one from the outside could hear me. I wanted to be free of any kind of perceived censorship.”

Already, she had been dressing in funereal black. That, combined with physical features sharp enough to cut diamonds, made her impossible to ignore. After moving to Europe, Galas got her first break in 1979, when she landed the lead in the opera Un Jour Comme Un Autre. Sponsored by Amnesty International, the show chronicled the torture and murder of a Turkish woman charged with treason.

“I remember one composer saying to me afterwards, ‘Don’t let me see you perform a work like that again,’ ” said Galas with a laugh. “I said, ‘Alright, I’ll make sure you’re alerted so you never show up again.’ ”

‘I needed to be able to make the sound that I heard in my head, sounds that I had never heard in the world.’

Galas’ debut album, The Litanies of Satan, released in 1982, made waves as a largely acapella work that employed the most disruptive, and complex, vocal dynamics possible. She got even more attention in the mid-’80s for her operatic trilogy The Masque of The Red Death, which strove, in part, to capture in sound some of the horrors of the then raging AIDS epidemic. Her brother, the playwright Philip-Dimitri Galas, contracted the disease during the creation of the works. He died in ’86, just before she finished the trilogy. Around that time, Galas became a member of ACT-UP, further politicizing her work.

Galas’ recordings, and live shows, can employ a range of effects, including multiple mikes, quadrophonic sound, and electronics, all to showcase a multi-phonic voice—that is, one capable of striking more than one note at once. Her ability to plumb the depths with her voice brought calls from Hollywood horror directors like Clive Barker and Wes Craven. They knew she could create sound effects that could make the devil himself flinch.

A blues album Galas cut in 1992, The Singer, made her accessible to a somewhat wider audience. Two years later, her next work, The Sporting Life, found her collaborating with Led Zeppelin bassist, and multi-instrumentalist, John Paul Jones. He had sought her out. Galas had no prior knowledge of Zep. “I was not into rock at all,” she said. “I loved The Stylistics and Southern blues.”

Upon hearing the classic-rock band, she said, “Fuck! That’s the bass player I always wanted to play with. He propels the music. What he did was like a mother-fucking cement drill underneath.”

More stars began to acknowledge Galas’ daring and influence. But she feels the singer she’s most often compared to—Yoko Ono—has exaggerated the connection. “She wrote a press release saying, ‘without Yoko there would be no Diamanda Galas, no Bjork, no Siouxsie and the Banshees.’ Would you fucking shut up! I was singing this way 20 years before I heard her voice. Anyway, I had hated The Beatles my whole life. Their music was so bouncy and happy. I don’t like that.”

At the same time, Galas hardly aligned herself with the oppositional goth movement. “I always dressed in black,” she said. “I remember one day my brother and I looked out the window and we saw this person in black walking down the street. Then we saw someone else dressed like that and I thought, ‘oh my God, this is a movement!’ I was wearing black because I was shutting out all the stuff that disgusted me. And a lot of stuff did!!”

Despite her seeming misanthropy, Galas is a delight in conversation, punctuating her dire pronouncements with cackles of laughter. She also scoffs at the cursory perception that her music is about wallowing, or even fetishizing, pain. “It’s about precision,” she said. “Who the fuck cares about hearing another sister seaweed whining away? If you paid for a ticket, it has to be a work of art.”

In achieving that, Galas’ dire music has within it an ironic quality of joy. “Some artists say that going on stage is like going to the guillotine,” she said. “To me, it’s about finally arriving at this place where you can bear your soul, and nobody can do anything about it. There may be misery leading up to that. But, in the end, it’s wonderful.” 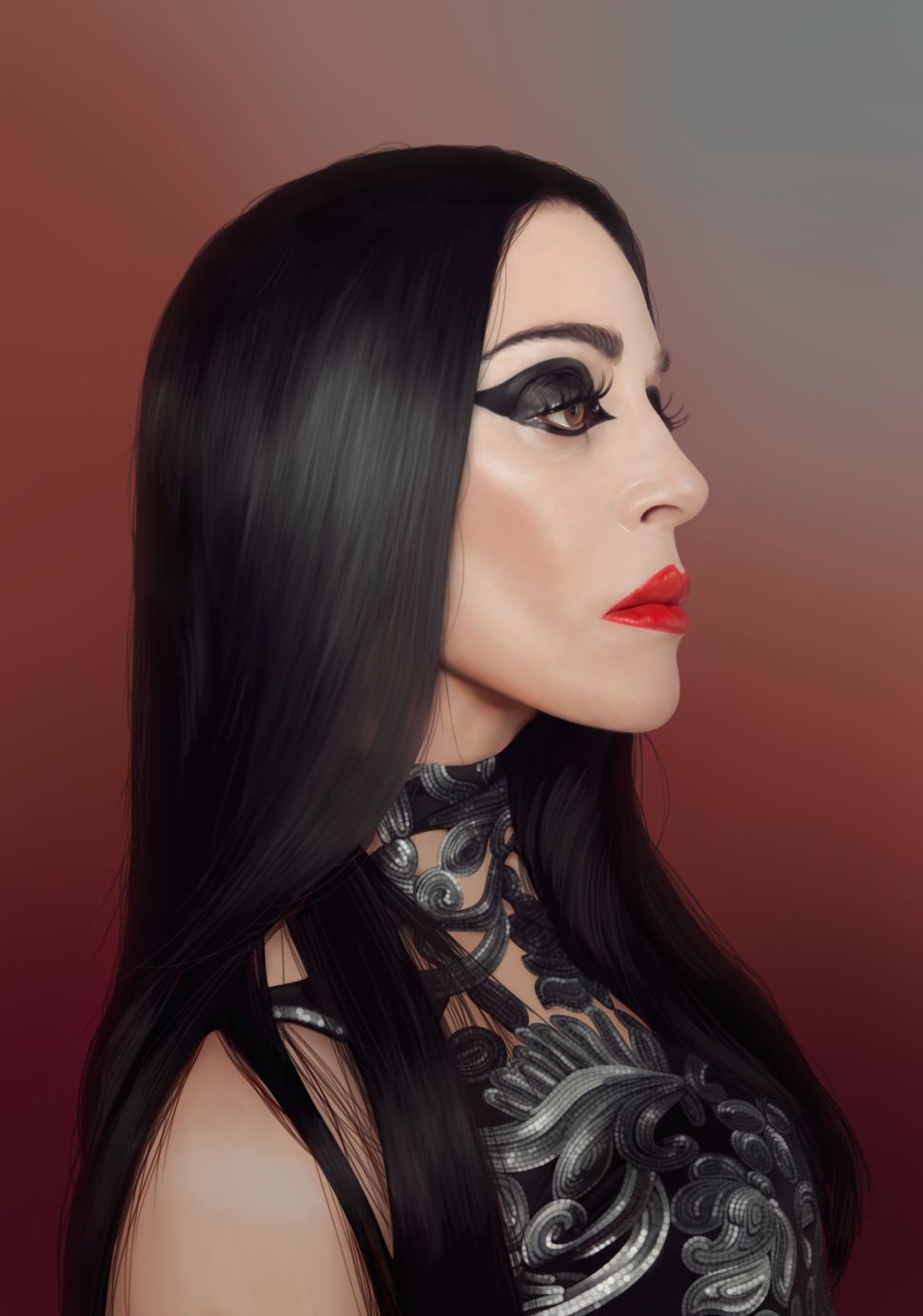