This November, America will elect a Commander-in-Chief, whom we’ll entrust with the duty of keeping us safe in an uncertain world.  Fortunately, this year, fulfilling this solemn responsibility is not a difficult choice.

Donald Trump would be an unmitigated disaster. His foreign policy views – to the extent he has them – are often invented on the spot.  He has a penchant for dismissing close allies like the United Kingdom when they criticize him, and praising leaders like Putin when they flatter him. Quite simply, he has shown no regard for the norms and necessities that so much of our modern diplomatic and security efforts depend upon.

Only one person running to lead our nation has the experience, the interest, and the demeanor to lead and protect our nation: Hillary Clinton.

Hillary understands the importance of stability and consistency – particularly as they impact our most important allies.

Just look at Israel – an American ally whose security is far too important to gamble with, especially when it finds itself under siege.

This March, a 28-year-old West Point graduate named Taylor Force went on a school trip to Israel’s Jaffa port, where he was murdered by a Palestinian terrorist. And tragically, at a time when Israel has experienced frequent terrorist stabbings, shootings, and vehicular attacks, Taylor is only one of many victims who have been injured or murdered.

Under the constant threat of such brutal terror—in addition to Iran’s continued aggression, rising extremism throughout the Middle East, and a global effort to delegitimize Israel—the presence of a strong and experienced American president will be more critical than ever.

As someone who has worked closely with Hillary, I’ve seen her commitment to defending Israel’s national security interests first-hand. When she served in the Senate, she advocated for peace in the region, and co-sponsored bills aimed at thwarting Palestinian terrorism. As Secretary of State, she devised and fought to maintain sanctions that crippled Iran’s economy, and she negotiated a ceasefire between Prime Minister Netanyahu and Palestinian leaders at a critical moment in Gaza after increasing violence and rocket attacks on Israeli homes.

Hillary also believes that no matter how hard it may be, establishing a two-state solution is essential to Israel’s long term security. As the last American official to convene face-to-face peace talks between Prime Minister Netanyahu and President Abbas, she knows how hard this will be but is especially equipped to get this done. And as President, she will continue working toward the goal of providing Israelis with a secure homeland for the Jewish people and allowing Palestinians to peacefully govern themselves in their own state.

But we share more than a defensive partnership with Israel – we also have a mutual interest in developing a shared strategic vision for addressing the joint challenges we face. That’s why Hillary has stated she will expand American-Israeli cooperation beyond military technology, and more fully explore and embrace the links between Silicon Valley and Israel’s innovative technology sector. From securing our energy, to our water, to cyberspace, our two nations can learn much from one another. So we ought to be developing those relationships – especially amongst our young people – for the sake of our shared future.

And at a time of unprecedented conflict and chaos in the Middle East, Hillary recognizes that Israel’s security depends on securing the entire region. Today, an arch of instability stretches from North Africa to South Asia, and extremist groups like ISIS and aggressive nations like Iran actively feed off of that instability and conflict. That means anything a president does or says can have immediate real-world consequences to allies like Israel.

Unlike Donald Trump, Hillary will be a Commander-in-Chief who knows that when it comes to our security and that of our allies – some things are simply non-negotiable.

Over the course of my career as a Congressman, Senator, and Chair of the United States Senate Committee on Foreign Relations, I have been dedicated to protecting America’s best interests and preserving our essential alliances.

To further this commitment, I enthusiastically support Hillary Clinton as the next President of the United States. She is the only candidate who can achieve the kind of long-term peace and stability that our nation has always pursued.

Bob Menendez is the senior U.S. Senator from New Jersey. 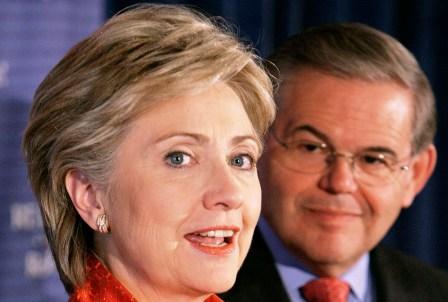