Fans of The Americans continue to remain obsessive, and many are saying that this week’s episode was one of the best ever.

That really was the best episode of #TheAmericans last night

Keri Russell & Holly Taylor killed it this week in #TheAmericans. Still not over what happened towards the end of the episode. What’s next!?

I don't remember the last time I've felt this tension watching TV. This #TheAmericans season is one of the very, very few best since BB/MM.

WOW, WOW, WOW — that "I Love You" had about as much weight as any use of that phrase I can think in modern TV drama. #TheAmericans

Can I just mention the tiniest twitch in Frank Langella's face that caused me to see an actual glint in his eye? Master class. #theamericans

#TheAmericans is having an absolutely tremendous season. Put aside some of your "spy movie" dollars for that, folks.

Give Keri Russell all the Emmys while we're at it #TheAmericans

Seriously, I doubt the people involved with the show care about the Emmys as much as fans on Twitter.

What an episode. 😨 May threaten to set myself on fire if this show doesn't end up in a pool of Emmy awards. #TheAmericans

Sunday night was a tough one for fans of The Good Wife, which aired it season finale. All week, people revealed how sad they were to see the show end.

And it turns out there’s no shortage of photos of Alicia Florrick looking bereft.

Game of Thrones is having a particularly strong season, and Sunday’s episode was another nail biter.

The “#DemThrones hashtag was trending all night Sunday and the commentary was pretty terrific.

Rickon about to be Reek 2: Electric Boogaloo #DemThrones

They still hazing Arya?!? How long she gonna be online before she cross and get her letters?!? #DemThrones

Tommen is playing checkers and the High Sanders is playing Chess. They about to put the MJ face no Tommen. #DemThrones

Dany better learn how to play Scrabble and do macaroni art if she gone be in that old people home for a while. #DemThrones

Samwell must've eaten the shrimp on this Carnival Cruise. #DemThrones

Every time I remember that #DemThrones is a thing, I'm hopeful about the future of the world.

I wish I could go into work tomorrow and tell them my watch has ended. #DemThrones pic.twitter.com/o8cmsILxa2

Gotta love the technicality. Jon died, so his watch ended… I wouldn’t stay with you hoes either. #DemThrones 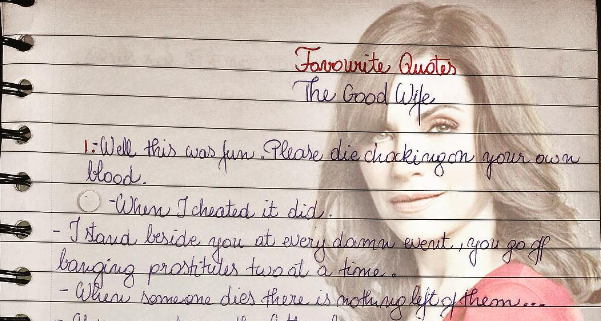 Filed Under: TV, The Good Wife, Game of Thrones, TV