Obviously, the big TV event this weekend was the White House Correspondents’ Dinner, where members of the press corp mingled with movie stars and politicians, with the tacit understanding that everyone in that room can think of a million other ways they’d rather be spending their time.

But actually? Was it even that bad? Highlights!

@Deray @marclamonthill My reaction to Larry Wilmore telling Pres Obama "Ima keep it 💯, you did it my nigga" #WHCD pic.twitter.com/yJmqxeQJ3q

How I feel about @larrywilmore's closing comments at #WHCD tonight pic.twitter.com/fUCDUOM56K

A lot more made “Becky with the good hair” references:

Oh yes I enjoyed the deafening silenced that arose from the #MSNBC table during Wilmore's monologue. pic.twitter.com/5GRmRtLVvi

If FLOTUS strolls in with the dress from #Lemonade, what are y'all gonna do? #WHCD pic.twitter.com/9SN34gO6jh

Maybe there isn’t really that much more to say that wasn’t already said by the President and his team of Snapchat reference writers?

"With that, I have just two more words to say: Obama Out." —@POTUS #WHCD pic.twitter.com/RQSDh92YsU

But if you thought D.C. was run by heartless robots who want to destroy the world, a quick reminder: Orphan Black is a much scarier kind of #nerdprom.

If you’ve forgotten that theInternet is horrifying forever, seriously, check out Orphan Black hashtags. What is this show even about, with those sheep masks? Like I see the clone connection, but honestly the masks are very You’re Next (meets Mad Dogs):

Moving on: Game of Thrones had a HUGE spoiler this week:

"Game of Thrones" spoiler: Still looks like an Evanescence video.

The only way to explain the Wall situation to people who don’t watch the show is with some terrible Trump analogy where the Mexicans have giants and are technically coming from the North. (So…Canada?) Either way, this:

Also, we know so much more about Bran. Like, he’s got a new friend?

Now who the fuck is this bitch? #GameOfThrones

No, but seriously folks:

Tonight on Game of Thrones, I learned that raising the dead is approximately 0.2% as difficult as memorizing a Bar Mitzvah torah portion.

Did anyone else have their fingers SUPER-crossed that this was how Ser Davos planned on getting out of that room?

And just some fun with Bran and Hodor:

So, are we all feeling good? Great! Here’s a couple bucks, go buy yourself a Coke. 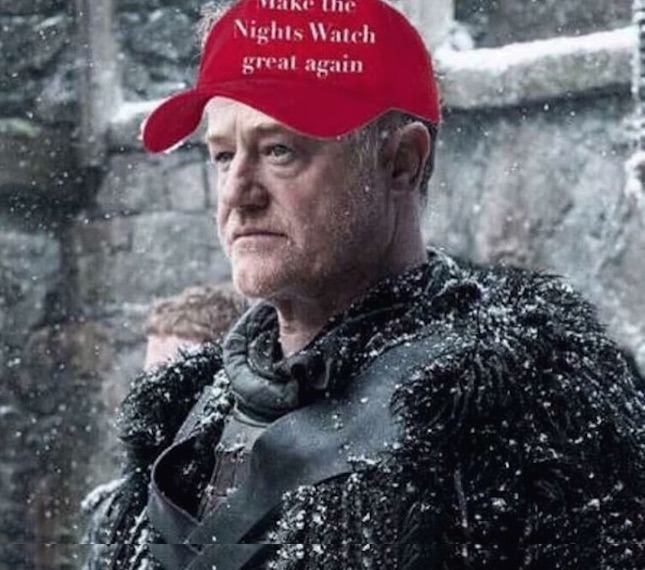