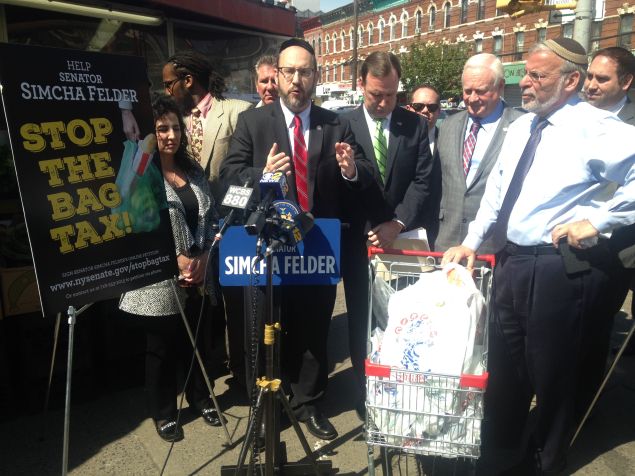 State lawmakers against the bag fees. (Photo: Will Bredderman for Observer)

A group of outer borough lawmakers gathered in Brooklyn today to unveil a bill to stop the city’s recently passed plan to levy a five-cent surcharge on paper and plastic bags.

State Senator Simcha Felder of Brooklyn and Assemblyman Michael Cusick of Staten Island joined a host of other Albany legislators to propose a measure that would bar any municipality in the state from imposing an impost on carry-out sacks. The bill instating such fees, which exempts food stamp recipients and transparent produce bags, cleared the City Council last week over bitter opposition.

“New Yorkers have a difficult time enough surviving in this city, let alone being nickeled and dimed,” he continued.

Mr. Cusick said he empathized with the environmentalist impulse behind the Council bill, but labeled it “misguided.” He noted that the state instated a law obligating stores to have recycling bins for bags on premises, but that the measure has gone largely unenforced.

“This is nothing more than another tax on middle class folks, working folks, in my district and all throughout New York City,” the Staten Island Democrat said. “It puts an added burden on the working people of New York City.”

Other pols were less generous to the city lawmakers who pushed the bill through—Park Slope Councilman Brad Lander and Manhattan Councilwoman Margaret Chin—as well as Mayor Bill de Blasio, who has said he intends to ink it into law.

“I’ve been pretty vocal about this policy since it was introduced,” said Staten Island State Senator Diane Savino. “I called it half-assed limousine liberalism then. I continue to maintain that today.”

It was a sentiment that Assemblyman Ronald Castorina, a Staten Island Republican, echoed.

Supporters of the city measure maintained the surcharge is not a tax, since the extra nickel would go into store owners’ pockets, not public coffers. Backers of the fee note that New Yorkers consume 9 billion disposable bags a year, which clutter parks, cling to trees, accrue into islands in the world’s oceans, strangle marine life and cost the city sanitation system an estimated $12.5 million annually to process.

Mr. Lander has said his intention is to “irritate” New Yorkers into carrying tote bags.

The Council bill would take effect in October, but Mr. Felder said he hoped to pass his measure before the end of the Albany legislative session in June. He was said he believed the bill could not only pass the State Legislature, but gather enough support to override a veto from Gov. Andrew Cuomo if necessary—though he doubted the latter would prove necessary, given the governor’s love of tripping up Mr. de Blasio.

“I don’t know if the governor’s on board or not,” the pol said. “We hope he will be. Especially if it was passed in New York City.”

Mr. Lander attacked the Albany pols for attempting to undermine his initiative, and accused them of conspiring with polluters.

“Given all the other work it seems like they have to do, it would be disgraceful for state legislators to force NYC to continue to send tens of thousands of tons of waste to landfills just to enrich the plastics industry,” the liberal academic told the Observer. 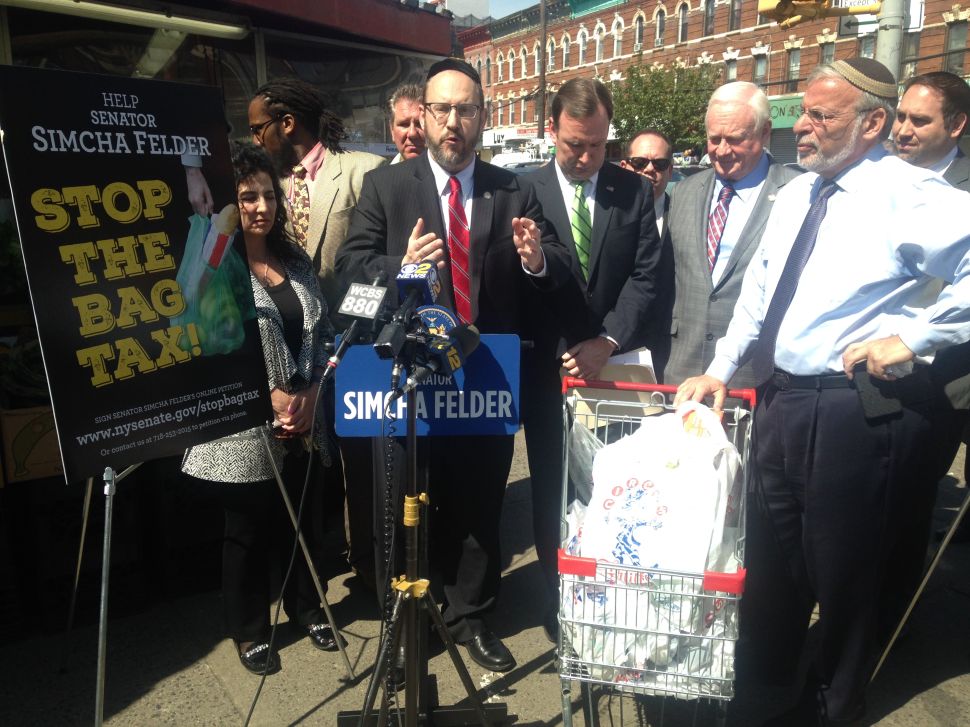