The hottest days of summer will be upon us shortly, and stories about the gender wars over the air conditioning in offices should not be far behind. The perennial conversation about indoor cooling, gender and workplace oppression became heated last August when an (elegantly timed) paper from researchers at Maastricht University came out in Nature Climate Change. In short, the researchers argued that with more women in offices, buildings waste power providing too much air conditioning for women’s comfort.

If this were a Politifact Truth-O-Meter post, we’d slap a “Half True” on the top of the claim. It’s more of a right-answer-to-the-wrong question situation. During the flurry of media coverage following the paper, Building Robotics published a blog post saying that there are more factors determine employee comfort than gender. Calling a thermostat setting sexist assumes that offices necessarily need to pick one setting for an entire space (all the time, every day, all summer—all year—long). They don’t.

In the heating and air controls for a modern office building “you probably have zones,” Lindsay Baker, a building engineer and Building Robotics’ president, explained to the Observer in a phone call. In a large office, today’s system’s central controls could easily cool one part of a room more (for example, one where people sit close together), while a less dense part could receive less. Existing HVAC systems make this possible, but offices don’t use the features.

“The building management industry hasn’t really had an incentive to program the boxes to each zone,” she said, “but those boxes are all plugged into that central brain.”

When we spoke, she gave this example: in a large office cooled to one temperature throughout, a woman with the sun shining on her from a floor to ceiling window might feel hot at the same moment that a man in the inner office might be quite cold.

Which isn’t to say that there’s not a gender dynamic to this conversation. Anyone who’s worked in an office has experienced that tension. Some women say they are cold. Some men say it’s fine. Icy stares ensue. Ms. Baker acknowledges the point.

“It is in fact the case that, all else being equal, women are colder than men by a couple degrees,” she said.

So, fine: Women and men feel differently in the same space, but play that out. Can one thermostat setting keep everyone happy? If it just gets changed once, different people may feel miserable, but the total misery will stay the same.

Several researchers wrote a 2013 literature review of research into thermal comfort in Indoor Air that explained how buildings have operated on research from the 1970s to decide on the ideal temperature for a building (though the standard has evolved over time, including taking women more into account). The practice for decades has been to put a variety of factors together (such as humidity and the sort of clothing people wear) and then define one target temperature to aim for in every space.

“We basically just need to understand that comfort is not just a single temperature,” Ms. Baker said.

The Indoor Air paper discusses a growing academic interest in a new approach, the adaptive comfort model. It suggests ways to adjust air temperature based on different variables, including occupants’ sentiment. Its authors write that there are “statistically significant correlations between building occupants’ perceived control over their thermal environment and their thermal comfort responses.” Translation: people feel better when they think they have a bit of say.

It turns out that many office owners are aware of this, so they install thermostats that don’t actually do anything to provide an illusion of control.

Ms. Baker’s firm has a way to give everyone a bit of real control over air temperature, one that may also lower the boss’s electricity bill. Building Robotics makes a software system called Comfy, which can connect into the brain of the heating and air system for one office or a whole building.

With Comfy, workers can log in and indicate whether they feel warm, cold or just right. If a worker says she’s hot, Comfy will shoot a quick blast of cool air into that zone. On top of that, though, it will take that data point into account as it finds each zone’s ideal temperature, alongside other variables (like how hot it is outside, the humidity and whether it’s casual Friday or not). Green Tech Media did a detailed breakdown of how Comfy works. In short, it’s a system that lets office managers off the hook for finding a consensus temperature and turns the job over to the whole office.

Providing workers with a tiny bit of real control over office temperature will never be enough for everyone to feel perfect all the time, but it should leave more people happy more often. On the flip side, it probably will also mean that men who wear suits every day might not always feel so perfectly crisp beneath their Oxfords as they once did.

That’s a pity, but perhaps offices that are slightly warmer—in parts, anyway, will less mean a hastening of the End Of Men and more a slight delay of global warming’s climate catastrophes. 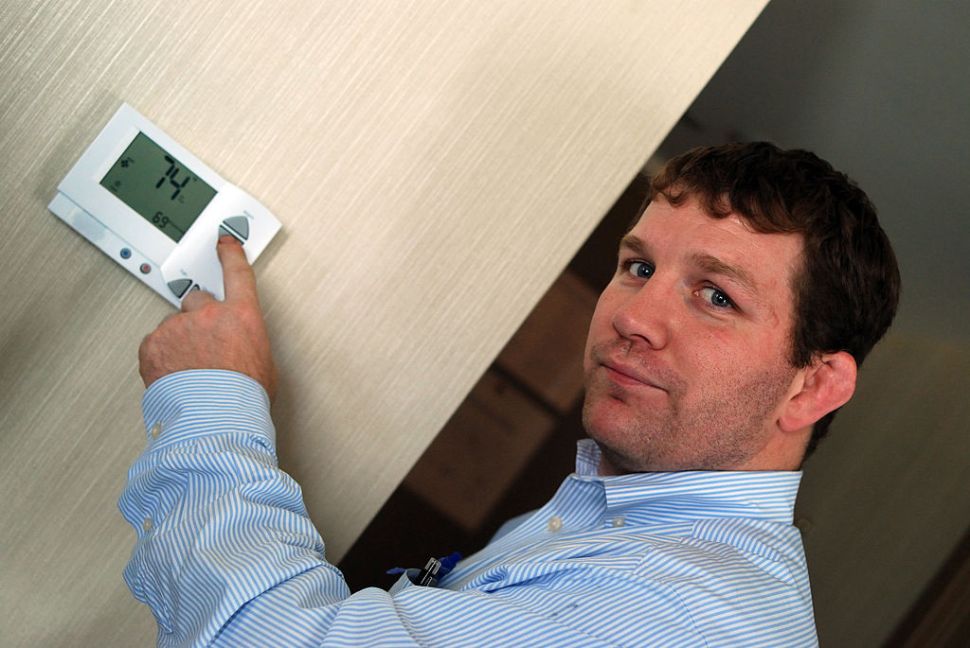