The founder of electric car battery company TankTwo likes to revisit the 2003 Northeast Blackout, when power went out from the greater New York City area and into the Midwest. Electric cars could trigger the same again, because air conditioning already maxes out the power grid in the summer, without adding cars on top.

“If 10 percent of the fleet that exists converts to electric,” Bert Holtappels, founder and CEO, told the Observer, during a recent visit to his outpost in the Financial District, “which is obviously the near term goal, the lights will go out.”

So long as consumers on a Toyota Camry budget have to sacrifice going on roadtrips to make the switch to electric, that seachange isn’t likely. After all, there’s no car in the $20,000 range that can approach 100 miles on one charge, but Mr. Holtappels believes his company has a solution that will at once lower the price and make range affordable, all while sparing the grid from melting. TankTwo’s solution makes novel use of two mature technologies, an insight about the electricity market and—crucially—a business plan that keeps lithium-ion batteries in the recycling pipeline.

“The next step is to build something that moves an actual vehicle,” Mr. Holtappels said. “We’re about seven months away from that.”

Right now, batteries make up 30 percent of the cost of an electric car, according to Bloomberg. The worst Tesla on the market, for example, has around 200 miles of range built in, even though most American drive less than 30 miles per day, because people don’t want cars that can’t make it to the next town’s gas station.

So TankTwo has proposed a novel modular battery strategy that would make it possible to top up a charge in three minutes and even add more battery when needed, as the Observer previously reported. The company fills a normal electric battery pack with egg-like batteries with brains—called string cells—that can be swapped in and out quickly.

“Ours are smart, so they are cheaper and they are more efficient,” Mr. Holtappels said. The batteries can be assembled in any configuration, and they will string together the best way to run power.

Big electric car batteries are broken up into little batteries inside, but those smaller parts cannot change the way the power flows through the system, which means they can’t optimize the flow of energy as different battery components degrade. TankTwo’s string cells can, in the same way telephone networks have been able to effectively rout calls for decades. That’s the first novel use of an old technology.

“If you treat a unit of electricity as a data packet, you have half of our system ready,” Mr. Holtappels, a Nokia alum said. “That’s our great insight.”

Up Against the Grid

Even if electric car batteries magically plummeted in price and Tesla range could be bought on Kia incomes, today’s grid would seize up, Mr. Holtappels contends.

In the summer, utility wires droop from the torrent of electricity powering office building refrigeration. That’s why giant utilities like ConEd go around each year installing free smart thermostats, so they can nudge down consumption when transmission lines approach the melting point.

When is demand on the grid at its most dangerous? Daytime in the summer.

When do people go on big road trips? In the summer.

When will electric car road trippers want to plug their cars into fast-charging stations to top up? Same time.

A driver may cover the first leg of a trip using nighttime electricity, from plugging in at home while the driver slept. If the fleet goes gasless and lots of travelers want to hit Mr. Musk’s supercharging stations on a hot summer’s day, we’ve got problems. What if, instead, that daytime charge could be made from night time electricity?

With stations that can swap batteries, cars can refill in the day with power bought at night.

Except Tesla appears to have given up on changing out whole batteries for now. What does TankTwo know that the pioneers don’t?

In 2013, Elon Musk demoed a battery swapping system that removed an entire battery back beneath a car and replaced it faster than a traditional car could be gased up. Swapping stations would cost about $500,000 to build, according to a report from Gigaom.

But last summer he downplayed swapping to Tesla investors, as the Verge reported. Tesla did not respond to a request for comment on whether or not the company was moving on from swapping, but Mr. Holtappels assured the Observer that it could deliver battery swapping at a vastly lower price.

In Tesla’s approach, the whole battery would be unbolted and switched from the bottom of the car. TankTwo proposes using a tube to exchange the battery guts, in the form of its eggs, which brings us to the second mature technology. TankTwo would turn to Zeppelin to move its eggs using pneumatic conveyance (moving stuff in tubes with air), which the company has been doing for decades. We used pneumatics to deliver mail in some big cities in the first half of the last century.

How it will work?

Mr. Holtappels believes his batteries can compete on the market before stations get built that can perform the fast swapping; however, if his product performs as well as he thinks it will, the market will demand those systems.

TankTwo’s business will be making and managing their egg batteries. “For each of those cells that is ever produced, we maintain historical data,” he explained. The system will know precisely how much efficiency a battery has lost as it’s used. “If you drive like a maniac for a year, and you go to a swap station, you’re only going to get half of what you would have gotten,” Mr. Holtappels explained.

When people swap out empty batteries for full ones, they won’t trade one-for-one. Each egg will trade based on its life cycle value. TankTwo will have an up to the second value for every battery in its database “to keep everyone honest,” he said.

All of this hinges on the fact that there’s this ample gap between the price of electricity during the day and during the night. At a certain point, of course, if enough drivers ditch petrol and battery swapping becomes widespread, then the grid will run at capacity all the time and the price differences between day and night will have become negligible.

That day will only come, though, after electric cars have changed the world so much that there will be no turning back. 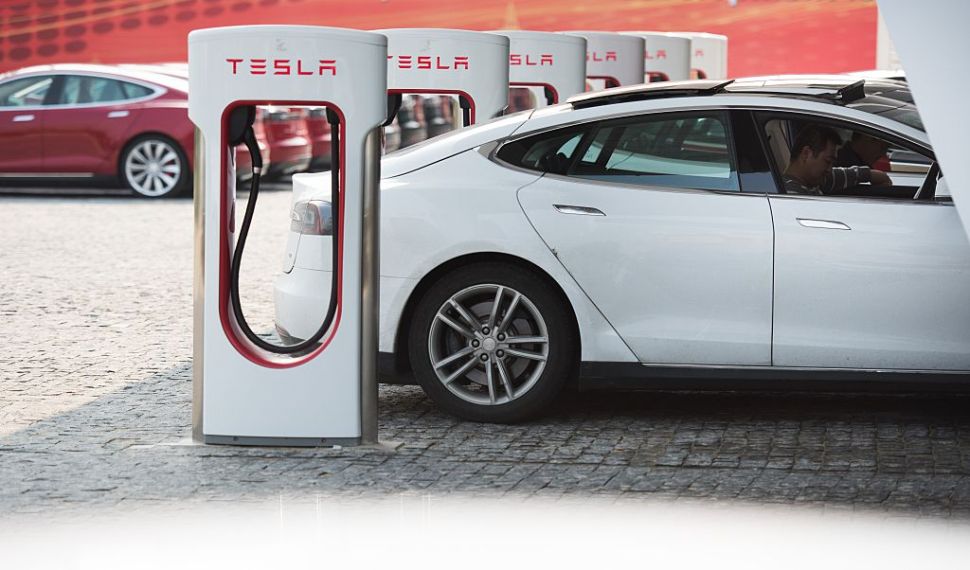