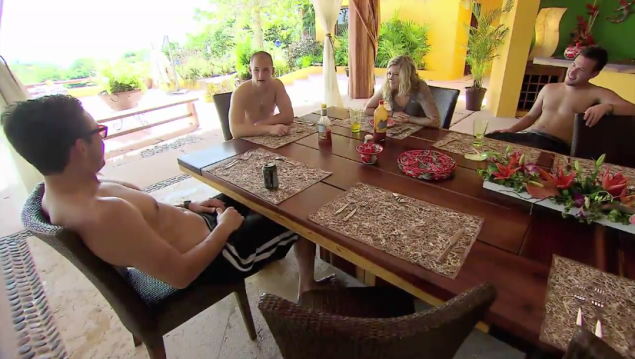 Come all ye gather round the table and hear the greatest tale ever told. MTV

Hi. This is where normally there would be a description of last night’s episode of Challenge Rivals III. Except I can’t do that properly because for the last twenty-four hours I have been laughing madly to myself like Jim Carrey’s Riddler when he’s locked up in Arkham Asylum at the end of Batman Forever. Why? Because the best reality show star of all-time added to his ever-growing legacy. Every time I think Tony can’t out-Tony himself he goes ahead and pulls it off. We are legit blessed to have him on television.

So Tony and Jessica have been flirting. Jessica has a boyfriend but she realizes that he is not a good boyfriend, he is a bad boyfriend, maybe even a terrible boyfriend. And what do we do with terrible boyfriends? We break up with them on television. But first, Tony gets a pep-talk from Wes about taking a shot at Jessica. Wes says Jessica is NOT a “moped.” Wes says this because Wes is perpetually stuck in 2005, the year Real World: Austin aired and Batman Began. A “moped” if you didn’t happen to have the aughts best friend version of James Spader in Pretty in Pink is someone you’d “ride but not tell your friends about.” Tony is convinced that yes, he would tell his friends about Jessica thereby negating her moped status, so he decides he’s going to go brush his teeth and try to sleep with her. What is Tony’s subtle approach to this? Tony gets completely naked in Jess’s bed. Jess calls him Mr. GQ. It’s a proper name, I mean he is a refined gentleman of exquisite taste. Next day, while Jess is on the phone calling off her relationship, Mr. GQ tells a story. “I really did shit my pants last night.” Excuse me, Tone? Well, everyone wants to know, how do you not know if you did that? You’d know. Wouldn’t there be…evidence? Tony doesn’t know because Tony wasn’t wearing pants. How do you shit your pants if you’re not wearing pants? It was in Jessica’s bed. But was there anything there? No, because in the middle of the night blackout drunk Tony maybe went into the bathroom, felt around, didn’t find any “residue”, and then either did or did not clean himself up. Then Tony says “still got it in, though.” So did you have sex with Jessica? “Can’t remember.” How do you not remember? “Jessica says we didn’t.” Okay, so to recap, you definitely shit pants you were not wearing and there was no mess but you definitely did this thing you said you did and then totally had sex except you can’t remember and the other person says it didn’t happen. Words mean nothing to Tony. Some people say things to convey information to other humans. Tony says things to hear the things he wants to hear out loud. Tony is the greatest. Give Tony his own show immediately.

Is there even a point in going on from here? I will try because I am brave and of hearty stock. Vince and Jenna won the challenge last week so they get to pick who goes into “The Jungle.” Vince is immediately strutting around the house and the production team gives him some dope music to peacock to, this song that actually sounds like Vince himself is singing with the line “witness the resolve of the man who would be King” so it looks like Vince is a wrestler coming down to the ring over entrance music that he recorded himself with Jimmy “The Mouth of the South” Hart.

Vince and Jenna decide to throw in the Are You the One? kids because why not, rookies gotta go in first and no you are NOT the one. But they decide to keep Nate and Christina safe because they feel like they want to keep around some easy competition for the later rounds. Nate wouldn’t jump out of the plane in the opening shot of the first episode, which he thought would put a target on his back but actually, you need to carry some dead weight to the end for the easy win. Jenna and Vince put in Briana and Brandon to face Johnny and Jessica, who lost the competition last episode. But uh-oh, TJ Lavin that slippery BMX eel has a SUPERTWIST. Every week, the losing team goes in but then the winning team has to pick TWO teams for elimination. Vince goes with another Are You The One? team because again, THEY ARE ALSO NOT THE ONE. Devin and Cheyenne. I’m actually bummed about Devin leaving, as bummed as I can be which is like XXS bummed because he seems like a character. He said the universe told him he was going in and he also said he was known as a super genius. Personality goes a long way for me, see fave character, mine, Tony. Every week, two teams are nominated, then they alternate picking skulls out of a bag until someone gets the black skull. The other team is safe. It makes the strategy of winning harder because you basically have to nominate someone who will eventually be safe and then probably come straight for you. Briana is paranoid at why Christina and Nate didn’t get put up. Nate is her real life best friend and she’s worried he cut a deal with the veterans. Nate overhears Briana call him fake to Christina. He walks in the room, goes into the bathroom, starts to cry, leaves the room crying, and goes to the gym area to cry more. Look, there’s nothing wrong with showing emotion. Something bad happens, fine. Cry. But getting called fake in a game by your friend is not a reason to cry. Avoid the clap, Jimmy Dugan there is no crying in the Challenge. Okay, there is a lot of crying but not like sober, mild hurt feelings crying. Johnny and Jessica win so bye Devin, maybe you will have a chance to win us over at a later date. NOBODY IS THE ONE.

On a sad note, Leroy was in pain all episode. He was barely able to compete and he had to keep getting checked out by doctors. He even went to the hospital. They said he wasn’t able to participate so he and his rival, Averey had to go home. Bye Leroy, please tell Britney Spears I say hi when you go back to bartending for her Vegas show. Looks like there’s going to be a replacement next week which is always exciting. I hope it’s a clone of Tony and then we’d have two Tonys on the show which is basically what I want to happen if the Rapture is a real thing and I ended up in real heaven which is just Real World: Heaven for me. 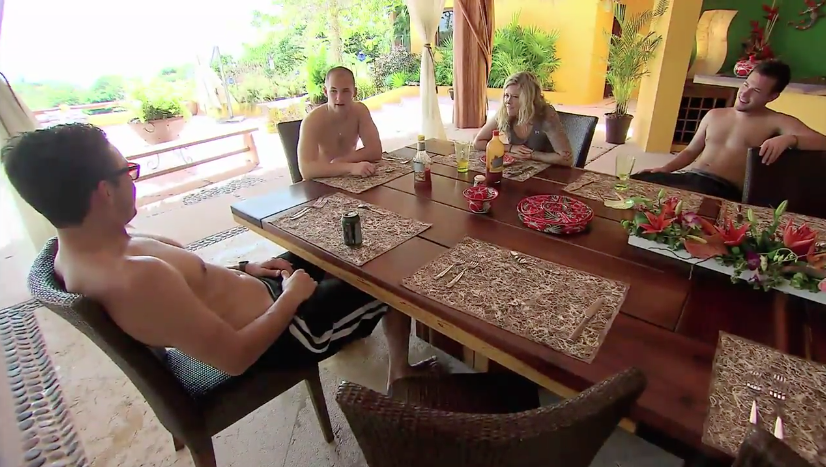