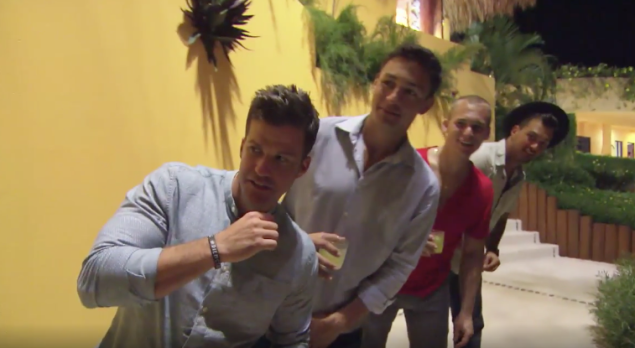 The boys are back in town. MTV

Ever since last week’s challenge Simone has been in pain. The reason that Simone has been in pain is because Simone tore her butthole humping a giant log of soap. If someone asked me to make a list of injuries that sounded like the absolute worst thing that could happen to you, “torn butthole” would be number 3 after “eyeballs exploding” and “waking up in the middle of the night with your knees bending in the opposite direction.” All of these things are made up or at least I thought they were until I heard that Simone actually tore her butthole. Now I am very worried about my eyeballs / knees / butthole. Thomas’s inability to believe he might be sent home because of a torn butthole is the only thing that matches my disbelief that such an injury could occur. But then as the rest of the episode went on, it became clear that Simone with the actual torn butthole is not as butthurt as many other people in the house.

Last week on The Challenge TJ cancelled the elimination round because LeRoy got hurt and had to go back home to being a bartender at Britney Spears Vegas revue. Instead, he was like “I’m going to throw you all a house party.” This is the first time I can remember a TJ Lavin cosigned party so you know it’s gonna be lit because TJ doesn’t do anything medium. Well, lit it was, lit like a sparkler that someone lights but doesn’t realize they’re standing next to a pile of dry leaves with a giant stack of fireworks on top of it so the grass catches on fire and then the fireworks go off and one hits a car so it crashes into a coal mine and everything explodes before the canaries can even tweet a warning. This party has a DJ and a light up dance floor and a bartender and also this one night feels like it lasts about three weeks. I’m not sure this party has ended yet and they wrapped production on this show four months ago. That bartender is still probably mixing up Jetfuel because even though it doesn’t melt steel beams I can’t think of any other fluid that would get these people amped up to fight for 10 straight hours like this unless they’re just mainlining adrenochrome which is milked from the human adrenaline gland and only available in Vegas circa 1971.

Early on, Tony calls for a drama-free night which all but guarantees that this is about to pop off extra huge. If Tony was a broken clock, he’d somehow manage to still not be right twice a day probably because he’d be doing something wild and unexpected with his arms.

Nany got into a fight with Camila because of something Nicole told her. Camila and Nany and Nicole all yelled a lot while the guys look on. When the boys get caught eavesdropping, they all pretend to check out the paint on the side of the house which is basically like getting caught deep in the timeline and accidentally fav’ing something. You just gotta check out the wall and hope they get enough other notifications to miss that one. Eventually, Nany realized she got into the fight for no reason, it was all a misunderstanding. Her apology to Camila was like “yo you listen to me this was a misunderstanding it happens its over I’m done with it forgive me now whatever bye.” Nicole had a big episode because aside instigating this fight, she developed a crush on Nate. Last week Nate cried because his best friend said he was only sort of good at ping pong and doesn’t make such good hot pockets. I mean probably. I assume Nate cries a lot. Nicole has made a lot of people cry. So basically this is a match made in potential tears. Not butthole tears. Eyeball crying tears.

Party is still going strong here. There’s a piñata and Wes dancing with no shirt on. So then the Are You The One? people decide to call out Christina because she maybe possibly has a deal with Vince and Jenna. Obviously she has a deal, this is a reality show and when someone says “we won’t throw you in and then later you don’t throw us in” you say yes regardless of whatever the truth is. It’s like Ray, when someone asks if you’re a God, you say YES. Brianna gets up in her feelings about this and threatens to quit the show. But then her partner Brandon tells her to wait until the morning. It’s still only like 1/4 of the way through this party.

So then Amanda, the human tornado who just showed up last week as a replacement has drunk Tony out at 3:45 AM which is prime time for Tony to say something awful to someone, most likely a woman. Amanda wants to know why The Real World is better than Are You The One? and Tony’s answer is basically because of reality television privilege. See Tony had to deal with real issues on his season like when he went out during the day and drank until it got dark and then didn’t have enough money to pay his bar tab. Amanda on the other hand was on a dating show and got to be in Hawaii. Therefore, Real World much like shampoo, is better. Look there are a lot of reasons that Real World is better but Tony’s reason is not in the top forty-five hundred. Amanda gets loud and Tony calls her a bitch. Jess tries to calm it down but is also disgusted with Tony. Later on, she throws him out of her bed which is dope because Tony looks so confused and I think he slept outside.

Well, immediately after the Tony drama, Camila steps in to back up her partner. This leads to an altercation between Amanda and the always-ready-to-throw-down Camilanator. Amanda actually gets a hand on Camila’s face which I always just assumed held a penalty of death by chair thrown at head. But Camila is a vet now and doesn’t want to get thrown off the show so she calls Amanda a “freckled motherfucker.” Amanda feels like she’s standing up for her crew and repping for “the new generation of The Challenge” which is kind of frightening. I don’t believe in strict gender roles so it’s fine but so far most of the Are You The One? women have fought someone and most of the dudes have cried.

Speaking of which, it’s now 4:35 AM and Brandon talks to his girlfriend and realizes that he really misses her. Dario tries to convince him to stay but he has had enough. Brianna screams at him in the street because he just convinced her to stay earlier in the night while he talks about having “a little homesick in him.” The next day at the challenge, TJ asks if anyone wants to go home? Brandon says he does. Yo, I don’t think anybody hates anything in this world more than TJ Lavin hates quitters. TJ hates quitters so much that one time he broke his TV watching That Thing You Do! because Jimmy sang that “I quit, I quit, I quit” song to Mr. White when The Wonders were in the studio. TJ’s like “don’t take care, hope to see you never.” If TJ Lavin ever said those words to me I would burn up directly into ashes and sweep myself up like Daffy Duck exploding his bill off his face. Everyone records a confessional to Brandon which is basically some version of “glad you’re gone, you’re a waste, hope you never come back.”

Because they were like five minutes away from Jeff Goldblum tapping on the camera and being like “uhhhh, John there will actually be a challenge on this episode of The Challenge, right?” they finally get to a competition. Ashley takes a mean fall and almost lands on a barrel which is floating right underneath her. She nearly landed in there like that lady who went over Niagara Falls for fun. She ended up with a solid gash. Cory got bandaged up, too. The episode ended halfway through the comp with Camila doing a flip into the and not being able to move. Considering last season Tony had to have his spleen removed from falling into the badly, they might want to look at these high drop comps.

We’re now four episodes in and have only had one elimination round which I guess doesn’t really matter if people are going to keep getting hurt or quitting. The winner of this season might actually just be the last time to not die. Or tear their butthole. 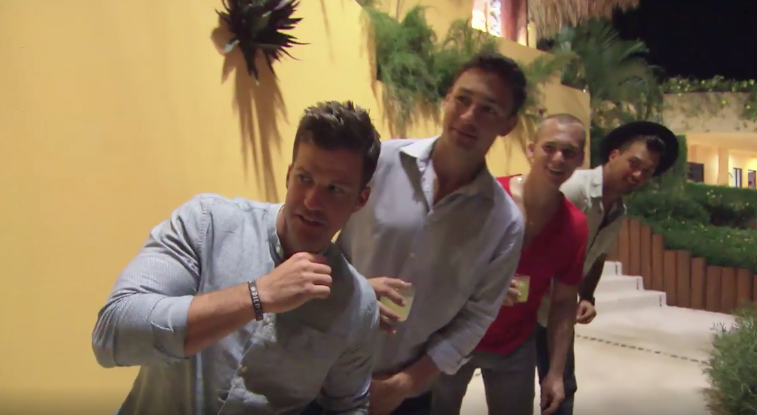