The best part of having a Rivals season is making people that hate each other do stuff together like live in one big house, go to the same disco dance clubs, or hump each other on a giant bar of soap. Yup, those brilliant Challenge game-makers who got Plutarch Heavensbee out here looking like Monty Hall decided to put enemy teammates on a bar of soap bars in order to hump and grind it off harder than your 7th grade dance floor when Next’s Too Close came on.

But before the sexing can start, they need to introduce the replacement players. Last week, Leroy and Averey had to go home because Britney Spears Vegas show called and needed their #1 bartender back. They bring out two more Are You the One? contestants which is like losing something you really care about like your wallet but then someone is like “wait I think we found it, here it is” and then they give you an entire handful of chewed up gum. But yo, I’m a savage beast and if someone does that to me, I’m saying that I didn’t even like that wallet  anyway and then putting all the gum in my mouth and chewing it up. What I’m saying is I’m doubling down on Are You the One?. The Challenge people want to make this happen, I’ma let it happen. So I will be watching the next season of Are You the One?. I could continue to fight this fight against it but what would you rather be happy or right? I’d rather be happy so this is me leaning in. Maybe I am the one.

The new contestants are Amanda and Nelson. Nelson says that people know he’s an alpha and he might be but what he definitely is is a Damon Wayan’s Jr. character. Amanda doesn’t seem to care about strategy at all, she basically calls out the entire house night #1. Of course she ends up arguing with Tony because Tony is at the center of everything great on this show. And Camila, his ex-rival / current-partner comes to his defense. The Camilanator coming to the defense of Tony is everything I ever wanted to happen and I’m actually worried I’m going to get raptured out of my clothes typing mid-sentence because this can only be a sign of the final reckoning or whatever the last rung Aaron Paul is reaching for on the ladder on The Path.

Back to the soapy humping. Ashley puts on a clinic with Cory even though they don’t win their round. She’s moaning and grinding and they drop a beat on her so that it all looks like a cut scene from Spring Breakers. Wes and Nany win because of Wes’s exquisite strategy. Every once in a while Wes still pulls out a gem like “that’s working smart, not working hard” even though he’s been kinda washed the last few seasons. He still manages to get under John Bananas skin so that’s a plus for me. Briana says she doesn’t want to think about Brandon’s pelvic region, she’s just going to pretend she’s sitting on her boyfriend’s %#@*, and they bleep it so I guess we’ll never know what she meant. The best part of watching all this and really why this show is perfect in general is that TJ knew he was canceling the elimination all along. But he had all of them compete anyway. TJ is the Littlefinger of The Challenge if Littlefinger could hit a one-handed no-footed can-can on an S&M.

Nicole for sure had the best line of the whole episode though. Ashley, who previously had hooked up with Jamie the C.O. with the good Boston accent, got lit and got up in her own feelings. Tony suggested she take a few more shots and relax, which means she should have done the exact opposite because Tony might actually be Good Decisions in human form as nobody has ever seen them in the same place at the same time. Ashley thinks she sees Jamie go off and make out with Nicole which very clearly never happens. Ashley throws a fit. And then Nicole is like “I didn’t come here to kiss some prison guard, that’s your man” like it’s the most disgusting idea in the world. Nicole is the realest for real.

Next week will be the fourth episode of the season and we’ve only had one elimination round so far. I don’t care if nobody else gets eliminated and there is no prize and they just show everyone out for dinners the next seven eps. 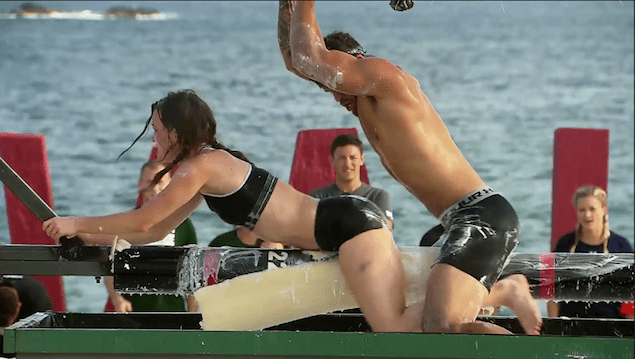