A surreal nightmare about the dystopian British class system set in one of those grotesquely ugly modern steel and glass skyscrapers that are disfiguring the once-beautiful English countryside today, High-Rise is another pretentious exercise in nihilism based on a book by J. G. Ballard, author of the demented Crash, which was turned into a David Cronenberg horror film of monumental messiness. A trash wallow in sex, nudity, violence, cruelty to animals and the skewering of contemporary society, it will predictably appeal to kids and art house patrons who crave the cinematic roller coaster rides of outrage and chaos that lead to downright anarchy. Saner, more rational minds are advised to look elsewhere.

Tom Hiddleston, the versatile British actor recently seen to better advantage as American country-western singer Hank Williams in I Saw the Light, plays Dr. Robert Laing, a young, successful brain surgeon seeking a peaceful escape from the hurly-burly of London by moving to a cold, antiseptic flat on the 25th floor of an austere apartment building on the outskirts of the city with technological advancement designed to meet its inhabitants’ every need except warmth, humanity, charm and the peace of mind and soul that comes from love and self-fulfillment. As soon as the doctor moves into his architectural cinder block, it becomes clear that the pecking order restricts the lower floors to orthodontists, flight attendants, armchair environmentalists, middle-class malcontents like the failed documentary filmmaker and sexual predator Wilder (Luke Evans), his pregnant wife Helen (Elisabeth Moss) and assorted other families. In the upper blocks live the bored aesthetics who pleasure each other in a fog of alcohol, sex, fistfights and costume parties—including a has-been movie star, a single mother (Sienna Miller), a gynecologist with “cold hands” (James Purefoy), the building’s architect, Royal (Jeremy Irons) and Royal’s snobby, aristocratic wife Anne (Keeley Hawes), who rides horses in the rooftop garden like something out of a novel by Daphne du Maurier.

At first, the doctor restricts his nonconformity to nude sunbathing, but as the building begins to show its resistance to perfection (electrical blackouts, unreliable elevators), so does he. At a decadent children’s birthday party he tells a little boy, “When I was your age I was always covered in something—mud, jam, failure.” Soon he’s covered in shame that he finds thrilling and liberating—naked romps with neighbors above and below, a raid by the lower floors on the swimming pool that escalates in an increasing abandonment of reason and eventually murder. Hallways fill with rubbish. A beautiful dog is dragged into the pool and drowned. A man sails off the 39th floor in a suicide leap. The documentarian rapes the women and defecates in his briefcase. The architect and building owner says, “The whole place obviously needs a firmer hand,” then sends the police away to relish what finally erupts in a full-scale class war of sex, drugs, paranoia and tribal anarchy as the tenants, one by one, end up in body bags, headed for the high-rise furnace.

This pandemonium is the work of writer Amy Jump (she also wrote the wacko script forKill List) and rebellious director Ben Wheatley (Sightseers), whose fan base will undoubtedly enjoy more of the blood, sex and violence in which he specializes. I kept waiting for coherence, no matter how eccentric. But the more you try to make sense of it, the less cohesive it becomes. As the class strife between the upper and lower floors brews into a boil and the building rots from within, it’s obvious that the high-rise is a metaphor for pre-Margaret Thatcher moral decay. Still, the prime minister’s own voice at the end, embracing capitalism as the only economic free enterprise system in the world that works, seems less radical and more silly than usual. Since the J. G. Ballard book was written before Thatcher’s rise to power and influence, it also seems like misplaced agitprop disguised as a muddled morass of unnecessary poetic license, if you ask me. 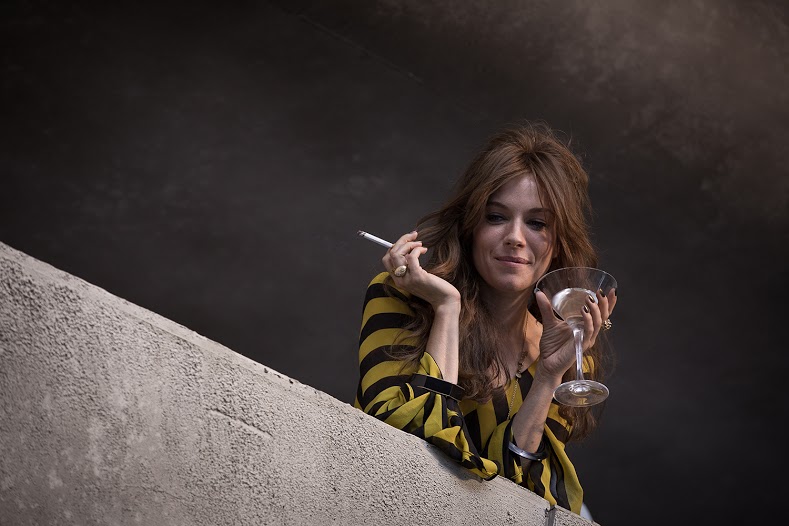