After seven seasons and endless dramas, it’s finally here — the finale of The Good Wife, Season 7, Episode 22, fittingly called “End” — and all I can think about is my worry that they’ll end what used to be my favorite show on television by looking straight into camera and saying, “Well that was a good wife.” I didn’t always live in fear like this, but I feel like the show has been mishandled so aggressively in this final season that it will be impossible for me to let my guard down until the credits are rolling.

As far as we know, we jump right in to the verdict about to be read. Alicia Florrick has re-secured the two-year plea agreement with Connor Fox, and Peter Florrick is resigned to his fate, when it becomes clear that the jury hasn’t actually returned with a verdict, but is merely asking a question. They want to hear the 911 call from the night of the murder, so the brakes are swiftly put on the plea deal arrangements, and the audio is played in court, giving the prosecution and the defense an entirely new piece of evidence to hunt down: an unintelligible sound heard at the 48 second mark in the recording.

Naturally, the only person capable of doing what seems like basic audio analysis is Jason Crouse, whom Lucca Quinn gets to reverse his entire position on not working for Peter or this case by basically saying “please”. And now that I think about it, I’m not sure she even said “please”, I think Lucca is just basically the deus ex machina of this season and the writers are leaning on her insane ability to convince people of things that they’ve never bothered explaining. Anyway Jason figures out pretty quickly that it’s an iPhone ringtone, through the extremely scientific process of playing all of his in a row, and Alicia and Diane Lockhart decide to try to introduce this as new evidence that the jury has to hear, using a case called U.S. vs. Nunez as precedent.

And where did she get this idea? From Will Gardner (Josh Charles) of course, who’s returned to the series as a not-so-shadowy spectre to recommend helpful court cases, provide a sounding board for Alicia, and just basically make her question everything about her relationships. (All in a day’s unfinished business, know what I mean?)

Meanwhile, the hunt for the owner of the ringtone is on, and it’s led straight to Cary Agos, whom Jason berates for more information, pressing him to admit that the missing bullets are likely still in the evidence room; there’s a metal detector right outside the door, and a full search of the room was never mounted. Cary seems at first unwilling to help, but once he sees Judge Richard Cuesta refuse to allow the ringtone evidence into court, or the owner of the cell phone in question, who turns out to be Sutton Foster, his conscience gets the better of him. Cary goes to Matan Brody with his new theory that someone may have “pitted” the bullets, meaning put them into a case that was closing right around the time they went missing.

…which is of course where they’re discovered, by Matan himself, conveniently enough, so there’s no reason to suspect any funny business. Only problem is, Kurt McVeigh is confident that they definitely came from Locke’s gun, so Peter did in fact have plenty of reason to bury them. And since Diane, Lucca, and Alicia have already petitioned for this evidence to be included, they’re in kind of a sticky spot now, and need to back off their previous urgency.

Meanwhile, throughout all of this, Peter is learning that Eli Gold has been steadily siphoning off the Governor’s major donors and encouraging them to take up with Alicia even as they cut ties with Peter. Then she’ll divorce him, which will be seen as a step of independence, therefore keeping these political operatives “in the family” as it were, without exposing them to the taint of the controversy surrounding Peter, whether he’s ultimately proven guilty or innocent. Peter seems understandably shaken by this, as he appears to have assumed what we all assumed — that Alicia would stand by him in the event of his imprisonment, no matter what kind of big talk she was talking about divorce beforehand. Oh and also! Grace Florrick has decided to defer college for a year in order to throw her support behind her father. So now there are two women in this family who are actively putting Peter Florrick’s interests before their own, and it will be interesting to see how Alicia responds to seeing Grace follow in her footsteps like that.

Back on the case, it’s seeming like the only way to mitigate the bullet evidence is to undercut Kurt’s testimony, which Diane is understandably very against. Each woman is coming down very hard on the side of her husband, and the atmosphere is so charged that Diane storms out of the room. Which I guess I’m supposed to use as an excuse for Alicia, who goes behind Diane’s back to gt Lucca to cross-examine Kurt, attacking his credibility, throwing his entire career into question, and asking him under oath whether he had an affair with Holly Westfall, the prosecution’s witness, his former student, and the woman he sold his business to.

And as insane a move as this was on Lucca and Alicia’s part, and extremely out-of-character for who they originally wrote Alicia as, I felt like it was mitigated slightly by the way they chose to film this moment. We stayed tight on Diane as she heard the news, and Christine Baranski had this beautiful, moving moment as she tried to breathe through the moment with her eyes closed. It was the kind of acting I can’t believe they denied us from her all season; this was a moment when she finally got to be let off her leash and have a genuine human emotion, which culminated in her walking out of the courtroom.

It was a brutal move, but an effective one, as Connor Fox’s offers have gotten tastier and tastier. This time, he’s all the way down to a year of probation. And it also caused little ghosty Will Gardner to pop back up with some advice, so it really does seem like Alicia is being rewarded for this ruthless behavior. Peter agrees to take the deal, but on one condition — that when he announces, Alicia will be standing by his side in support. She agrees because of course she does, and has only to ask her newly-empty apartment, “What do I do now?” before Will steps from the shadows again to mansplain her life to her. “You have so little self-awareness,” he says, as if speaking directly to the show’s writers, and urges Alicia to go to Jason. Go get yourself defined by a man, little lady! And don’t let the door hit you on the way out!

So Alicia swoops down to the office to tell Jason the good news — my dead ex-boyfriend says to choose you!! — but he’s mysteriously vanished. And a good thing, too! We still have a full eight minutes left in the episode, so don’t think you’re getting off that easily, Alicia.

We do a hard blackout, and the lights come back up on Alicia and Peter holding hands, on the way to his press conference, her wedding ring prominently displayed, lest we forget that she is A Good Wife. The Good Wife. (Making me nervous, writers, don’t do me dirty on this.) And as if they heard me silently ask them not to make this a spectacle, they put all the pieces in place to do exactly the opposite, having Jason appear as a silhouette backstage, just out of reach, and Diane sidle into position in the front row in virtually the same moment. Alicia looks for a moment as if she’s going to pull away from Peter and go to Jason, but Peter is in the midst of thanking her, so she stays, and the next time she looks over, Jason is gone.

She drops Peter’s hand just as the conference is ending and rushes away from him down the hallway, after Jason, calling his name even as Peter is calling hers. But as she rounds the corner, she discovers it isn’t Jason, and it never was. And even more confusingly than that, the person behind her isn’t Peter, it’s Diane, who steps calmly up to Alicia and administers a single, stinging slap that reduces Alicia to tears. Diane strides away, and Alicia straightens her blazer and walks falteringly back toward the camera, toward truly god knows what. 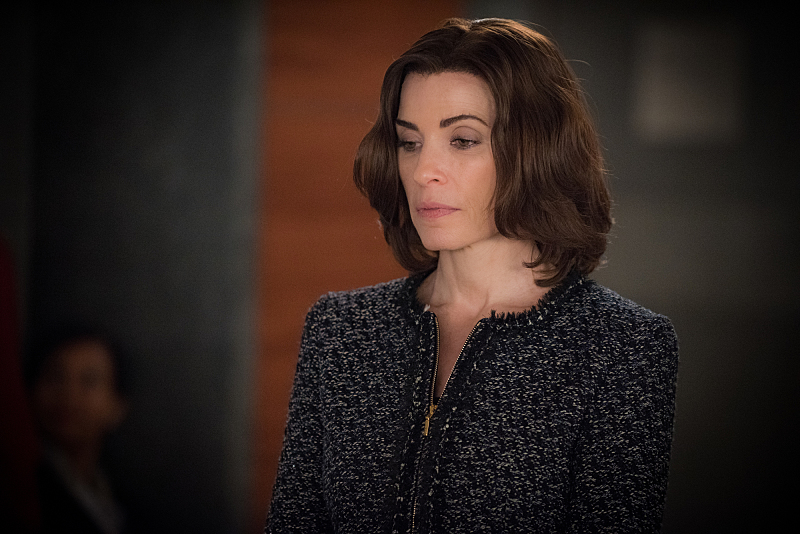