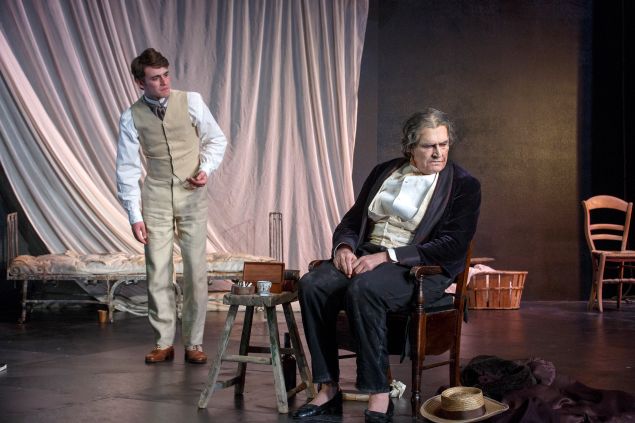 When David Hare’s play The Judas Kiss— about the tragedy of gay icon Oscar Wilde and his passionate love affair with Lord Alfred Douglas (a.k.a. “Bosie”) that landed him in prison, destroyed his health, shredded his reputation as England’s greatest living playwright and hastened his early death at age 46—first opened on Broadway in 1998, it was massacred by the critics, and so was its miscast star, Liam Neeson. But now the play has ripened with age, and in a glorious new production imported from England and starring Rupert Everett, it is one of the season’s triumphs. It’s at the atmospheric Harvey Theatre at the Brooklyn Academy of Music through June 12. Don’t miss it.

The play is divided into two separate periods in Wilde’s turbulent life. The first half is set in London’s Cadogan Hotel after the collapse of Wilde’s ill-advised libel suit against the vindictive Marquess of Queensberry (Bosie’s crazy father) for publicly calling him a pervert and a sodomite. The case tanked when the defendant’s attorneys rounded up a group of rent boys who agreed to denounce Wilde as a sexual playmate for a proper sum. The case was dropped, but the damage was done. The court convicted Wilde on charges of gross indecency and, to his horror, sentenced him to prison. While Bosie (played with proper degrees of sexual insinuation, annoying snobbery and aristocratic hypocrisy by Charlie Rowe) taunts him for “surrendering to the jaws of defeat,” Wilde’s loyal friend and ex-lover Robbie Ross (an excellent Cal MacAninch) packs his bags, cashes a check for him and hires a cab to whisk him off to the station to catch the last train for the ferry to France. Historians and dramaturges have puzzled for years over Wilde’s refusal to save himself from ruin, and David Hare says he’s been plagued by both the wit and torture of one of the world’s most popular and accomplished playwrights since he was 10 years old. The reason for Wilde’s self-destruction, he concurs in this play, was sacrificial love. And there was another paradoxical character flaw that is wonderfully dramatized in The Judas Kiss—despite the brilliance and analytical mind on display in comedies of manners like The Importance of Being Earnest and Lady Windermere’s Fan, Oscar Wilde was also a childlike romantic, immune to the crass vulgarities of the average man that often led him down paths of self-destruction. With the London police marching toward the Cadogan to snap on the handcuffs, Wilde ignored the pleas of his friends to escape in haste, ordering instead a lavish meal of lobster and Dauphinois potatoes smothered in sauce and perusing the reading material Robbie had packed for his journey into safe exile in France. (“Dickens? Egad!”) “I shall not run down the hole they have dug for me,” he says arrogantly, convinced that his inevitable date with disaster is a figment of some fictional character’s insolent imagination. Imperious to the end.

In Act Two the action moves to a shabby hotel near Naples after Wilde has served two punishing years in prison at hard labor. Sick, broken and penniless, he spends his last franc to reunite with the irascible Bosie against the advice of his friends and family, including Wilde’s disgraced wife Constance, who threatens to divorce him unless he rejects Bosie once and for all. Instead of offering sympathy or moral support, Bosie pouts, whines about how he is as much a victim as Wilde and romps naked with a luxuriously nude Italian fisherman he has picked up in the village. As a final straw, Bosie announces that his mother has paid him a handsome sum to leave Wilde forever and, for a penultimate insult, infers that his homosexuality was perhaps always a deception. Betrayed to the end, his legacy diminished, Wilde still manages to deliver one final kiss to his obnoxious, beloved Bosie, providing the play with the Biblical reference in its title. Amazing, isn’t it, how time changes everything? Oscar Wilde now has a cult following, his films and plays never age (how many times have you seen The Picture of Dorian Gray?) and he’s constantly being revived on some stage somewhere. The Cadogan Hotel in London, where he was arrested, is now a tourist attraction, and the once-shabby hotel in Paris where he died is now a boutique charmer called, simply, L’Hotel. It is booked months in advance. When I stayed there, in the tiny suite where he lived that has been preserved just the way he left it, Ava Gardner was in the bar sipping cognac.

The Judas Kiss is a sensitive character study of a brilliant but damaged artist, directed astutely by Australia’s Neil Armfield, acted by a superb cast and grounded with swells of special compassion by Rupert Everett, in the most human and deeply moving performance of his career. At 57, he is no longer the lithe, youthful and glamorous matinee-idol of his early films, but he has matured and thickened into the kind of spellbinding theatrical centerpiece who can control an audience’s emotions even when he is seated, sated and exhausted. For whole stretches at a time in The Judas Kiss, you feel like you are spending quality time with Oscar Wilde himself. Liam Neeson was all wrong physically in the original Broadway production, but Mr. Everett is almost as perfect as Stephen Fry was in the film Wilde—close to the man once described as a “big, soft walrus.” 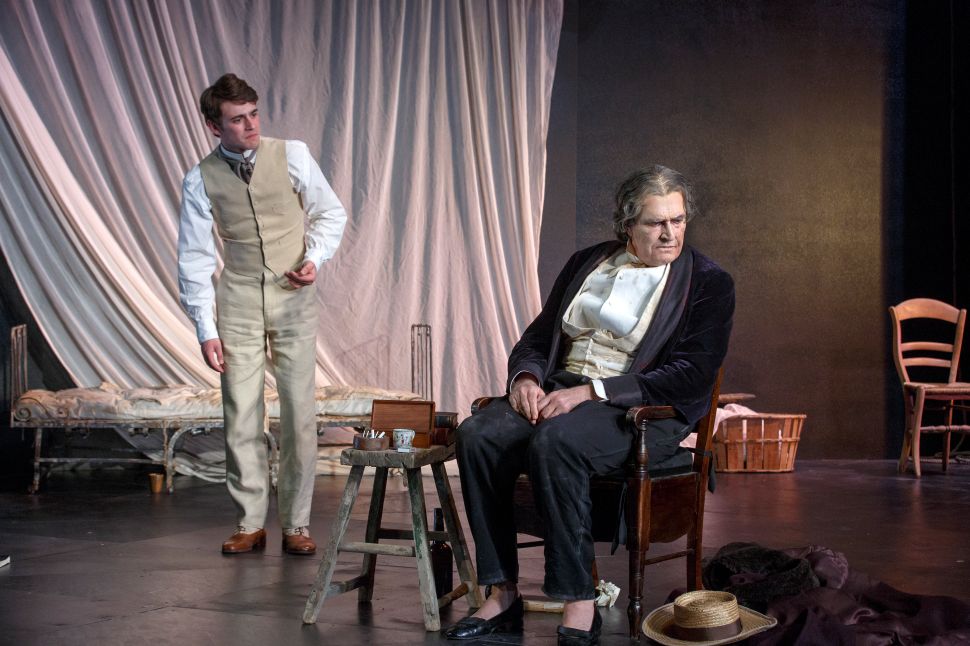