Very early in the morning of May 21, 1985, Pet Sounds exploded around my flapping, revolving, inside-out dimensionless-timeless chemically-wracked brain in a sunburst of rainbows and reverb, evoking echoes of future past, echolocations of past futures, bittersweet melodies and studio-tan smiles.

Two dear and trusted friends, both magicians of music transformed into East Village timelords, took it upon themselves to introduce me to LSD and the pink-Everest-highs of Pet Sounds, all in one incredible night.

At the time, Pet Sounds was exactly 19 years and five days old. I was about 10 weeks past my 23rd birthday.

The evening began with mad, childish dashes through Tompkins Square Park, sinister weak-yellow street lamps squinting on us as vials crunched underneath our high-tops and brave rats stood their ground. Were there any stars above us? I did not notice, though I ran, without comment, to 2nd Avenue and 12th street because I had correctly predicted that a friend from the future would be leaning out a window looking for me.

Soon we adjourned to the fourth floor of a rust-brick walk-up on 14th street between 1st and 2nd Avenues, parchment-colored hallways smelling of radiator steam and cabbage, the linoleum floors dipping in the center as all great East Village apartments once did.

I sat in a giant puppy-soft chair of unknown but likely ironic origin and watched the tie-dyed purple midnight sky turn the color of a roseate diamond. I observed the ducks in a thrift-store painting fly out of their frame, and I was gently remanded for attempting to step out of the open window and test the blur between life and death. But mostly, for hours that had no minutes, I lived inside the exotic Dixieland ta-das, Summer Place sad strings, turn-signal-tic guitars, angel-glow harmony stacks, Loving Feeling heart-beat bass and chiming radio-century vibes of Pet Sounds, a life-changing piece of music that became a friend for life and said you are home now, you have found the Mother of All Records.

After that long night (which ended in the brutal white light of the Path Train, where I found myself surrounded by elves), no more painted ducks took flight and the horizon between life and death never again blurred so enticingly; which is to say that was the first and last time I ever took LSD.

This one experience, in the loving hands of wise friends who wrapped the bursting hymns of Wilson around me, was so perfect that even at the unwise age of 23 I had the wisdom to know I never wanted to try it again, that it was too dangerous and my one ride had been too perfect.

This week Pet Sounds, the greatest pop rock album ever made, turns half a century old. It still brings me the same deep and resonant joy I found on that night 31 years ago.

The speck of a psychedelic stamp I licked didn’t trick me into hearing anything that wasn’t already there, and I am still awestruck by those caverns of emotion, the aisles of instruments blending into one rich harmonic trill, thrill, strum and sigh, and the melodies that soar to Shambhala and back, carrying a Teddy Bear and a tear with them.

This unprecedented and inimitable blend of innocence, sophistication, exotica, Gershwin, Copland, Ives, the beach, the campfire, the Mississippi and Hollywood is a God Album: one of those extraordinarily rare moments when unprecedented genius finds both a window of opportunity and a path to visibility. Yet there are two specific factors that make Pet Sounds absolutely historically and conceptually unique.

With Pet Sounds, the Beach Boys became the first small-ensemble electric rock band to go off the reservation and make an entire album that completely departed from the small-ensemble rock band format. Of course, others had done it for a song or two, but no one had said, “This will be a complete album that can not be performed by four or five guys plugged into amps.”

Very shortly before Brian Wilson began formally recording Pet Sounds, the Beatles released Rubber Soul, which almost indisputably ushered in the era of album-centric rock by announcing that LPs could be more than “just” a few singles, a few covers and some filler tracks; but by and large, Rubber Soul, even in its relative conceptual and musical complexity, adheres fairly strictly to the idea that the four Beatles could stand in front of you and play the thing fairly faithfully.

‘Pet Sounds’ is truly a teenage symphony to God, a collection of holy moments that never let go of the heart, a bubblegum cathedral of harmony and empathy.

With Pet Sounds, Wilson absorbed the “whole album” concept, but he expanded the idea exponentially by asserting that rock bands could make entire albums that sounded absolutely nothing like a plugged-in rock band. Subsequently, the Beatles, hugely inspired and influenced by Pet Sounds, created Sgt. Pepper’s, which also almost wholly deviated from the intimate electric ensemble concept. Once the Beach Boys let that cat out of the bag, the whole ship of rock sailed to new ports.

Here is something else about Pet Sounds that remains virtually unique: Of all the deliberate, calculated and carefully composed album-length works that we label “masterpieces,” only Pet Sounds is written from the teen or adolescent point of view.

Whether you are talking about Sgt. Pepper’s or OK Computer, Dark Side of the Moon or Thick as a Brick, The Kinks Are The Village Green Preservation Society or The Lamb Lies Down on Broadway, none of them are about the everyday hopes, heartbreaks, lusts, woes, wishes and ambitions of an adolescent male. From beginning to end on Pet Sounds, Brian Wilson and lyricist Tony Asher tell a story that most any young person can empathize with, without the slightest sidetracking into astral planes or tricky emotional or historical metaphors.

It’s one thing to invent a new musical vocabulary, a psychotropic freight-train hop through a century of American musical memes, but it’s quite another to anchor it so completely in the land of teen angst; this makes Pet Sounds, truly, a teenage symphony to God, a collection of holy moments that never let go of the heart, a bubblegum cathedral of harmony and empathy.

Ultimately, this all makes me have a rather giant amount of respect for Mike Love, who appears to have sensed that Brian’s quirky avant-folk rock needed to be rooted in an empathetic adolescent perspective.

‘Pet Sounds’ was a moment in time that became utterly timeless

There’s something else unique about Pet Sounds’ landscape, which distinguishes it from virtually every other ambitious “big-picture” LP that came in its wake: even if it’s not recorded by an small-ensemble electric rock band, Pet Sounds does sound like it was recorded by one group, and from first note to last, there is virtually no deviation from the musical topography created by Wilson and The Wrecking Crew.

Often geniuses want to display all the remarkable tricks up their sleeve; SMiLE, for instance, is full of the oddball quirks and hiccups that usually characterize “masterpieces,” as Brian Wilson got lost in the fog of the possible. Pet Sounds, on the other hand, is aurally a unified whole, and therefore creates a virtually seamless and ecstatic listening experience.

Oh, and the only true version of the album is the mono version (this is something else it has in common with it’s music hall manqué, Sgt. Pepper’s, though the absolute superiority of Sgt. Pepper’s in mono is something I will discuss at another time).

A true stereo mix of Pet Sounds wasn’t made until 1997, and although the stereo mix is very instructive to musicians and academics who want to parse the tracks and the vocal arrangements in greater detail, just because you can x-ray the Mona Lisa and see the rough sketches underneath doesn’t mean that the rough sketches should hang in the Louvre.

Though I will note this: on that night long ago when a walk-up on 14th Street was lit by an Aurora Borealis beaming from an electric brain running on all its over-heated and enhanced cylinders, I could have sworn I was listening to Pet Sounds in stereo. In fact, I was so sure of it that I recently tracked down one of my guides, who assured me we were most definitely listening to the mono version.

There are a many other places where one can read about the extraordinary musical construction of Pet Sounds, and analyze its fascinating contents. I’ll leave that kind of scrutiny to others, and just say that Pet Sounds was a moment in time that became utterly timeless, an endlessly renewing and rewarding work of art that needs no chemical enhancement to cause the listener’s brain to luxuriate in a planetarium of imagination. It is the greatest album of all time, probably by about 20 or 30 lengths. 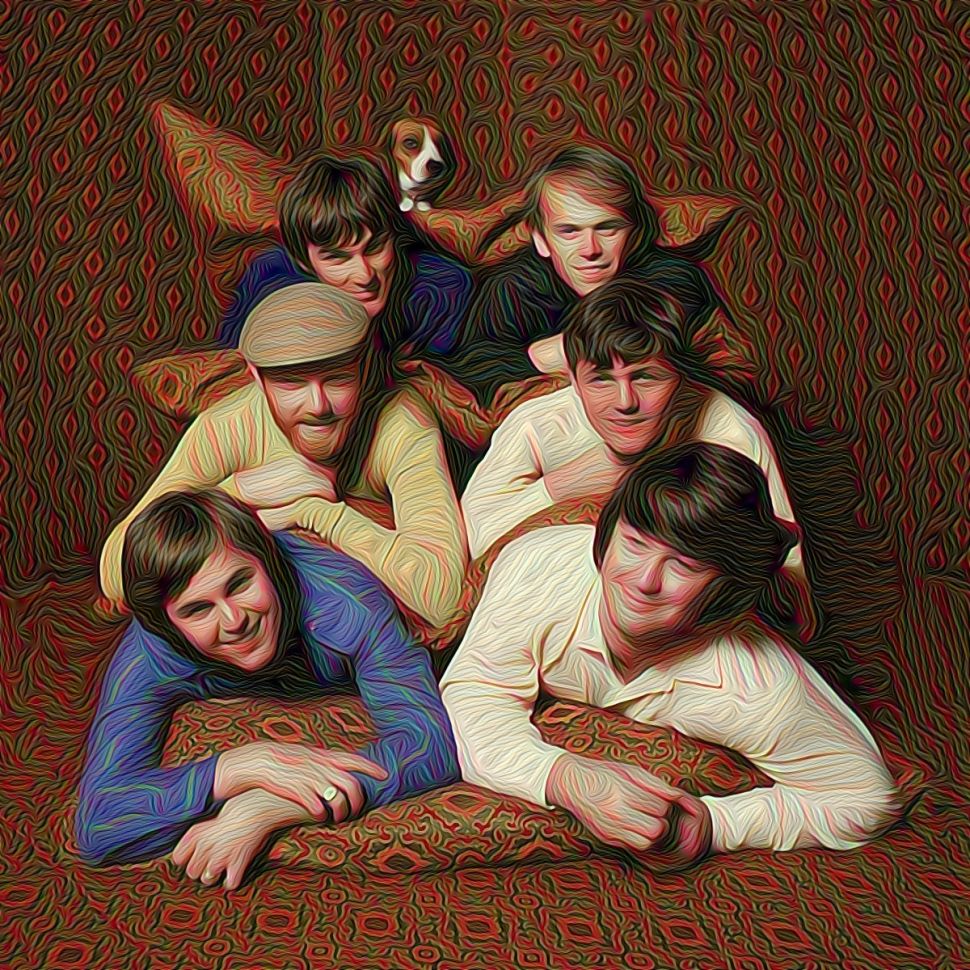