Toast is one of the most famous faces on Instagram, second only to her father, social media sensation The Fat Jewish. Toast’s mother is Katie Sturino, Joshua Ostrovsky’s wife (better known as ‘The Fat Jew’) and the style blogger behind The 12ish Style. For the uninformed, or folks without Instagram accounts, Toast is surprisingly similar to most super chic Manhattanites, only she’s an adorable dog. With ToastHampton (okay, Ms. Sturino is credited as the author, because who wants to read a book written by a dog?) she’s written her first book about her glamorous life.

The book, released just in time for a Hamptons visit this Memorial Day weekend, shows how truly bougie the social media superstar is. Toast is *spotted* lounging on glamorous pool floats, spending time frolicking on the beach with her siblings (more on them later) and wearing cashmere cable knit sweaters–it’s basically the ‘gram game of any basic heading to the Hamps on a helicopter, only when an adorable dog partakes in those activities, it’s far more worthy of likes.

If you’re not one of Toast Meets World’s 354,000 followers, then you’re probably not aware she starred in Karen Walker’s ad campaign, posed with Karlie Kloss and appeared on the Today show. During a recent puppy playdate in Battery Park, Ms. Sturino told the Observer how your dog can become famous on social media, an inquiry she often receives.

When you’re plotting photos, make sure to catch the dog looking less than lovely–but still precious. Toast’s most popular photos are after bath time. “People really like when Toast takes a bath–soggy Toast photos. And her ‘swalking’ videos. When you carry her she moves her arms like she’s swimming in the air–swim walking,” Ms. Sturino said about the most liked images. Another surefire way to make your dog distinguished is with costumes. Ms. Sturino had someone make a custom outfit for Toast, inspired by the movie Her, and the account took off.

If you’re going on a walk with Toast, expect unsuspecting bystanders to stare and stop you–which could be overwhelming if you’re trying to walk your own dog to the bodega while wearing loungewear. “She has two siblings, and you see the three of them and think, ‘Oh, cute dogs!’ and then you look again and you recognize the whole team,” Ms. Sturino shared.

Toast has the most followers, with siblings Muppet The Wonder Dog and Underpants The Dog (Call Me Pants) trailing behind. Still, just because they’re celebrities doesn’t mean they don’t have their problems. “They’re more like frenemies. Pants doesn’t have an alliance, or an allegiance, or any relationship with them, she’s kind of like a roommate. Muppet and Toast have a rivalry–a real one, that people think I made up,” Ms. Sturino told the Observer, sharing a recent story. “When I first got the copy of the book, I left it on my couch, and there’s a whole big couch and the book is on the end. Muppet pushed it off and was laying right in that spot.”

Toast is an extremely elegant creature–no Kibbles ‘n Bits for her. Instead, her interests are the Hamptons, Tate’s Cookies, Barneys, Freds, Karen Walker sunglasses (for the shoot she had a stylist and a wind machine) and staying at The Surrey. Toast wouldn’t exactly be a fan of fitness classes. “Getting up early–she really hates that, you have to pick her up and take her out of bed–and she glares at you. Sometimes she doesn’t like walking. If she doesn’t want to walk she’s going to stop and ask for a ride. She loves flying on planes, she hates coach, she loves first class,” Ms. Sturino divulged.

Now, before you consider quitting your day job to pursue making your dog Instagram famous, know that it’s a full time commitment. “When I first started the Instagram and said, ‘Toast is going to be famous!’ people said, ‘You’ve got to get yourself checked out.’ Now she has been on Good Morning America, that’s when people [start] to understand. Otherwise, they just literally think you’re looney tunes,” Ms. Sturino explained.

Ms. Sturino believes Toast owes her fame to a variety of important factors. “She’s toothless, her tongue hangs out, and what really brings it home for me is the rescue component–the fact she and all her siblings are puppy mill moms. There are a lot of famous dogs, but I think the fact that she’s a rescue is very special.”

So what advice does Ms. Sturino have for aspiring celebrity pooches? “I think the biggest thing people don’t understand is how much work it is. It’s one thing to take pictures for a week, but you have to take them for content every single day. You have to network with other people on social media. It’s a lot of work,” Ms. Sturino pronounced. So, before you start ‘gramming photos of your canine, remember that it could turn into a full-time job…but if said job means flying first class and spending your days at Barneys, it sounds like a perfectly lovely occupation. 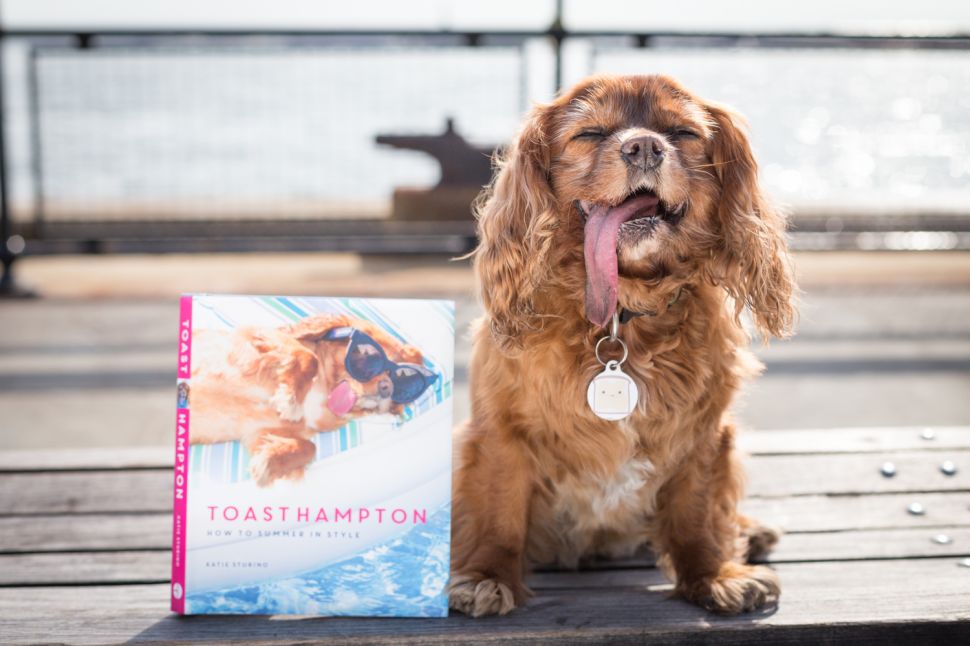