The talk of Frieze New York was not Leo or the profusion of paintings, but a donkey named Sir Gabriel.

Gabe, as his agent calls him, is the stage veteran appearing in a recreation of Maurizio Cattelan’s 1994 exhibit with the unwieldy title “WARNING! ENTER AT YOUR OWN RISK. DO NOT TOUCH, DO NOT FEED, NO SMOKING, NO PHOTOGRAPHS, NO DOGS, THANK YOU.” The project is on view at Frieze courtesy of the Daniel Newburg Gallery through sunday.

Gabe, who has also appeared in the Metropolitan Opera’s production of La Boheme, was installed at yesterday’s press preview for Frieze in his spacious pen, casually munching and occasionally rolling in his hay.

Every two hours he got a 20-minute break to walk around and eat grass, said his agent/ handler, a representative of All Tame Animals, a company whose logo is a dog sitting in front of a movie camera.

“We do donkeys, dogs,” said agent David Peloza, who sat next to Gabe while he was an art exhibit at New York’s second largest art fair, and jokingly offered fairgoers Gabe’s “autograph,” which, uh, did not smell great. “We did the sheep at the Armory [art fair] last year.”

Gabe is 15 years old, a stage veteran and a darling to New York artworlders right now. He was the most-often mentioned part of the Frieze fair, and though some accused him of “seeming sad,” we’re pretty sure he had more room and better treatment than the humans at the event.

Before his venerable stage career, Gabe worked in Central Park as an amusement, carrying toddlers. Now, he mostly does operas. “He lost a part in a ballet to a pony last week,” Mr. Peloza said. “They always end up going with ponies.”

The Observer asked if PETA had been around, asking about the donkey’s treatment. That particular organization had not been by, the gallery assistant standing at the entrance to Gabe’s pen said, but other animal rights groups had been protesting.

“I’m not sure what they’re protesting against,” she said. “If he wasn’t here, he’d be at the opera.” 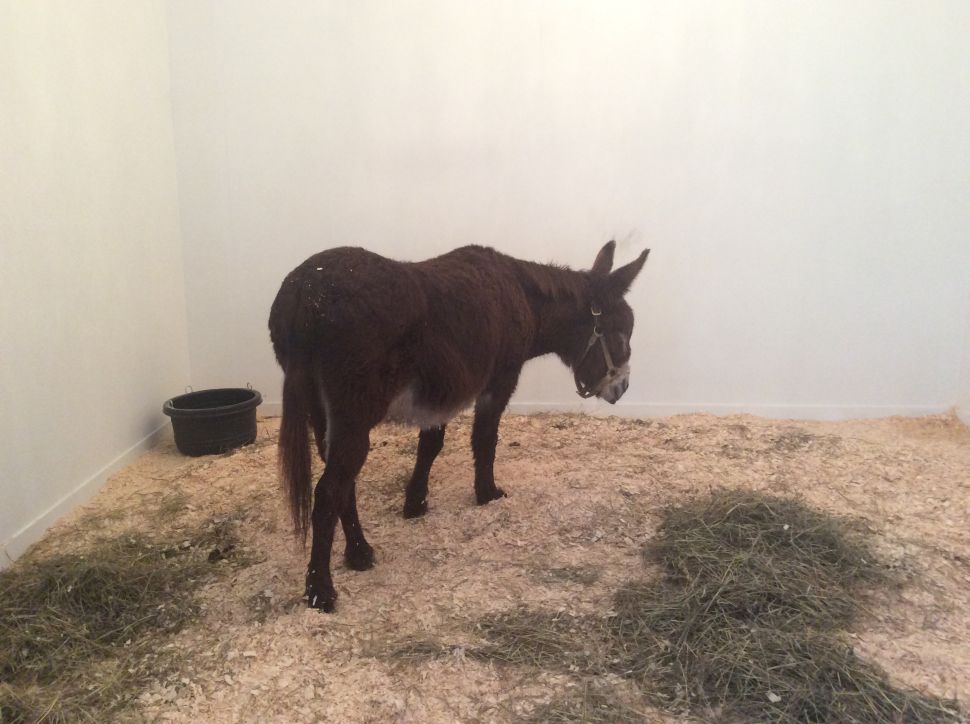