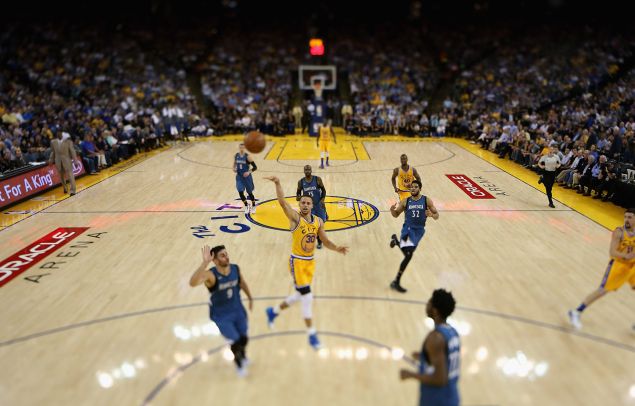 Stephen Curry #30 of the Golden State Warriors goes up for a shot against the Minnesota Timberwolves at ORACLE Arena on April 5, 2016 in Oakland, California. (Photo: Ezra Shaw/Getty Images)

When Amazon drops off a package at your home, it’s as if you are at
one end of a wormhole in the space-time continuum. How did that
package get to you? Who knows? You just know it arrived. You might be
sad that your local bookstore went out of business, but you sure like
that you can now whip out a device, order the latest Stephen King
novel (or a neon yellow, full-body, spandex suit) with a “1-click.”
And if you subscribe to Amazon Prime, you can get the package
delivered to you tomorrow. Being at the receiving end of the wormhole
is a utopia of convenience, and it feels so good when you come home
from work and find that hoped-for package waiting for you.

Amazon has mastered the art and science of moving packages from point
A to point B.

Which brings us to Stephen Curry, the Golden State Warrior point
guard, superstar and (unanimous!) selectee as the Most Valuable Player
of the 2015-16 NBA season. Curry has mastered the art and science of
shooting a 9.5-inch-diameter basketball from at least 22 feet
way—swoosh!—into the 18-inch-wide hoop to score a 3-pointer. Some of
Curry’s long-distance shots are so improbable and so difficult to
defend that they appear to violate the laws of the space-time
continuum. His “dizzying, borderline, mystical shot-making,” as Robert
Silverman of The Daily Beast put it, has inspired scientists, stat-loving researchers and even video-game makers to try to quantify the physics of his ball delivery system. Like Amazon, Stephen Curry owes his success to his ability to move an object from point A to
point B with great speed, accuracy and frequency.

Innovators master the art and science of moving things from point A to
point B. We benefit from their innovations even though we desperately
miss what’s been destroyed.

When it comes down to it, almost all innovation is about moving
something from point A to point B—but doing it better, faster, cheaper
or with a higher quality than it was done before. Innovators who
engineer new and improved ways to move an object—whether a ball, a
package or a person—from point A to point B can change the world. When
these new innovations first arrive on the scene, whether it’s the
telephone moving the human voice, the passenger train moving human
bodies or the internet moving human knowledge, they create such a
sense of wonder that they do seem to violate the laws of the
space-time continuum. Social theorist David Harvey uses the term
“space-time compression” to explain how technology can collapse
spatial or temporal distance. In 1851, a British author sounded the
alarm about a about a Victorian Era version of a wormhole created by the
passenger train. “Time, our best and dearest possession, is in
danger,” he wrote, describing how time was being forced to obey “the
laws of a railway company.” But of course, someone has to engineer
that wormhole: The railway company with its inventors, engineers and
workers; Amazon with its software designers, supply chain managers and
warehouse foremen; or Stephen Curry with his body and a ball.

Austrian economist Joseph Schumpeter popularized the term “Creative destruction,” writing that a capitalist society like ours, “incessantly revolutionizes the economic structure from within, incessantly destroying the old one, incessantly creating a new one.”
He compared capitalism to a severe storm system that regulates itself
with the “perennial gale of Creative Destruction.” But one man’s
creativity is another man’s destruction. Disrupters like Jeff Bezos
and his Amazonians might be radically “creative,” but the people who
lose out, such as bookshop owners, only experience the “destruction.”

But who exactly is the destroyer? It’s us, the consumer.

Americans in the 1850s ditched the Pony Express when telegraph
companies developed the technology to send messages from one place to
another at the speed of electricity. Who was going to pay for a
horse-and-buggy ride when a motorcar could transport them much faster
from here to there? Why go to a record store when Apple can deliver
songs straight to your phone? Once you’re in the wormhole, you’re
never coming back out.

It all begins with the early adopters who are the first to embrace the
latest thing. But these futurephiles only make up about 13 percent of
the population according to Everett Rogers’ diffusion of innovations
theory. Most of the rest of us are purists. Deep down we want the
world to stay pretty much the same. Every generation romanticizes the
good old days; every generation gripes about newfangled things. But
even though we might resist the siren call of technology, eventually
we will all succumb.

Which brings us back again to Stephen Curry. Some people grumble about
Stephen Curry and how his epic long-range missiles have changed the
game. Behind the so-called Curry backlash is the disturbing feeling
that even though his play is radically creative he’s “destroying” the
game that we know and love. Mark Cuban, owner of the Dallas Mavericks,
wants to change the rules so it’s harder to make a 3-point shot. Some
former players are yearning for the good old days when the heroes were
big men who battled below the basket. Even Stephen Curry’s former
coach Mark Jackson accused him of “hurt[ing] the game.” Why? Because
when Jackson goes to high school gyms he see kids, and “the first
thing they do is they run to the 3-point line.”  The nerve of these
kids—modeling their game on the greatest player of the day rather than
the stars of the past!

One of the strangest ironies of great innovations is how the
perception of such advances changes over time. Yesterday’s futuristic
wormhole is today’s object of nostalgia. Take passenger trains. They
evoke in us a sepia-toned feeling of yesteryear. Trains! Such a
charmingly quaint way to travel that people take vacations to nowhere
riding storied lines like the California Zephyr or the Orient Express.
But when trains were first introduced, they were the great
technological disrupter of their time.

The same is true for the slam-dunk. Basketball’s miraculously athletic
and spectacularly soaring shot might be today’s crowd-pleaser,
attracting 7 million TV viewers to the most recent NBA slam dunk
contest, but decades ago back when the dunk was a revolutionary
innovation, it was vilified by almost everyone. In 1935 a disapproving
college coach tried to block the shot with his vitriolic essay,
“Dunking Isn’t Basketball.” A Boston Celtic from the 1960s, Satch
Sanders, described how players who were anti-dunk tried “take people
out of games,” punishing those who dared to dunk by slamming into them
while they were still soaring toward the hoop. Dozens of changes were
made to the game to discourage the dunk. In 1967, the NCAA rule-makers
even banned the shot, believing that one player’s mastery of the
dunk—Lew Alcindor’s (aka Kareem Abdul Jabbar)—was destroying the game.
Dunking was its own kind of wormhole, a revolutionary way of getting
the ball from point A to Point B that favored the big men and slighted
the smaller passers and shooters. Eventually, the once-feared dunk was
no longer seen as a game destroyer but as one of basketball’s most
creative innovations. But there was one rule that was instituted by
the NBA in the 1979-80 season to make it a little easier for the small
guys to shoot and a little harder for the big men to dominate. It’s
taken a while for the rule to have its desired effect. It’s called (if
you haven’t guessed already) the 3-point goal.

Innovators master the art and science of moving things from point A to
point B. We benefit from their innovations even though we desperately
miss what’s been destroyed. One of the best hacks for dealing with the
“future shock” of breakneck technological innovation comes from
BoingBoing founder Mark Frauenfelder, who straddles two worlds. On the
one hand, Mark Frauenfelder is a technophile. He started out as an
engineer and was so in love with technology that he wanted to write
about it, so in 1995 he pioneered one of the web’s first blogs, where
he still journals about the creative potential of tech innovation. But
Mark Frauenfelder is also one of the biggest boosters of the
old-school, hand-crafting, DIY maker movement. “Once in while I get
sick of the echo chamber of the web and being on the computer,” he
told us while reporting our book The Art of Doing. “And that’s when I’ll pull out my paints and do some artwork
or go out and do something with my kids, like fly a kite.” In other
words, sometimes you just want to get from point A to point B the
old-fashioned way, with your feet, whiling away the time, meeting
people, smelling the roses and experiencing the welcome happenstance
of life.

Camille Sweeney (@_CamilleSweeney) and Josh Gosfield are the authors of The Art of Doing:
How Superachievers Do What They Do and How They Do It So Well. 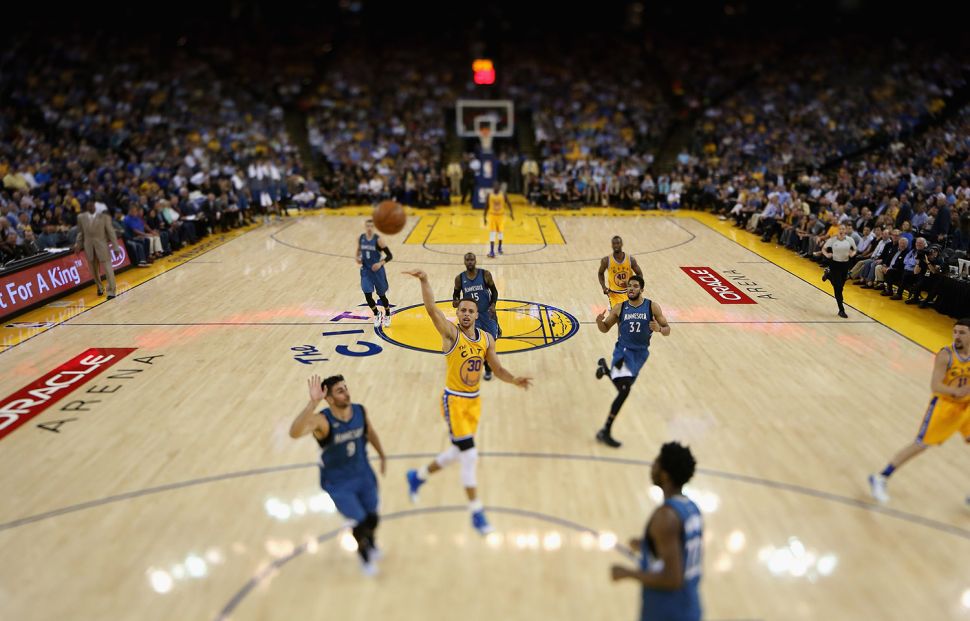