“You get what you settle for,” Susan Sarandon’s Louise tells Geena Davis’ Thelma in the iconic film Thelma & Louise. The two women are out for a weekend getaway.  Along the way they dance, flirt, drink, look tough, get dirty, and attempt to be the kind of free-spirited women they might have been if circumstances hadn’t so pinned them down.  In other words, they do what men have long done when taking to the road. They assess their lives and decide that they’re no longer willing to settle.

“Something’s crossed over in me and I can’t go back,” Thelma admits upon realizing she’s married to a bully who treats her like a child. “I mean, I just couldn’t live.”

Though their plans spin out of control when Louise kills the man who attempts to rape Thelma, setting them up as fugitives, the real essence of the movie, the part that captured the hearts and minds of the nation, is the female road trip.

Thelma & Louise will turn 25 in May but it is as fresh and relevant today as in 1991 when it took the film world by storm, receiving six Oscar nominations, an Academy Award for Best Original Screenplay (for first-time female screenwriter, Callie Khouri), and grossing some $45 million since its release.  The movie is a touchstone: the quintessential, female-centered road trip.

Its powerful story of feminine metamorphosis via the road, alas, remains as rare as it was successful.

Thelma and Louise’s road trip experience gives the women a glimpse of life beyond what is familiar. That new, grander perspective of what they can hope for transforms them. By the end, they’re ready to be fully awake and engaged in their lives, even if that means the end of all they’ve known.

Men have taken to the highway to find themselves, whether in books, films, or simply in real life ever since Homer’s Odysseus set sail around 700 BCE. But road trips, as presented in American films and literature, are basically a masculine endeavor.  There is no female Huck Finn, nor even Sal Paradise and Dean Moriarty (characters from Jack Kerouac’s On The Road). Film incarnations include Sideways, Rain Man, Easy Rider, Road Warrior, The Motorcycle Diaries, Dumb and Dumber, Mad Max — even The Adventures of Priscilla, Queen of the Desert about two drag queens and a transsexual –  all remain decidedly male focused. (Google “road trip films,” and “buddy films” will pop up immediately.)

The archetypal stories that drive us as a species – the hero’s journey and its many incarnations – either leave women out of the picture or ask us to mold our adventures onto a male prototype. Or worse, scare us into inaction with their warnings of failure and violence. Male-driven stories subconsciously limit the options women think we can explore.

Think about it: try to name a book or movie in which a female character embarks on a road adventure without ending up raped or dead. Thelma and Louise drive off a cliff after a rape. Women in road films are rarely driven by a pursuit of adventure; they are more likely in flight from abusive males or escaping the sins of their past.  Last year’s Wild seems to beg the difference, but even that character is endangered by men while hiking the Pacific Crest Trail, and though she escapes both rape and death, she is running from her own past and haunted by her mother’s death.

I know why I took to the road. I was stuck at midlife, thinking I knew everything about the choices I faced.  I needed to shake things up in order to see there were many more options than I initially thought.  Riding my motorcycle from Los Angeles to Milwaukee and back with a female friend gave me what I was after – – a larger frame for my life. Riding a motorcycle for hours on end, days at a time, will do that.  A road trip insists on focusing you in the moment.  More than anything, I loved the feeling of fear that thrummed in my ribcage, coupled with the sense of satisfaction I felt when that fear finally curled up and retracted its claws. Being on the road showed me I was stronger and braver than I thought I was.

But what are women like me to do when the only female road trip narrative we can name is from a film made a quarter century ago and both of its characters end up dead?  The importance of female role models who engage with adventure, take to the road, or enter the male realm, cannot be understated. Women need to know it’s possible to pursue their dreams by watching others, but it’s just as important for the larger culture to witness her exploits.

If a woman undertakes a road trip because she watched a film that encouraged her, or read a book that inspired her, great. But if the men she encounters on the road have not seen that film or read that book, they may not understand the same idea: that it’s okay and even necessary for women to pursue their aspirations and enlightenment via a journey, and that such a choice is not an invitation to abuse or danger. Countless women like me want to see the world and experience a larger life as a result of that experience,  just as much as men do.  But we hesitate for lack of a role model, lack of a storyline that provides a positive outcome, or out of fear of being ostracized or harmed.

Twenty-five years after Thelma & Louise, there are still no stories like it.  Whether in films, books, or the tales we share with each other, we need to open up the narratives that encourage women to – safely, enthusiastically, and inquisitively – take to the road where wide vistas dilate our souls.

Bernadette Murphy is the author of, Harley and Me: Embracing Risk on the Road to a More Authentic Life (May 2016, Counterpoint Press). She has published three previous books of narrative nonfiction including the bestselling Zen and the Art of Knitting, is an Associate Professor in the Creative Writing Department of Antioch University Los Angeles, and a former weekly book critic for the Los Angeles Times. Her website is BernadetteMurphy.com and you can find her on Twitter: @BernadetMurphy. 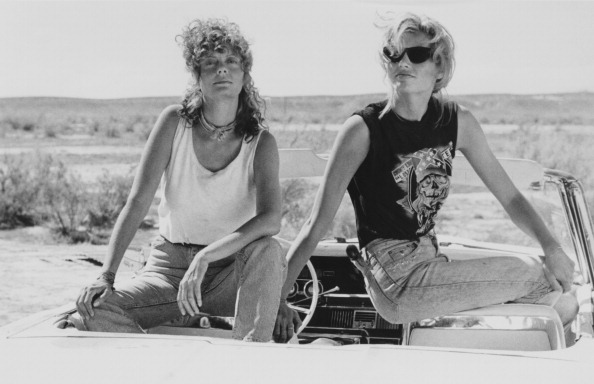