In the seven months since The Late Show with Stephen Colbert premiered on CBS, there have been nine writers on the show promoting works of fiction.

All nine of them have been men.

The question then becomes: Why? Why, in an era when women are the largest reading and book buying demographic, when female writers are getting record-breaking publishing advances and when the question of “Are women funny?” may have finally, mercifully slumped into an unmarked grave, is the role of pop-literary intellectual reserved for male writers?

It should be noted that Colbert has invited on a number of female writers: Stacy Schiff and Doris Kearns Goodwin (historians), Carrie Brownstein and Shonda Rhimes (celebrity memoirists), but he’s failed to elevate a female voice as worthy of celebrity attention in the realm of fiction. And tomorrow, B.J. Novak will be on the program, and though presumably he’ll be promoting li.st, he’s become something of the poster boy for celebrity-turned writer who’s been allowed every platform available to him to give his fiction gravitas (Mr. Novak appeared on The Late Show in 2014, when David Letterman was hosting, to promote his book of short stories).

A man will write an incisive novel about a marriage that will be lauded and widely reviewed; A woman writes a book about marriage and its cover becomes a sun-drenched field with a frolicking woman in a cotton dress, destined to grace the stands of Hudson News’ in airports around the country.

It seems female writers are more palatable when they’re comfortably confined to certain realms of the publishing world. As Meg Wolitzer wrote for The New York Times Book Review back in 2012: “Sure, Hilary Mantel’s ‘Wolf Hall’ is pretty massive, but I suspect that a historical work—one that teaches the reader about a subject (in this case a male one)—is considered more acceptable from a woman than, say, the kind of long ‘sensibility’ novel written more frequently by men.” It seems that four years later, women writing about history or themselves is still more palatable than a woman who can craft prose purely from her imagination.

Wolitzer goes on to discuss the way marketing divides male and female writers: A man will write an incisive novel about a marriage that will be lauded and widely reviewed; A woman writes a book about marriage and its cover becomes a sun-drenched field with a frolicking woman in a cotton dress, destined to grace the stands of Hudson News’ in airports around the country.

On The Late Show, Stephen King, John Irving, and George Saunders were invited to participate in a segment in addition to their interview in which they read Stephen a bedtime story (the host wearing makeshift pajamas over his suit and a triangular sleeping cap.) The allegorical fairy tales were mildly funny, but the joke was in the image: an esteemed author reading something unliterary. By mocking their literary seriousness, the segment reinforces it, reminding the CBS audience that these are the Authors that should be known in the mainstream.

I was in the first intern class at Colbert’s Late Show and I noticed the distinct trend of men coming on the show to promote novels and women coming on the show to promote memoirs. Towards the end of my run, I emailed the booker, asking about the inequality. I provided a long list of female writers that I would have loved to see interviewed. The email back was quick and curse. “Thank you for the list. I am familiar with all of them. Usually, writers are promoting a book when they come in our show.” It seems I had made the mistake of forgetting no women had come out with a book in the previous six months.

It seems I had made the mistake of forgetting no women had come out with a book in the previous six months.

It’s easy to blame The Late Show’s 0/9 streak as an unfortunate reflection of the literary community as a whole. After all, the show relies on booking celebrities and it’s not Stephen Colbert’s fault if more people have heard of George Saunders than Lauren Groff (whose Fates And Furies President Obama called his favorite book of the year.)  And how could Stephen Colbert be expected to want to interview a nobody like Margaret Atwood or Judy Blume or Toni Morrison or Miranda July, all of whom had new works of fiction in 2015?

The challenge for female writers to be taken seriously when they’re so often relegated to the realm of “chick-lit” (not to mention the atrociously condescending attitude implied by assigning books the name “chick-lit” in the first place) has been well-documented elsewhere. Jennifer Weiner has been a titan of defending the merit in works that the literary establishment delights in ignoring, and last August, a Jezebel essay relayed the surprising reversal of fortune when the writer began sending her manuscript to agents under a male pseudonym. Colbert’s selection of which authors tacitly stamps bestselling female Young Adult and thriller writers like Cassandra Clare, Rainbow Rowell, Veronica Roth, Gillian Flynn, and Suzanne Collins as unworthy of network attention.

Before the show’s premiere, Colbert wrote a piece for Glamour magazine with the headline: “Stephen Colbert Shares Why He Thinks Women Should Be in Charge of Everything.” In the essay, he emphasizes his commitment to women: “Point is, I’m here for you, and that means I’m going to do my best to create a Late Show that not only appeals to women but also celebrates their voices.” That proclamation caused a few clenched jaws a few weeks later when it was revealed that his writing staff was comprised of 17 men and two women.

When Stephen Colbert went out of his way to declare that The Late Show would be different in its commitment to women in the notoriously male landscape of late night, it stings even harder to see him use his platform to promote literature in the laziest way possible: interviewing Serious Literary Novelists that look exactly like most people assume Serious Literary Novelists have always looked.

A publicist representing The Late Show declined to comment. 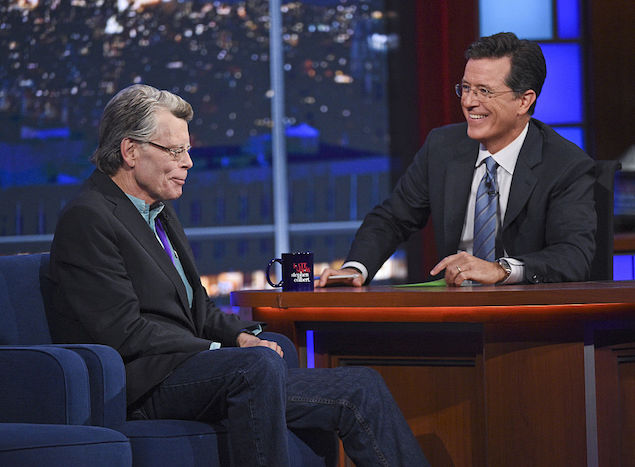