The Republican Party likes to present itself as the party of free enterprise. One of the enormous benefits of a free market is that it allows for experimentation in finding solutions to personal and social needs. If a man invents a better mousetrap, everyone benefits while he grows wealthier for it. If he has a bad idea, the costs are his alone to bear. This is the precise opposite of government bureaucracy, where the costs are borne by the taxpayers and the benefits transferred to corporations via lobbying.

Given that, one would think that the GOP would look at the actual data to see what strategy works and what doesn’t. Yet that isn’t the case in practice. Take the issue of reigning in spending, supposedly a defining issue for any Republican. In the last 35 years, the only times budgetary concessions have been wrested from the left were via utter Republican intransigence (namely, the Gingrich Federal government shutdown and the debt-ceiling crisis of 2011). Does that mean that obstinacy always works? Of course not. But it does mean that obstinacy is the only thing that has worked. Similarly, there is an insistence that it’s easier to elect moderates as President than those from the right. Though this might make logical sense, the data says otherwise. Despite the headlines, Dewey never did defeat Truman. In fact, unless you count George H. W. Bush, who was Vice President, no Republican moderate has been elected President since 1972—and Nixon was hardly regarded as some sort of a proto-Romney.

In practice, democracy acts like the market in many ways. A brand must have some competitive advantage over its rivals, some way to distinguish itself. RC Cola competes with Coke on the basis of price. Apple competes with PCs in terms of functionality and a cult atmosphere. It’s all well and good for the Republican party to agree with progressives on social posturing.

But in terms of winning votes, the GOP will never be able to out-left the left. What the old white men at the RNC regard as diversity, even marginally-intelligent voters see as transparent tokenism. Can anyone say with a straight face that Clarence Thomas—with a total of nineteen months as a judge—was anything other than an affirmative-action hire? When President Bush called him the “best qualified,” this could only have been true if the criterion were melanin. It was offering an explicit choice to the electorate via the Contract with America that finally allowed Republicans to take Congress after 40 years.

This was the analysis Phyllis Schlafly brought to national politics. In 1964, Ms. Schlafly penned A Choice Not An Echo, arguing for the nomination of hard-right Senator Barry Goldwater for president. Pictured on the cover wearing pearl earrings and a necklace, boasting a proud Republican smile, she analyzed every presidential election from 1936 onward. Ms. Schlafly argued that the one recurrent theme was of the establishment completely disregarding the GOP base, offering up loser after loser while preaching a “Me too” philosophy. Those interim years saw a massive growth of the federal government and huge American setbacks internationally. In the political arena, conservatism saw few if any legislative victories. “Who’s looney now?” demands the title to chapter two.

Ms. Schlafly got her wish that year. Mr. Goldwater was the Republican nominee—and led the party to the worst electoral defeat in American history. Yet it seems undeniable that the GOP needed to suffer short-term losses in aid of long-term success, for the Goldwater campaign marked the clear beginning of the contemporary Right. Back then, journalist Bob Novak was referring in print to Young Republicans as “well-scrubbed young monsters.” By the time Mr. Novak wrote his memoirs in 2007, he had come around so far to the Goldwater worldview that he entitled his autography The Prince of Darkness. Mr. Novak was hardly alone. No one disputes that it was the Goldwater disaster that made the 1980 Reagan Revolution possible.

The Democrats understand this approach very well. Dozens of Democratic congressmen defied the literal screams of their constituency to pass Obamacare. They lost their seats that November—but the progressive goal of universal health care grew inexorably closer. Principles and a long-term agenda are far more important than temporary political victories. In 2000, President Bush won office with a Republican congress, the first such occurrence since Eisenhower. Government spending—again, the alleged defining characteristic of Republicanism—did not decrease by one cent. The biggest accomplishment of that era was war in the Middle East: very much a bipartisan affair.

Yet Ms. Schlafly wasn’t done yet. The 1970s were heady years for feminism. Strong, handsome Congresswomen like Bella Abzug, Liz Holtzman and Shirley Chisholm were the faces of the new politics, and the Equal Rights Amendment was the next great feminist goal. It was not only desirable but downright inevitable. Morally, it was “the right thing to do.” Politically, it was a no-brainer. What politician in his right mind would oppose gender equality, alienating over half the population? There was good reason both political parties had explicitly endorsed it in their respective platforms since the 1940s.

But there was also good reason why the ERA might not have been the wisest of legal moves. Rather than waiting for the Republican establishment to do something, Ms. Schlafly launched a one-woman crusade against the amendment. It’s easy to imagine what sort of phone calls she got, party elites mansplaining how her far-right antics were hurting the party. We must be reasonable, after all, and put Republican victory over any “crazy” principle. “Everyone” knows that politics is about compromise. That’s how to win. Or is it?

Ms. Schlafly trolled her opponents right from the start, beginning her speeches with “I’d like to thank my husband for letting me be here tonight.” She would point out that intentionality does not bind the law. Legally speaking, an Equal Rights Amendment would necessarily mean women would be just as subject to a draft as men. They would be just as common in combat. A lack of gender equality in a company would be taken as ipso facto proof of discrimination. Divorce and custody would be changed inevitably, and gay marriage would be a given.

Ms. Schlafly won. At its peak, the ERA received 35 of the necessary 38 state ratifications to become part of the Constitution. After Ms. Schlafly’s campaign, five states rescinded their ratification—a phenomenon largely without precedent. This was arguably the first major defeat feminism faced in America, and certainly was the biggest. By 1984 Geraldine Ferraro—the first female candidate on a national ticket—was advocating that support for the ERA be dropped from the Democratic Party platform. None of this was done thanks to the Republican establishment, but despite them.

The times have certainly changed since 1964. Both parties have far more data to parse in terms of strategy. Yet the colloquial “definition of insanity” is repeating the same action and expecting a different outcome. As a result of her support for Donald Trump, Ms. Schlafly is on the verge of being kicked out of her Eagle Forum organization at the age of 91. So really: who’s looney now? Is it Ms. Schlafly—or is it the conservative establishment? 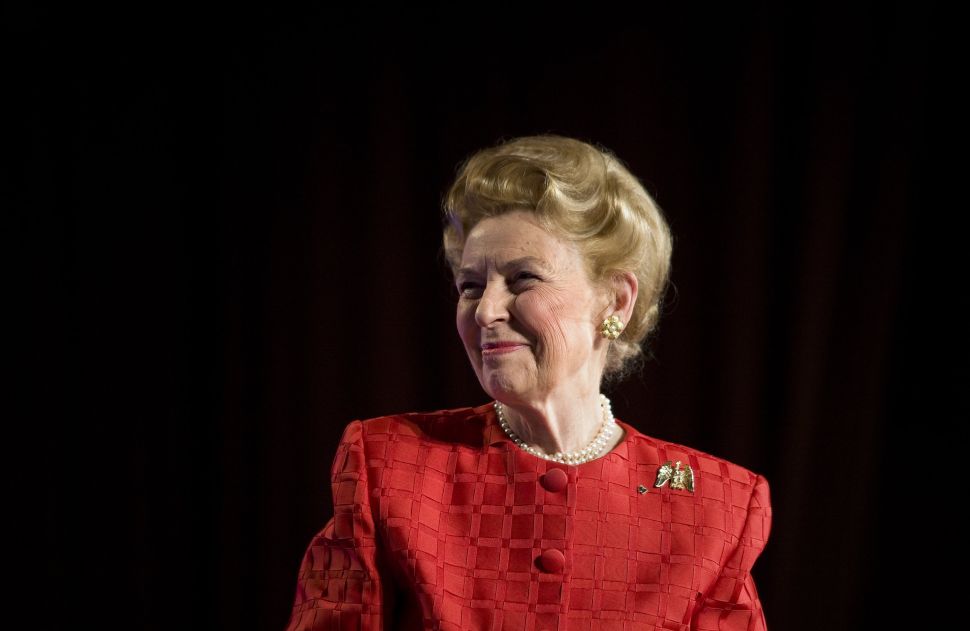