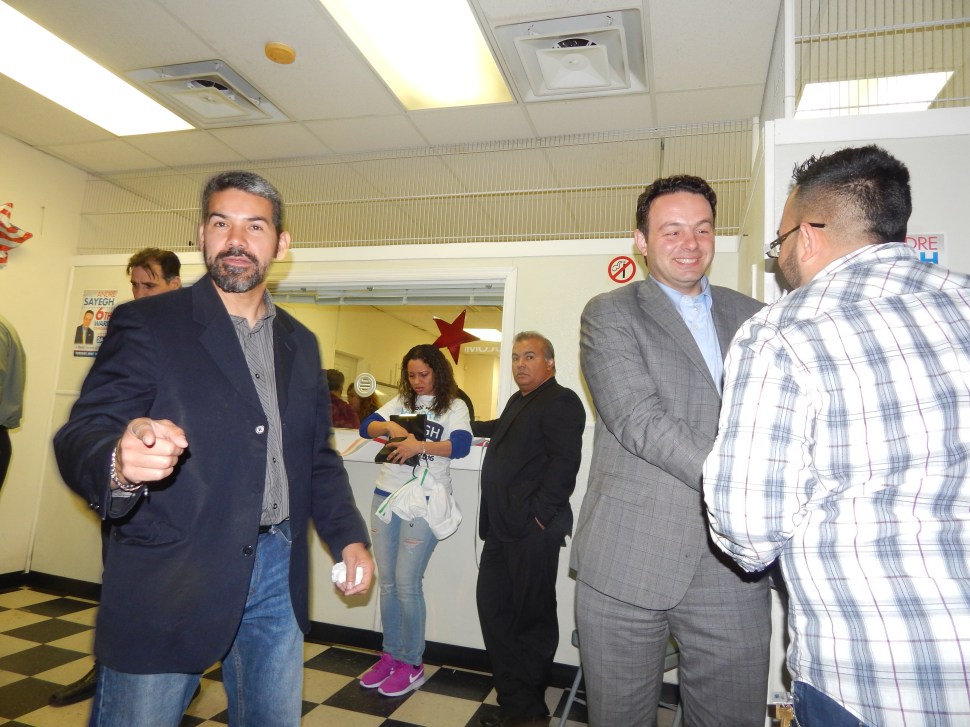 It finally looked like Valhalla time for the 6th Ward Councilman. When you talked to him early Tuesday, you could almost hear the crackling fire of the prepared political funeral pyre. Certainly a number of people close to the candidate believed he would lose on Tuesday. But Sayegh climbed off the canvas around midday and went on one last blistering door knocking charge, very nearly literally collaring voters and personally marching them to the polling places. Against a tough challenger in the person of teacher/coach Al Abdelaziz, who had Mayor Jose “Joey” Torres behind him, Sayegh on Tuesday displayed why he is one of the state’s best local retail politicians. Even his rivals on Wednesday morning gloomily acknowledged his skills. Worth mentioning too were members of his political team: including Brendan Gill, Dave Parano and Javier Fernandez. We have to say a special word about Foxhole Fernandez (pictured above, left, with the candidate on Election Night), who’s been a loyal and effective ally of Sayegh’s for years.

The powerful Ocean County Republican chairman got behind the effort to reelect Ginny Haines as national Republican committeewoman, and helped Haines short circuit a stuff early challenge by Darlene Shotmeyer of Bergen County. Republicans this week reaffirmed both Bill Palatucci and Haines to serve on the national committee.

Once bitterly divided, the Edison Democratic Party Chairman and Mayor of Edison now look mutually muscled up,  having both gotten behind Robert Karabinchak as the establishment choice for the LD18 Assembly seat (see below). The result is that Hahn and Lankey strengthened themselves in their respective rival camps, the former ahead of reorganization next month and the latter ahead of next year’s mayor’s election.

Hillary for New Jersey made the right move when it tapped the veteran operative for the role of political director. Matos goes back to the McGreevey era, when she helped the then-Woodbridge Mayor get elected governor. She later worked in the McGreevey, Codey and Corzine administrations and currently serves as general manager for Team Kivvit’s New Jersey office.

Where’s the next progressive barricade? The fierce, don’t-mess-with-me President of the Friends of Liberty State Park rejoiced this week after the Christie administration’s announcement that it will abort plans to entice large-scale private development to the Jersey City gemstone. The news ending a nearly two-year effort, opposed at every turn by Pesin and his allies.

Left for dead five years ago following a hit and run accident, the son of Communications Workers of America (CWA) Leader Lionel Leach this week graduated with a degree in government from Franklin & Marshall College in Pennsylvania.

The Edison Councilman this week received the support of the Middlesex County Democratic Committee to assume the LD18 Assembly seat vacated by Senator Pat Diegnan.

According to CNN, Jenny Kramer, an attorney for Chadbourne & Parke law firm, yesterday “wrote a letter to New Jersey federal judge Susan D. Wigenton, on behalf of her client ‘John Doe’ late Thursday evening claiming releasing his name will make him branded a ‘felon without due process of the law, causing him immediate and irreparable harm.'” That unknown person received some breathing room ahead of the new Tuesday deadline.

The impassioned CEO of Newark’s North Ward Center honored the families of autistic children at her heavily attended Night of Hope event at the center this week. At the event, Adubato also paid tribute to Senate President Steve Sweeney (D-3), without whom, she said, there would be no Newark Center for Autism. The big tent happening signaled Adubato’s intent to be a political player, in the vein of her legendary father, North Ward Center Founder Steve Adubato, Sr.

Although he didn’t scrub the decks entirely and must bear the continued fingernails-on-the-chalkboard presence of his dreaded foe, Ward Six Councilman Andre Sayegh, the mayor of Paterson did back Mike Jackson and Luis Velez, both of whom won on Tuesday night. Those wins – including Velez’s supplanting Torres antagonist Julio Tavarez – give the mayor more clout on  the council. That helps minimize the mischief-minded Sayegh. But Torres must also now fret and sweat Sayegh’s presence in elected office. On the way out of the candidate’s HQ Tuesday night, PolitickerNJ overheard Sayegh say he is going for Torres in 2018.

You get the sense that Torres’s aide-de-camp would sooner pass over a shot at being president of Peru than a chance to operate in Paterson’s six wards. He had some success Tuesday night, specifically in Ward 5, where Torres forces won back a seat they haven’t owned since 2008. But Rodriguez also took it on the chin in Ward 6 with Abdelaziz’s loss.

He lost. But if Sayegh runs for mayor and wins (a heavy lift, granted, given the demographic realties of Paterson and the fact that Sayegh took a strong shot in 2014 and came up substantially short), look for the teacher-coach to take another run at the 6th Ward council seat. He turned heads in his loss and helped produce the more exciting campaign match-up so far this year in New Jersey.

The guy keeps shaking hands behind the scenes and ending up standing in the winners’ circles like the cat that swallowed the canary. He stepped aside in the race for Edison Democratic Party chairman and backed winner Keith Hahn. Then he floated himself as a candidate in LD18 before sidestepping a head-on collision with Robert Karabinchak and backing his council colleague. Diehl, in fact, introduced Karabinchak at last night’s LD18 special convention. What is his endgame? More pointedly, what is Diehl’s deal?

What a great guy. He was the top vote-getter in 2014 and remains a significant threat to Torres’s rein. You’d have to call him the front-running challenger to Torres based on sheer city demographics. But he got behind at least two candidates on Tuesday who lost, including promising newcomer Wendy Guzman in Ward 5. All it proves is that the likeable at-large councilman has some work to do ahead of a possible 2018 challenge to the sitting mayor. Look for the Sayegh-Mendez rivalry to deepen over the next two years as the councilmen battle for the battle position to take on the king.

The Senate Majority Leader, a fighter by nature, put up a combative slate of candidates in her hometown of Teaneck that got washed off the field on Tuesday.

The former chair of the Edison Democratic Party could not get back in the mix in a significant way and now finds himself alienated from the establishment. Russomano didn’t want Karabinchak as the organization’s LD18 assembly pick and said so, and was basically ignored.

He put up a good effort, the councilman, but ultimately fell short of his goal of displacing incumbent Orange Mayor Dwayne D. Warren. The final tally was Warren, 1,921 votes; Janice L. Morrell, 664 votes; and Coley, 1,256 votes.

The challenger to Montclair Councilman Sean Spiller went down in flames on Tuesday night.

It’s too bad, because we liked the name. It looks good on a lawn sign. But having entered a guilty plea to charges of assault by auto (4th degree) and theft by deception (3rd degree), the embattled Jersey City councilman finally put an end to his own public misery yesterday when he announced that he would be stepping down from his position on the Jersey City Council to focus on his case(s).

Assane Faye
The founder of the United Security and Police Officers of America (USPOA) was convicted of all counts of an indictment charging him with two counts of embezzling union funds and seven counts of mail fraud arising from unemployment insurance fraud. Faye was convicted following a three-week trial before U.S. District Judge Peter G. Sheridan in Trenton federal court. The jury deliberated for five hours before returning the guilty verdict. 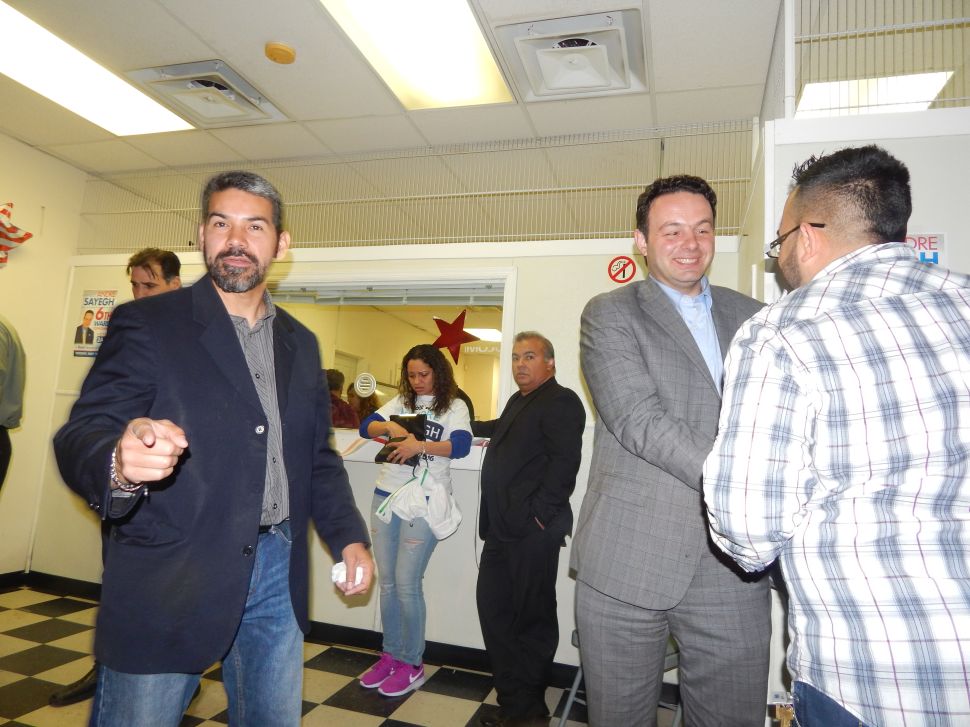