Benefit: “Residency Unlimited Annual Benefit 2016” at Richard Taittinger Gallery
Although tickets to this dinner, which will benefit the wide-reaching residency organization Residency Unlimited, are sold out, you can still donate by purchasing an artwork by one of thirteen international RU artists for only $500. And artists: you can donate by purchasing a raffle ticket for $25 ($20 for two or more) which will give you the chance to win a funded two month RU residency in Taipei—even if you suck at art! Seems like a great way to help an organization that does a lot for artists around the world.
Richard Taittinger Gallery, 154 Ludlow Street, New York, 6:30 p.m.

Opening: “Martha Rosler: If You Can’t Afford to Live Here, Mo-o-ove!!” at Mitchell-Innes & Nash
Martha Rosler is back with an exhibition hosted by The Temporary Office of Urban Disturbances (an “autonomous group” of unnamed artists. Well, we assume they are artists, this being a gallery). This show expands upon the Rosler’s three-show cycle entitled If You Lived Here…, which was first shown at the Dia Art Foundation in 1989 and focused on problematic issues centered around life in the big city. Rosler’s new exhibition, also presented in three parts, will offer more of the same but will include public panels and discussions on the precarious nature of trying to exist in New York City. Discussions at the show will center on the third and final part of the show’s focus: City: Visions and Revisions, which addresses urbanism and development. Talks will take place throughout the month of June.
Mitchell-Innes & Nash, 534 West 26th Street, New York, 6-8 p.m.

Opening: “Mal Maison” at Maccarone
This all-female show, curated by Maccarone artist liaison Ashton Cooper, concentrates on “abstraction-oriented” artists that specifically look to bust up the preconceived idea that there is a shared language with which to describe the female body. This fantastic group of artists, which includes, Rosy Keyser, Brie Ruais, Tschabalala Self, Becky Kolsrud and more, all use abstraction as a tool to dissipate or camouflage the body in ways that redirect the usual thoughts surrounding women’s bodies, and in fact, women artists themselves. A must see.
Maccarone, 98 Morton Street, New York, 6-8 p.m.

Opening: “For Freedoms” at Jack Shainman Gallery
Here’s something different: the headquarters of an artist-run super PAC as an exhibition. Co-founded by artists Hank Willis Thomas and Eric Gottesman, the super PAC “For Freedoms” will bring focus onto the funding of political campaigns in this country, and how it has shaped the 2016 presidential race. On top of that, this group of participating artists—which includes Nina Chanel Abney, Matthew Day Jackson, Rashid Johnson, Marilyn Minter, Trevor Paglen, Dread Scott and many others—hope to question the notion of “freedom” as it pertains to both art and politics. A timely event for these absurdist times.
Jack Shainman Gallery, 534 West 24th Street, New York, 6-8 p.m.

Opening: “Martin Creed: The Back Door” at The Park Avenue Armory
An artist of minimalist engagements, Martin Creed will fill the Park Avenue Armory with a new grouping of his hard-to-define artworks. The 2001 Turner Prize winner, known for enlivening traditional structures with a light touch of deadpan wit, will present (among other works): opening and closing doors, a slamming piano and a large grouping of balloons. Aside from the opening, there are “family program” dates where you and the tykes can learn about Creed and make your own attention-grabbing spectacles (then again, you might not want to encourage that).
The Park Avenue Armory, 643 Park Avenue, New York, 2-7 p.m. Tickets: $15

Opening: “Minerva” at Cuevas Tilleard Projects
Why tap radio hosts to curate an art show? If those radio hosts are the Minerva Cult—Know Wave Radio’s four art curators/gallerists/art specialists Fabiola Alondra, Erin Goldberger, Anna Furney and Jane Harmon—then why wouldn’t you? For this show, each Minerva Cult member asked a different “art world icon” to recommend an artist to them (proving the Minerva women have excellent delegation skills.) Those icons came up with some pretty great artists: Andrea Belag, Lucy Mink-Covello, Kurt Kauper and Sally Saul. And together they should make for a nice mix of super skilled yet under recognized practitioners.
Cuevas Tilleard Projects, 142 Henry Street, New York, 6-9 p.m.

Opening: “Anna Sew Hoy: Invisible Tattoo” at Koenig & Clinton
This L.A.-based sculptor, who always seems to be reinventing her shapeshifting practice, brings her composite sculptures—which incorporate clay, denim, cinder block, stone, steel rings, earbuds, and other found or manipulated materials—to New York City for the first time in six years. Sew Hoy’s work references the body not only through her physical manipulation of traditional art materials like clay, but also through the familiar garments and styles that echo our deep wishes and desires. Furthering the spirit of experimental utility in her works, her figure-sized works will become the setting for a performance and reading by fellow artists Dawn Kasper and Laurie Weeks later on in the exhibition.
Koenig & Clinton, 459 West 19th Street, New York, 6-8 p.m.

Talk: “Eric Fischl in conversation with Rachel Corbett” at Skarstedt
Eric Fischl, a painter that needs no introduction, will be sitting down with Rachel Corbett, the new executive editor of Modern Painters magazine, to discuss his new show of grotesque art fair images titled “Rift Raft.” The show, his first in New York after parting ways with his longtime dealer Mary Boone, uses “the art fairs as a lens” onto the base and guttural appetites of humanity, while also capturing a bevy of recognizable art world archetypes, including the frenzied buyer, the aloof seller and the eccentric, attention-craving moron. Topics are likely to include problematic art venues (like art fairs), Fischl’s rise to prominence in the orgiastic ’80s and possibly even his Jerk friend and #1 fan, Steve Martin.
Skarstedt, 20 East 79th Street, New York, 6:30 p.m.

Opening: “George Henry Longly: We All Love Your Life” at Red Bull Studios New York
This is, unbelievably, the first U.S. solo show for this wacky British artist who continues to be a hot topic thanks to his cheeky sculptures, wall works, videos, performances and even forays into music. For this show at the cavernous Red Bull Studios in Chelsea, Longly will reinvent the space as a series of hi-tech experiences. Inspired by the 1976 Henry S.F. Cooper, Jr. book A House in Space, about the Skylab space station, Longly sought to create experiences much like the first space walks with his immersive filmic and sculptural environments. Should be pretty wild.
Red Bull Studios, 220 18th Street, New York, 6-9 p.m.

Opening: “Mary Mattingly’s WetLand” at the Parrish Art Museum
In conjunction with the exhibition “Radical Seafaring” now up at the Parrish Museum in Mill, Long Island, artist Mary Mattingly will bring her sustainable houseboat-as-artwork to Long Wharf in Sag Harbor. Once there, Mattingly will show visitors how to eliminate their carbon footprint via some simple steps, including rain collection and purification, solar power, vegetable gardening, something called “upcycling,” and more. These are all things we’ll need to know once the spit hits the fan, people, so maybe go check it out. Remember: you need to reserve a tour spot so you can board WetLand, and don’t forget to ask the artist about Swale—her “floating forest” that’s coming to New York City waterways later this month.
Parrish Art Museum, 279 Montauk Highway, Long Island, 10 a.m.-5 p.m. 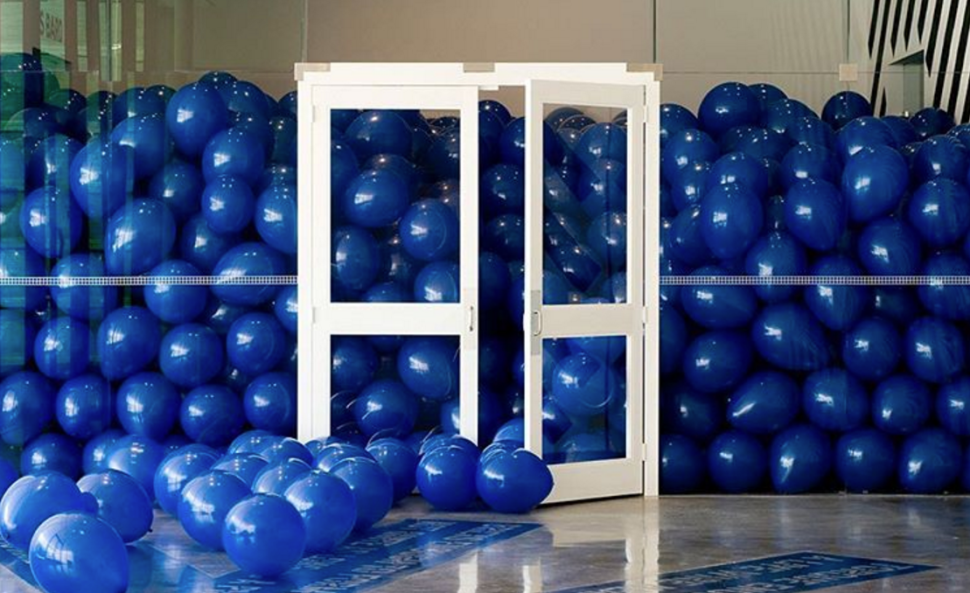