In the spring of 1966, Bruce Johnston of the Beach Boys flew over to London. An acetate of the yet-to-be-released Pet Sounds was tucked securely under his arm. Like a high-ranking diplomat on a crucial mission, he had one and only one urgent assignment: to play the pioneering LP for John Lennon and Paul McCartney of the Beatles.

When they heard it, Lennon and McCartney immediately understood that a new standard had been set for album-length pop music.

But just as significantly, they also grasped the conceptual core of the album: The Beach Boys’ master composer and artistic strategist, Brian Wilson, had created a work that lovingly integrated a century of American pop, vaudeville, classical and folk tics into a user-friendly avant-psychedelic landscape. Even more remarkably, this modernist valentine to the past never seemed pretentious, not even for one moment.

Lennon and McCartney also understood that Brian Wilson had the courage to make music that reflected the cultural DNA inside every American musician, even citing the genes that had been discarded as unhip or archaic.

Within hours, Lennon and McCartney decided to attempt to do something very similar.

They would make a state-of-the-art pop album that puffed with the acid-breath of the High ’60s while sourcing the Fabs’ unique cultural vernacular: the music halls, pub sing-alongs, ratty rained-on circuses and shabby Pier entertainments of the north of England.

Although it is fascinating to listen to all of the Beatles mono releases, “Sgt. Pepper’s Lonely Hearts Club Band” is the only instance in the Beatles’ catalog where it’s absolutely essential to do so.

Conceptually, Sgt. Pepper’s completely emulated Pet Sounds, without sounding anything remotely like it.

The “real” meaning of Sgt. Pepper’s (which just celebrated it’s 49th anniversary) is revealed in the tension that exists at the fracture where the warmth of the past meets the anxiety of the future, the distortion that occurs when old memories are altered by modern neuroses—and this meaning is only fully apparent in the mono mix of the album.

Listen, I have studied the Beatles intently since before I was Bar Mitzvah’d, and until I listened to the mono version, I had always heard Sgt. Pepper’s as a wondrous and groundbreaking pile of candy, color and pearly lysergic dewdrops. But in mono, Sgt. Pepper’s Lonely Hearts Club Band is a tough, tight and almost bitter album that is far more of a “rock” record than the stereo version I grew up with.

The mono Sgt. Pepper’s sounds like a cynical, often aggressive burlesque of the dawning Age of Aquarius, instead of a heraldic celebration of it.

Before we get too far into this, a little bit of important context. Throughout the 1960s, most major American and British rock and pop acts would release their albums in both stereo and mono versions. The FM rock radio revolution had yet to occur, so most people still heard their pop and rock in sibilant AM mono, or on tiny, single-speaker phonographs. Despite the fact that most of you reading this grew up aware only of the stereo versions of your favorite 1960s records, at the time of their initial release, the mono LPs were very prevalent.

Next: Please recall that circa 1966, automated mixing boards were a long, long way away from being invented (an automated board, much like today’s computer-driven recording and mixing systems, could reproduce an existing mix at the touch of a button). Back in Sgt. Pepper’s era, each mix was done by hand, and therefore every mix would be idiosyncratic. A mono mix might wildly differ from a stereo mix; sometimes these changes were intentional, shaped to maximize the difference between mono and stereo, and other times, the discrepancy was just a factor of human imperfection.

Detailing these variations (not just with the Beatles, but with all contemporary pop and rock acts) is fascinating stuff, but wholly unnecessary here.[i] In many cases, these mono mixes were the primary versions, the ones the artist and their producers intended to be the definitive version.[ii]

In mono, “Sgt. Pepper’s” is a tough, tight, almost bitter album that is far more of a “rock” record than the stereo version I grew up with.

Although it is fascinating to listen to all of the Beatles mono releases, Sgt. Pepper’s Lonely Hearts Club Band is the only instance in the Beatles’ catalog where it’s absolutely essential to do so.[iii]

In mono, Sgt. Peppers’ sounds like an urgent, anxious and sometimes alarming statement; it’s not the over-large bouquet of sickeningly sweet aromatic flowers it appears to be in stereo. Rather then seeming like a fanciful, welcoming LSD dreamscape, the mono version comes across as an almost cynical reflection of its time. The mono Sgt. Pepper’s often sounds skeptical, mocking and it’s altogether more thoroughly rocking.

In fact, I had never thought of Sgt. Pepper’s as one of the Beatles’ “rock” albums until I listened to the mono version.

The “sound” of the album and it’s individual components is also extremely different, and therefore impacts the listener in an entirely different way: The drums sound fat, flat and phased; the bass is high in the mix without the burping, apocalyptic dominance it has on the stereo version; and both the guitars and John Lennon’s lead vocals are far harsher, a factor that almost singlehandedly eradicates the strawberry frosting we usually find slathered all over Pepper’s.

If the overall mono soundscape is markedly different, there are plenty of song-to-song variances, too, which serve to re-define the whole piece.

The whacking guitar riff that opens “Getting Better” sounds harsh, metallic, almost Jam-ish, and therefore casts the rest of the song in an entirely new light; instead of sounding like an ad for candy tampons, “Getting Better” now sounds like something off of All Mod Cons.

On “Being For the Benefit of Mr. Kite!” the transition from the “carnival” polka-time section into the two-step verse now seems terrifying (and this was surely how it was meant to be). Even a soppy song like “She’s Leaving Home” is stark and text-driven in mono, bitter as opposed to bittersweet. And in the mono reckoning, the two versions of the album’s title track come across as far more acidic, frantic and foreboding than their whimsical stereo twins.

(Mind you, “When I’m 64” still sounds like aren’t-I-clever-Mummy? horse crap. Among the claustrophobic, almost clenched-fist environs of the mono Sgt. Pepper’s, it sounds like a sugary turd, a waste of space, whereas it isn’t quite as offensive in the stereo version.)

I won’t catalog all the curious individual song and mix differences between the mono and stereo Sgt. Pepper’s (there are many places on the interwebber to find those details), but the whole thing adds up to a remarkably different listening experience—far more different than might you think it would be, considering that the source material is (virtually) identical.

These differences cause us to do something we haven’t done, likely, since we were children: we hear Sgt. Pepper’s Lonely Hearts Club Band with fresh ears. The novel elements and alteration in texture alerts us and causes us to attend to the proceedings, preventing the listener from falling into the trance of memory that usually accompanies the experience of listening to a Beatles album. This is a very good thing.

Over-familiarity has made the Beatles’ once-startling oeuvre as comfortable as old sneakers and as comforting as a night-light. Sgt. Pepper’s Lonely Hearts Club Band has suffered greatly because of this over-familiarity. We’ve come to think if it as a cozy, even goofy pair of aural earmuffs. But it isn’t, and it wasn’t meant to be.

Listen to it again, but this time, listen to it in mono. It will sound like a cranky old friend loaded with attitude, not a softly grinning chum carrying flowers. Fall in love with it all over again.

Many thanks to Eric Goulden, whose autobiography A Dysfunctional Success: The Wreckless Eric Manual first alerted me to the supremacy of the mono Sgt. Pepper’s.

[i] I am not going to sidebar into discussing Duophonic or “fake stereo” releases, in which records mixed in mono were technically altered and enhanced to have a stereo image. This was a very common practice in the mid-1960s. Personally, I have advocated for the re-release of the Duophonic Beatles records because many of us first heard the band in this absurd and fascinating format.

[ii] For every Beatles release up to and including Sgt. Pepper’s it’s very likely that the mono mix is the “primary” mix, the one that most reflects the intentions of the band, producer George Martin, and engineer Geoff Emerick. After Sgt. Pepper’s, the stereo mixes become the “primary” mix. Nevertheless, a fascinating mono mix exists of The White Album, featuring many curious differences.

[iii] Actually, that’s not wholly true: Listening to any of the early Beatles albums in stereo—Please Please Me, With the Beatles, Beatles for Sale, A Hard Days Night—is an unnecessary if pleasant distraction, sort of like watching World War II in Color. 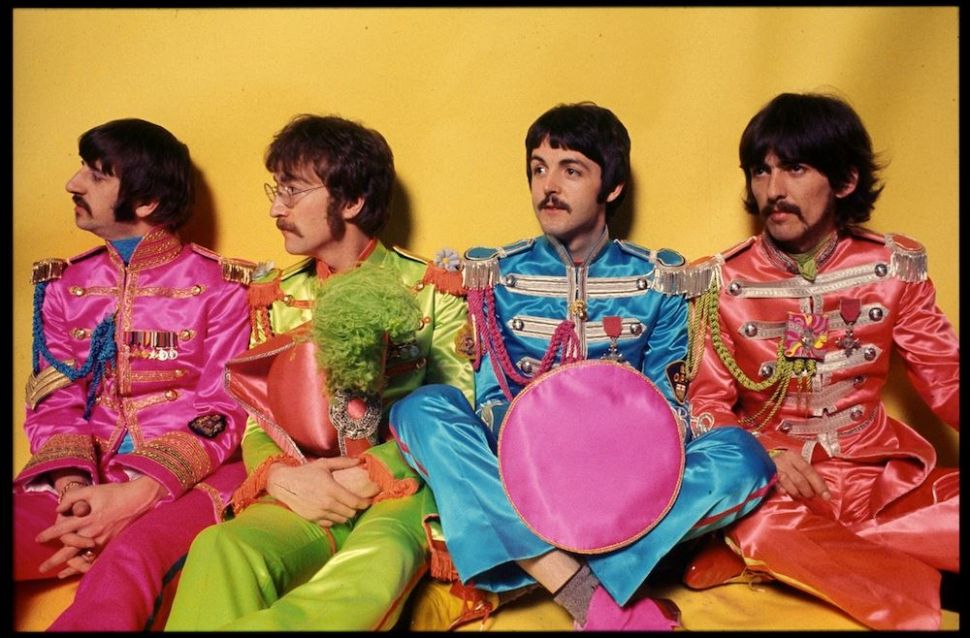