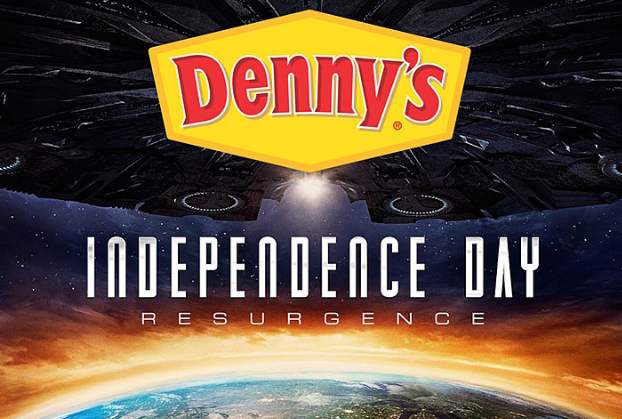 For Matt Singer, the phrase “stomach-churning” now has a whole new meaning.

Singer, a managing editor and film critic for movie review site ScreenCrush, attempted to eat every item on Denny’s new “Red, White and Bacon” menu, which the restaurant chain says is meant to celebrate the upcoming release of Independence Day: Resurgence.

What does bacon have to do with an alien invasion? Today Singer found out—and lucky for us, he documented the whole thing on social media, using the hashtag #MattEatsMovies. 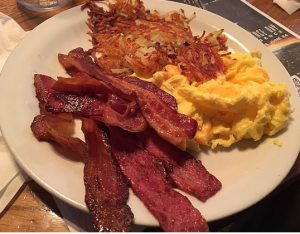 Singer was already full (and “sweating icing”) after this, but the fun was just beginning because he then Periscoped himself eating Denny’s “Triple Bacon Sampler,” which featured “more bacon than any rational person could ever want”—two strips each of honey jalapeño bacon, hickory-smoked bacon and turkey bacon, served with eggs, hash browns and toast.

Once he’d swallowed his humble pie, the critic tried to find a meaningful connection between the coronary catastrophe he’d just eaten and the summer blockbuster it was meant to promote. His answer? America.

“Bacon is as American as apple pie. Independence Day: Resurgence wants us to think it is too,” Singer wrote. “It’s not all that different than the way we all feel at the end of the summer, after the studios have shoved five months of the cinematic equivalent of bacon ice cream sundaes down our throats.”

Of course, most of Singer’s 74,000 Twitter followers didn’t care about the philosophical meaning of his quest—they just tweeted a whole bunch of sarcastic memes at him: