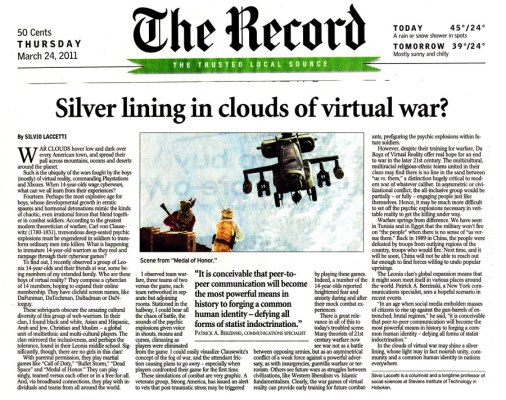 News circulating about Gannett’s devouring of the Bergen Record leaves one with a final, fatal feeling of an era at last expired.

It’s a terrible and horrendous feeling, because in the moronic wilderness of the state’s other newspapers, the Bergen Record has been that one majestic presence.

Losing the Record to a media giant is the equivalent of that scene in One Flew Over the Cuckoo’s Nest when the chief discovers that the only intellect in the building has received a lobotomy.

Gobbled up by the Internet’s particular and peculiar exigencies, newspapers have by and large gone the way of illiteracy, a process made somewhat less painful in New Jersey by the existence of the Bergen Record. It’s the last place where carefully written and constructed stories actually matter. If you go to the politics home page you recognize it at first by virtue of the fact that is not saturated by idiocy. Those monstrous headlines you find everywhere else, once envisioned as clever, subliminal seduction by some briefcase toting wiseguys, don’t exist. What you find instead is content that indulges something that now mostly eludes the industry: respect for the reader.

The stories themselves contain the oddball rationale of serving a purpose other than click bait. The bizarre value placed on citizenship informs the tone of every piece.

We’re not saying Gannett doesn’t still churn its share of good work. The Asbury Park Press does a good job of covering local issues and remains influential in Monmouth County. We also don’t yet know the details of the deal that would subsume the Record into the gears of Gannett.

But the care the Bergen Record took in reporting, manifested most convincingly in recent years by its lead work in uncovering Bridgegate, made the best case anywhere in these parts for the primacy in our civic life of independent newspapers. We pay close attention to the work of those reporters – every one of them – who works at the paper. The outfit has over the years without fail employed the best talent, and amplified those abilities with a unique formula. The columnists are especially good because their work – informed by that core value the entire operation has for thoughtful writing – contains reporting more than simply opinion. .

If Gannett chops that into pieces in the name of creating a more streamlined conveyor belt, we all know what that means.

And a dumbed down world from what we’ve got right now looks pretty dismal.