“I could mention hollywood people who come in here,” said Paul Schweitzer, owner of the Gramercy Typewriter Co. “Sometimes they’ll send over ‘their people’ looking for a prop,” he continued, a slight grin discernible under his neat white mustache. “I know it’s somebody, but I’ll be busy helping another customer. I say, ‘I’ll be with you in a minute.’ ”

Schweitzer, 77, one of the city’s last typewriter repairman, serves as a go-to source for local propmasters. One of his prized black Royals, for instance, appeared in the Broadway show Misery. A chorus of Remington Rands tap-danced in Coming Through The Rye, a new film chronicling the search for J.D. Salinger.

Holden Caulfield himself wouldn’t find anything phony at Gramercy, which expanded into the laser printer maintenance sector in the 1990s as typewriters lost market share. But business has recently picked up. “We’ve seen a resurgence in typewriters,” Schweitzer reported. “Kids who are 12 to 15 like to see words hit the paper. You should see this place at Christmas. They line up at the door with their parents.”

Four stories above Fifth Avenue, heat rises in the packed two-room shop across from the Flatiron Building. Yet Schweitzer, and his son, Jay, wear pressed dress shirts, ties and aprons. “I remember when women couldn’t wear pants in the office,” he said, minding the phone while Jay scrubbed a machine in the back.

Recently, Schweitzer learned to do “the Google” on the laptop hidden beneath a boxy 1920s L.C. Smith & Corona, lustrous as a raven’s wing. But portables steal the show, lining racks with matching cases in Technicolor hues like Cadillac pink and Riviera red.

Schweitzer told the Observer that the price range of his restored stock spans from $195 to $595. Popular models include the sleek West-German Olympia ($295-$395) and the Swiss-made Hermes 3000 ($395), both valued for their responsiveness and durability. When author Larry McMurtry thanked his Hermes in an Oscar speech for Brokeback Mountain, Gramercy started a waiting list for the model.

With 20 percent of his business dedicated to overhauling and selling vintage and portable typewriters, Schweitzer should be a Mad Men fan, but “I looked at one of the girls typing in the first few episodes,” he said. “She was on an IBM Selectric with a correction key,” his Brooklyn accent thickening in disgust. “They didn’t have a correcting button in 1960!”

In the 1980s, every desk in every company still had a typewriter, he recalled. Local firms could own 500 to 700 machines that Schweitzer maintained. Relationships lasted years.

“Now nobody works in a job long,” he lamented. “There’s no loyalty. We put our stickers on the printers we fix. Two years from now, an office manager knows to call us when it breaks down.” Some clients ask if he can match specials for $98 a toner instead of the $100 he quoted. “For
$2, they’ll go somewhere else, even though we deliver it personally.”

Just then a customer entered with her father’s malfunctioning Smith Corona. He typed “Paul Schweitzer” using two strong fingers. Clack, clack, clack. Then he readjusted the ribbon and handed it back. When she reached for her purse, he smiled and waved her away. 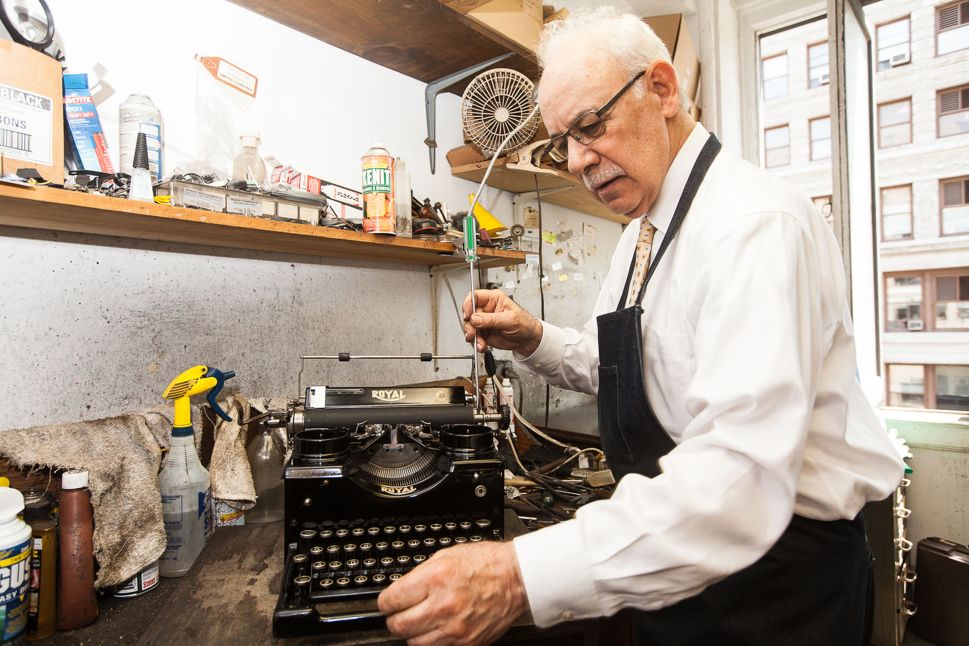