Previously on “A Millennial Reviews”…

There have been more deaths in Hollywood this year than in Westeros. Oh, btw, SPOILER ALERT: people die on Game of Thrones constantly. I bet if you live in Westeros you have to change the overlay on your Facebook profile picture CONSTANTLY. Not as much as in real life though. Real life is messed up. The news is just turning into that part at the end of The Oscars where they play Legend of Zelda music and rapid fire off head-shots of everyone who died filming the latest Kevin Hart buddy cop masterpiece. Not only are celebrities dying, now animals are dying and BECOMING celebrities. First they killed Harambe for trying to defend his safe space, then they killed those alligators for expressing their alligator cultural traditions. The whole thing made me so mad that I stopped Instagramming myself eating large piles of bacon for ten minutes to write an open letter to the Bronx Zoo expressing my deep understanding of and empathy for animals. You probably saw it in your social media feed, it went viral as hell and I made enough money off of it to take my band out to eat at this five star restaurant I’ve had my eye on for a while called Le Slaughteré. It was incredible, they made the chef Improvise Chopped style with nothing but a severed Komodo Dragon’s head, a quart of truffle oil, and a bucket of Panda lungs. Anyways I love animals and will never stop fighting for them.

On top of that, Brexit is happening and it’s causing John Oliver to do all these act outs where he pretends he’s an otter trying to take a selfie or whatever. I don’t even fully understand what Brexit is, but I’m certain I’m supposed to be comparing someone involved in it to Hitler. Either way, because of the whole John Oliver otter thing, it’s affecting all of us. I can’t deal with the news right now. The news is dark and full of terror. I can’t even with it. So what do millennials do when we find ourselves not being able to even? We escape into nostalgia. Now usually I get high by remembering the 90s, but I needed some extra high octane next level escapism for this month, so I cranked up the millennial nostalgia “way way back machine” higher than any 20 something has ever turnt it up. I think I watched Netflix TOO hard. How do I explain this? I remembered the 90s so hard that I overshot it and found myself in a wondrous and confusing dimension way past any Sega Genesis reference or Good Burger meme I could recognize. It was scary, but in this world I discovered that Beauty is Everywhere.

You know what I hate? Plots. Plots are the entire reason that bad things happen to non cis white straight non undead unwoke “people of zombie” on The Walking Dead. Stories are the reason Nicole Simpson died on that new steamy fictional drama that just came out. Conflict is the reason I have PTSD from reading Choose Your Own Adventure novels. Beauty is Everywhere throws all that crap out and instead delivers to us a relatively static image of a human ketamine trip who speaks in ASMR voice about trees while painting Windows 95 desktop backgrounds. The single cast member of the show is Bob Ross, a denim warlock with Rent Is Too Damn High hair who spends his entire existence standing in the same 3 square feet in front of an easel in what I can only assume is the very vacuum of space. You can put this show on for days at a time and he never really moves. It’s just Bob, forever. When you do this for a certain amount of hours you reach a tipping point where Harambes, Donald Trumps, overdraft fees, text messages, FOMO, and other worldly problems fade to midnight black.

When Bob Ross paints, you can feel your own blood flow. The meat suit you call a body becomes unimportant and there is only you and mother fucking happy little trees. He does this by droning on and on and painting quickly, which throws the viewer’s mind into a sort of parallax distortion. Painting is a glacially slow process, so Bob painting quickly happens at a pace that is lightning fast in terms relative to painting, but is still the slowest thing that’s ever happened on television. This is a television show about literally watching paint dry. You stare and you watch something that should take days take half an hour. It’s like watching a mushroom grow. Some people will tell you that a watched pot never boils. Bob Ross will show you come to a boil. Watching him paint is simultaneously unhinging and hypnotizing. It’s like surviving a decade of war and then staring into fire, or staring at that gif of Shaq smiling at that cat.

This is because nothing happens in Beauty is Everywhere. Every once in awhile Bob pulls a baby squirrel out of his pocket or feeds a deer a bottle of milk, and it is the single most disruptive thing to ever happen in this universe. That’s it. After that, Bob hurls his psychic harpoon back into your head and you sit and stare. He’ll start with a Van Dyke Brown and just sort of smudge it onto the canvas. You will foolishly think these smudges are laid out at random. “That’s so random,” you will murmur. You will listen as he describes the Dark Siennas, the Prussian Blues. Suddenly the image will appear, but did it really appear? It’s more like it was there all along, and this psychedelic being, Bob Ross, is just using paint to show you what you previously were unable to perceive. Your mortal eyes know nothing of Bob Ross’ vision. Only when this happens do you truly get into what this show means.

You start to ask yourself the real questions. Bob Ross’ hair makes him look like a happy little tree and yet he paints happy little trees. Is he painting himself? Is life a cycle? Is he making fun of us? Is it healthy to retreat into pop culture like this? Is it an alarming symptom of the arrested development of an entire generation that we choose as our main form of entertainment the rehashing and revisiting of content we consumed as children? Do we really need another ID4 movie? What do we make once we’ve remade everything? Will we just be left with a cultural black hole? Is it possible to re-remake a movie? Is Hillary Clinton a product of our desire to literally make it the 90s again? Is Donald Trump doing the exact same thing, but with an older generation that chooses to remember the 50s? Am I really a millennial? Am I actually a millennial in age but not in spirit? Is that the joke? Am I writing through a fake character to mock society, or to mock that which I see in society that reminds me of the shortcomings I feel unable to confront regarding my own identity? What happens after we die? 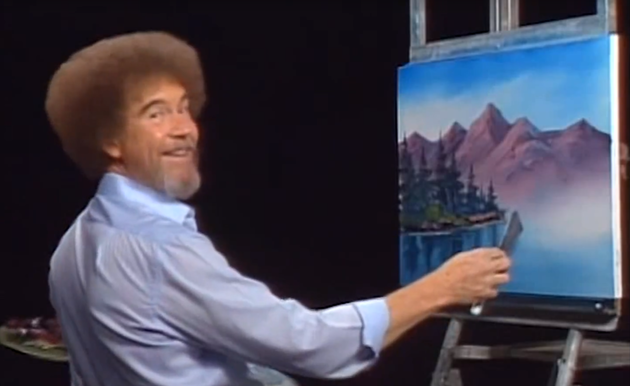