My neighbor K lost his job at age 62, and, with it, his family’s health insurance. Between his wife’s freelancing, his severance and savings, K’s family has kept up with the mortgage, and a scholarship helps their older daughter stay in college. But losing health insurance proved devastating. Like many older Americans, K faces significant medical expenses: he has diabetes, and his wife and one of their two children have other chronic conditions. These facts make it even harder for K to find a new job: companies hesitate to hire older workers whose health status may burden employer-provided health-insurance plans.

Our social insurance system offers surprisingly little to K and to millions like him (the U.S. Bureau of Labor Statistics reports 1.132 million people over 55 are currently unemployed). Under the Consolidated Omnibus Budget Reconciliation Act (COBRA) statute, he can buy his current health insurance coverage, but, without the contribution from his former employer, this is prohibitively expensive. Medicaid is available for the poor but his assets and his
spouse’s income make them ineligible. K can buy insurance through the state’s Affordable Care Act exchange, but this, too, is exorbitantly expensive, since the ACA allows insurers to charge premiums nearly three times as high for people of his age than for younger enrollees.

The irony is that there is a simple solution to K’s problem, one that would not only help my neighbor but would lower health care costs throughout our economy: Medicare. While currently available only as a public insurance program for those over 65 and the disabled, we could easily open Medicare up for general enrollment by allowing K and others older than 50 to buy into the program.

Medicare is already America’s most efficient and cost-effective health insurance.

President Obama campaigned in 2008 to allow the general public to buy insurance through Medicare and such a proposal passed the House and was supported by a majority of the Senate in 2009. The so-called “Public Option,” was dropped from the Affordable Care Act to win the vote of one crucial senator, Joseph Lieberman (nominally of Connecticut but also known as the “senator from Aetna”). But for Lieberman, K and his family, and millions like him, would now have affordable insurance.

While currently available only as a public insurance program for people over 65 and the disabled, we could easily open Medicare up for general enrollment. Medicare is already America’s most efficient and cost-effective health insurance. It has a lower administrative burden, it processes bills at a fraction of the cost of private insurance and it incurs many fewer other administrative expenses. And Medicare can reimburse providers at lower rates because it imposes fewer billing and insurance-related expenses on them; it is cheaper for providers to bill Medicare than private insurance because the program is a larger system with a single billing system and it imposes fewer cumbersome utilization reviews. Finally, Medicare also uses its bargaining power to drive down monopoly prices for hospital and other services. Shifting people from private insurance to Medicare lowers overall health care spending because it increases the efficiency of our entire economy; we are better off as a country when more people join Medicare.

Because Medicare is already much more efficient than private insurance, it could charge my neighbor a premium at which Medicare would neither make a profit nor lose money, that would allow K to buy into the program for less than any private insurer would charge. Not only would K benefit, but so would others on Medicare, and so would those on private insurance. Medicare will become even more efficient because increasing enrollment will lower average costs for those in the program already by giving the program even greater scale economies and bargaining power. For those buying private insurance, removing older subscribers from the insurance pool will actually lower average costs, allowing lower premiums for those who remain. And everyone benefits from a program that makes skilled older workers like my neighbor more employable. We would all gain if he could return to the workforce and contribute to our economy—and pay taxes.

Gerald Friedman is a professor of economics at the University of Massachusetts at Amherst. 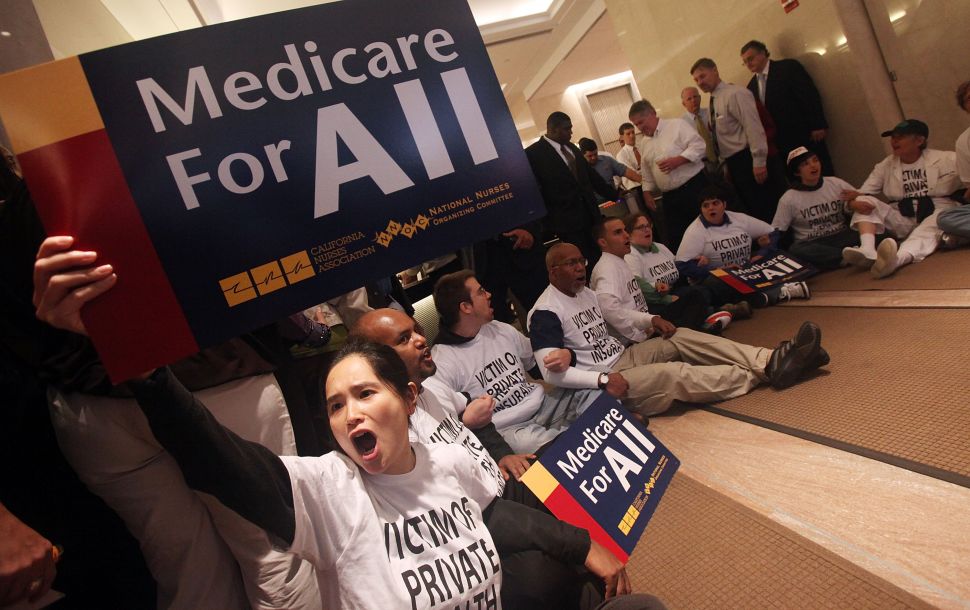