According to OpenSecrets.com, during the 2014 midterm election cycle, the National Rifle Association (NRA) spent $809,462 in campaign contributions to Congressional candidates.

It will probably come as no surprise to learn that the overwhelming bulk of that money went to Republican Congressional candidates. Only $40,800 of that total went to 11 Democratic candidates for the House of Representatives, the majority of those in rural and/or Republican-leaning districts. The remaining $768,662 went to 200 Republican candidates for the House and Senate. Data on the ongoing 2016 election cycle is not available yet on the Open Secrets website.

Those are just the direct donations to candidates, which say nothing about the constant pressure and cajoling the NRA brings to bear on members of Congress. According to Open Secrets, NRA lobbying costs for the two-year 2013-14 election cycle amounted to $6.77 million. Halfway through the current cycle, those lobbying costs were on pace to shatter the 2013-14 spending on lobbying expenses, and the current total reflected on Open Secrets for this cycle is $4,340,564—though it is important to note that only one quarter of 2016 numbers have been filed to this point.

That means that the NRA, to this point, has spent a minimum of $11,920,026 on campaign contributions and lobbying expenses on the federal level since Jan. 1, 2013, but this does not take into account any contributions it has made to candidates this cycle. Still, as these are the most current numbers we have, that’s what we’ll go with.

Of course, that’s just the NRA. It doesn’t take into account the plethora of gun rights advocates, such as Safari Club International, Gun Owners of America, and the National Association of Gun Rights. Again, according to Open Secrets, gun rights groups combined to spend more than $4.1 million in direct campaign contributions and more than $31.5 million on lobbying during the 2013-14 election cycle. The totals on contributions to individual candidates slightly exceed $975,000, thus far, for the 2016 cycle, with more than an additional $995,000 going to political action committees; lobbying expenses recorded thus far this cycle are $14.2 million.

The gun lobby’s spending of nearly $52 million has kept Congress from weighing in while 1,409 people perished in the free-fire zone that is today’s America.

Yes, even in Washington, that’s a lot of money. All told, the gun lobby has poured nearly $52 million into pressuring lawmakers over a 40-month period from Jan. 1, 2013 to March 31, 2016. For those of you scoring at home, that’s nearly $1.3 million a month being poured like onto Capitol Hill to keep members of Congress from taking any action that would restrict the sales or general availability of guns. It’s the same pressure that led to the expiration of the Federal Assault Weapons Ban at the end of 2004 and that keeps Congress from ever considering reinstating such a ban.

And oh, what bitter fruit this fertile flow of cash has helped produce.

The Washington Post, on October 12, 2015, reported that there had been 1,001 mass shootings in the United States since the start of 2013, claiming 1,266 lives and resulting in 3,619 injuries. GunViolenceArchive.org reports another 119 mass shootings claiming 143 lives and resulting in 467 injuries between Oct. 12, 2015, and March 30, 2016, the most recent filing quarter for campaign contributions

During the 40 months between the end of 2012 and the end of the first quarter of 2016, that comes to 1,120 mass shootings in the United States, claiming 1,409 lives and resulting in 4,086 injuries. The gun lobby’s spending of nearly $52 million has kept Congress from weighing in while 1,409 people have perished in the free-fire zone that is today’s America.

It has been said many times that you can’t put a price on a human life. But as far as the gun lobby’s federal spending is concerned, it looks like the price of a life can be estimated, on average, at somewhere around $36,905.61. That’s what gun advocacy groups spent for every individual killed in a mass shooting during the same time frame. The gun lobbyists and the Congressional campaign committees, if you’ll forgive the expression, are really making a killing. 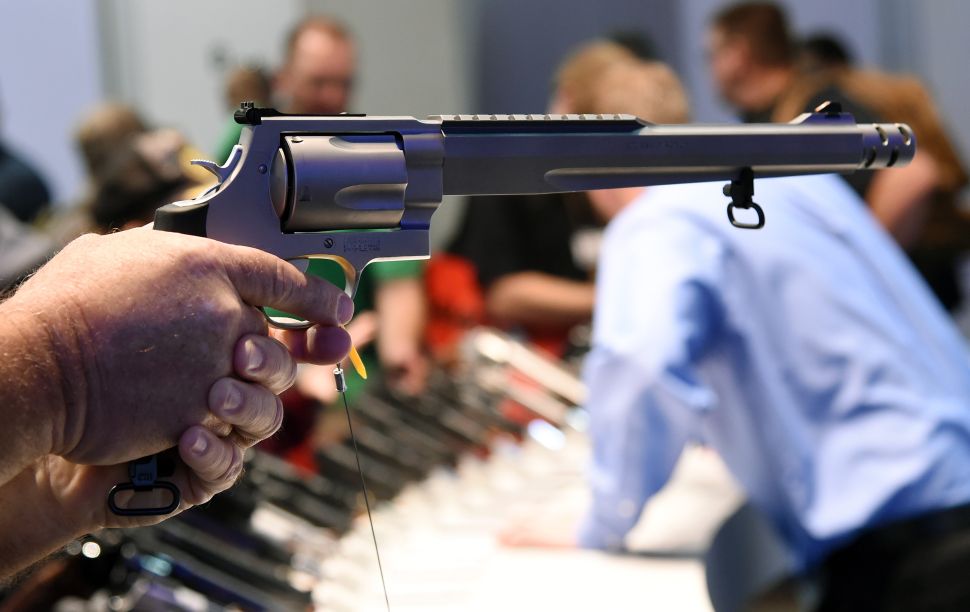