Speaking to radio host Brian Lehrer, de Blasio commended Connecticut Sen. Murphy, who stood at his desk until well past 2 am to force the Senate’s GOP leadership to agree to a vote on a pair of firearm bills. One of the measures would ban individuals appearing on the federal terror watchlist from buying guns, the other would instate mandatory background checks for online weapon sales and purchases at gun shows.

For de Blasio, however, this is just the first step.

“I give tremendous credit to Senator Murphy and his colleagues, who, I think, have a real breakthrough here,” the liberal Democratic mayor said. “The NRA built up that very tragic power over many years and decades, and it can be torn down and it has to be torn down.”

Murphy’s marathon act came in response to the slaughter of 49 people at a gay club in Orlando over the weekend by an American-born Islamic State sympathizer. Republicans like presumptive presidential nominee Donald Trump have argued that Muslim radicalism is to blame for the slaughter, while Democrats have hoped to parlay the tragedy into a push for new restrictions on guns like the AR-15 used in the massacre.

“Senator Murphy, to his credit, used an act of outrage to force the hand of the Senate,” de Blasio said. “I think the tables are slowly turning on the NRA, and the way to turn them more is to be very, very aggressive with these kind of legislative actions.”

The mayor also asserted that state and local officials could sever the gun lobby’s access to cash by divesting pension funds from firearms manufacturers—something de Blasio has sought to do in New York City.

“There are so many vehicles we have to put pressure on the gun industry. And the gun industry is what funds the NRA,” he said. “The real power of the NRA is its seamless connection to the gun industry, very cynical. And that is an area where there’s real vulnerability that we can attack.”

Some critics of the Senate proposals have argued that the terror watchlist contains numerous inaccuracies, due in part to extremists’ use of innocuous aliases. Others have warned that blocking a gun purchase might alert a would-be terrorist that the federal government was monitoring their activities.

The mayor, however, brushed off such concerns.

“The list can be modified appropriately,” de Blasio said. “We’re not going to lose lives while we’re dealing with those subtleties.”

The NRA did not immediately respond to requests for comment. 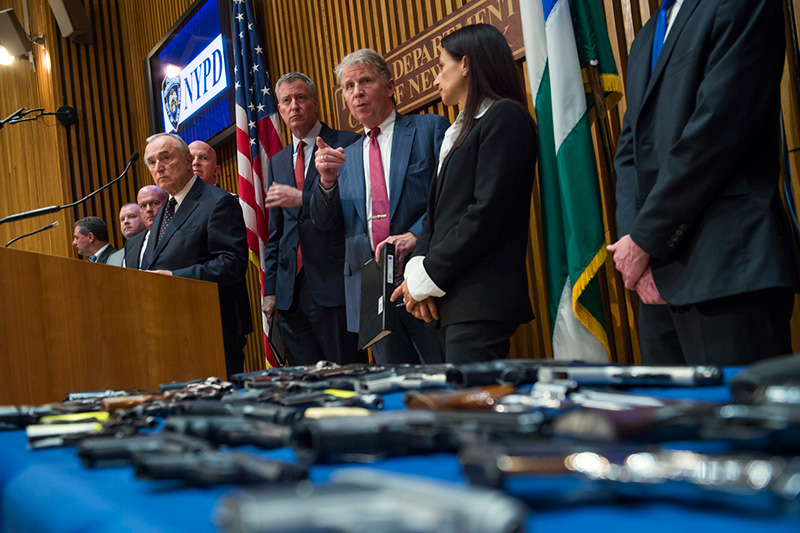