Places like Harvard used to teach us that independent thought trumped uncritical adherence to political orthodoxy. So it was disturbing to find, during a visit last week to London, all my friends insisting it’s idiotic even to contemplate “Brexit,” Great Britain’s exit from the EU. “Don’t believe the Brexit bullshit,” they said. “It’s bollocks.”

But all the cabbies favor Brexit, over the issue of immigration. And, contrary to accusations of bigotry hurled at Brexit supporters by the “Remain” camp, they only seek British control over the pace of immigration—not to squelch it entirely.  They also acknowledged the validity of arguments to stay in the EU.

Those friends are all captains of industry and finance whom I got to know in the 1990s, as an investment banker based in London and responsible for European M&A. Business was good, as the Single European Act of 1986 called for the creation of a single European market by 1992, along with further political integration of what was then the European Economic Community.

My firm was itself an expression of the balkanization of European economies that the EU would cure: I was Chief Executive for Europe of Lazard’s New York firm and Head of International for Lazard’s UK firm, and their ambassador to Lazard’s French firm, German firm and Italian firm. (All those Lazard firms eventually merged.)

Outrage at the temerity of Brexiters to challenge these “experts” is palpable.

But the experts have yet to address satisfactorily Queen Elizabeth II’s question about the 2008 financial crisis: “Why did no one see it coming?” And, if they failed to foresee a catastrophe that did occur, is it really so unreasonable to question their forecasts of a catastrophe that will occur from Brexit?

In fact, the economic analysis the Remainers cite is pretty questionable. The Financial Times, a passionate supporter of Remain, wrote on June 16 about “The dubious lure of taking on the elite.” After all the arguments have been tabled, the only evidence it offered that EU membership has “been an economic success story” for Britain is that, since Britain joined in 1973, “[n]ational output has risen faster than that of Germany, France and Italy.”

The author wouldn’t have survived a client presentation drafting session with that analysis. A first-year statistics student could point out that many other factors could be at play. For example, Britain was living a socialistic nightmare until Maggie Thatcher turned the country around beginning in 1979, with free-market policies and reductions in taxes and regulations. Could that have had something to do with Britain’s enhanced growth?

Moreover, unemployment in Britain is lower than in the EU as a whole—5.3 percent against 9.4 percent, in 2015. Youth unemployment, with all the insecurity it implies, was 14.6 percent against 20.4 percent. And countries on the Continent are notoriously unwilling to undertake the structural reforms in labor markets and regulation that are necessary for growth for which the European Central Bank is begging.

So could it be that, in fact, Britain is being held back by the EU, and its higher growth rate is actually a signal that it can do better freed of the hyper-regulated, over-taxed welfare statism of much of the Continent?

The sophisticated economic analyses of the governmental bodies essentially rest on assumptions about adverse effects on financial markets, due to “uncertainty” and on trade.

Let’s not revisit their track record as financial market forecasters. As for effects on trade, how on earth can you expect a functionary at the IMF or the OECD to forecast the effects in 2030 of trade negotiations the UK might conduct next year with a President Trump, who wasn’t even on the radar a year ago? The underlying assumption seems to be that a spurned EU will punish the UK out of revenge. There also seems to be some credence lent to the Obama Administration’s threat to place an independent Britain at the “back of the queue” in trade deal negotiations.

As of year-to-date April 2016, Britain actually has a trade deficit of $25 billion with the other EU countries that are its top trading partners, including $10 billion with Germany and almost $2 billion with France. The UK is a top-five export market for each of them. Will they really cut off their noses to spite their faces by creating obstacles to that trade?

The meddlesome Obama’s threat is equally absurd. Britain ranks fifth among countries importing from the U.S., right after NAFTA members Canada and Mexico and America’s manufacturers, China and Japan. It’s one of only three EU member states with which the U.S. is running a trade surplus. You’re going to punish them at America’s own expense, Mr. President, to please Europeans who are peeved by Brexit?

Arguments about security also hold little . Britain’s security against the Russian bear depends on NATO, America and itself, not the EU. As for terrorism, the UK can do just fine on its own, as it had to against the IRA, and especially so without the interference of European courts.

And finally, there’s that great catch-all bugaboo: “uncertainty.” Well, yes Brexit presents uncertainties. As though that isn’t the case with the EU’s crappy economy, self-inflicted refugee and immigration crises, mass murders in France and Belgium and a neighboring Russian mafia state emboldened by the EU’s craven response to its aggressions?

The Brits have been pretty good at navigating uncertain waters for all their long history. That may be a lot easier to do under their own steam, without having to defer to 27 other nations.

All the foregoing is merely to say that the case against Brexit is nowhere near as clear-cut as the Remainers claim. And unlike Barack Obama, I actually have a vote, and I haven’t decided.

Meanwhile, on Monday the bookies are citing rising odds in favor of Remain, now above 70 percent.

Say they’re right. Do the elites and experts smugly return to their certainties and business as usual, having put the irrational primitives in their place? At their peril. Even 30 percent is a big number of people who feel that their legitimate grievances are being ignored by their leaders. The same dissatisfaction with business as usual in the U.S. is feeding both Bernie Sanders on the left and Trump on the right (or wherever The Donald is). Election after election has highlighted deep divisions in political philosophy, of roughly even magnitudes.

The unwillingness—or inability—of elites to address anemic economies, Islamic radicalism and renewed aggression from dictatorships in Europe and Asia is fueling the fears that fuel dissident movements on both sides of the Atlantic.

Those fears will turn to anger if they continue to be brushed aside by self-satisfied Establishments who hold them in contempt. We may not yet be at the point of Yeats’ apocalyptic poem, where

The best lack all conviction, while the worst

Are full of passionate intensity.

But we may not be far off. 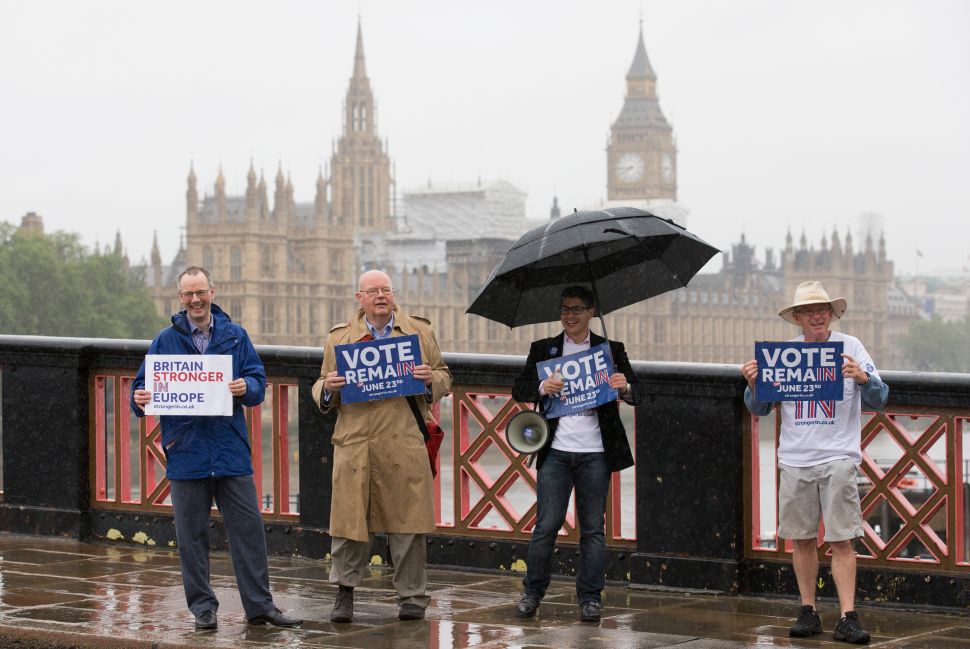