According to the anti-Semitism watchdog group AMCHA Initiative, 69 anti-Semitic incidents occurred on 20 different California campuses during the recent academic year. UC Berkley led the way with eight instances, followed by UC Irvine and UC Santa Cruz with seven each.

“When it comes to anti-Semitism, California schools continue to top the list, both in number and severity. To those of us closely monitoring the rise of campus anti-Semitism over the past few years, this comes as no surprise, since many California schools were ground zero for the campus anti-Zionism movement,” explained AMCHA Director Tammi Rossman-Benjamin. “Examination after examination demonstrate a direct connection between anti-Zionist activities on campus and acts of anti-Jewish hostility. The problem is not going away. In fact, it’s picking up steam and must be addressed immediately.”

AMCHA tracks all reported incidents of anti-Semitism on college campuses throughout the U.S. To be classified as anti-Semitic, an incident must meet the definition established by the U.S. State Department.

In 2015, 464 anti-Semitic incidents on campus were reported across the country. The first half of 2016 has seen 254 occurrences. At the current pace, 2016 will see an increase of nearly 10 percent in anti-Semitism on college campuses nationwide.

AMCHA’s findings are supported by a report released this week by the Anti-Defamation League showing that anti-Semitic incidents on American college campuses nearly doubled in 2015.

“We are disturbed that violent anti-Semitic incidents are rising,” said Jonathan A. Greenblatt, ADL CEO. “And we know that for every incident reported, there’s likely another that goes unreported. So even as the total incidents have remained statistically steady from year to year, the trend toward anti-Semitic violence is very concerning.”

Greenblatt was referring to 56 assaults, the most violent anti-Semitic category—representing a more than 50 percent rise from the 36 assaults reported in 2014.

One campus that is certain to crack the top five for 2016 is UC Irvine. With six incidents already reported this year, UCI has become a notorious hotspot for anti-Semitism.

“Based on my experience within the past two years, it’s only gotten worse. Even compared to the beginning of this year. I know faculty members who have been at UCI for a while, and they agree it has gotten worse,” Blum said.

Last month, five incidents of anti-Semitism were reported on the UCI campus.

Noah Lightman, a recent graduate of UC San Diego and an appointed member of Associated Students for the 2015/16 academic year, was repeatedly ignored by fellow student government leaders as he attempted to speak on behalf of the Jewish community at meetings.

During the first Passover Seder this past year, the Associated Students held an event titled, “Race, Privilege and Campus Climate.” Prior to the event, Lightman expressed his concern for the guaranteed lack of Jewish presence at an event that addresses them.

Lightman told the Haym Salomon Center, “I was told to ‘check my privilege.’”

The force driving the rise of anti-Semitism on college campuses in California and across the country is the anti-Israel Boycott, Divestment and Sanctions (BDS) movement. Founded in 2005, BDS claims to be about human rights for Palestinian people. Critics argue that the movement does nothing to improve the lives of Palestinians and is strictly focused on demonizing and delegitimizing the Jewish state.

“Over the 15 years that SWU has been working on campuses, we’ve witnessed the climate around Israel grow more toxic, propelled by the BDS movement.  When Israel is being constantly demonized by groups that practice BDS, it negatively impacts people’s view of the Jewish community and predictably culminates in a rise in anti-Semitic incidents.”

The University Of California Board Of Regents has recognized the anti-Semitism problem on their 10-campus system. In May the board released a “Statement of Principles Against Intolerance,” which condemns hate speech on campus toward Jews and any other historically targeted groups. Each school is left to its own devices to handle each incident, making it questionable that anything will change.

AMCHA’s Rossman-Benjamin “urges UC chancellors to use the summer break to implement the new UC policy and design initiatives that will educate the campus community about anti-Jewish intolerance which far too often has gone unidentified, unaddressed and left to fester.” 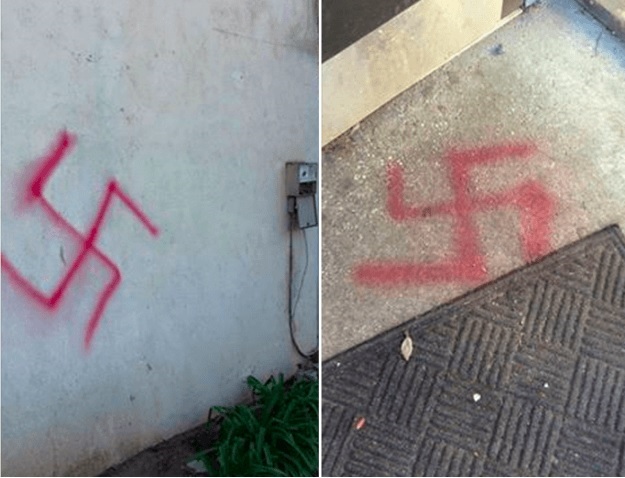