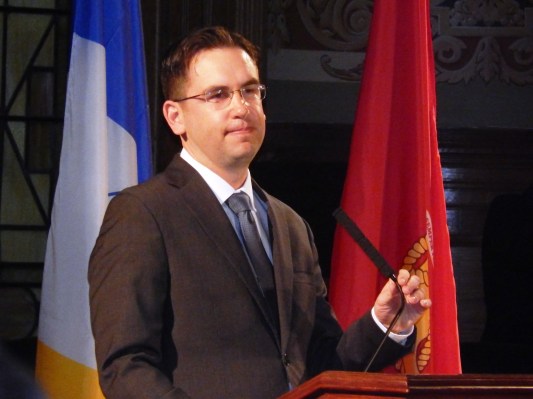 As the nominating contest approaches for New Jersey Democrats’ 2017 gubernatorial candidate, the most high-profile rivalry on the shortlist has been between Senate President Steve Sweeney (D-3) and Jersey City mayor Steve Fulop. With that contest widely expected to determine Governor Chris Christie’s successor in the solidly blue state, the primary battle between Sweeney and Fulop will likely come down to which man is better able to cut into the other’s regional territory.

Sweeney’s connections to insurance executive and former Camden County Democratic chairman George Norcross could give Fulop a small but significant opening. Newcomer Alex Law lost his congressional primary bid to U.S. Representative Donald Norcross, George’s brother, by a roughly 70-30 margin after a bitterly critical and massively underfunded ($1.3 million to just over $60,000) campaign against the first-term congressman. Though Law’s defeat was decisive, a candidate with Fulop’s resources could easily win over that same minority with similar criticisms of South Jersey machine politics.

Montclair State University political science professor Brigid Harrison said that while Fulop will never win over the powerful South Jersey Democratic machine and secure the line in the region’s most influential counties, taking aim at Sweeney’s connection to Norcross could help him garner support from voters in Gloucester, Camden, Atlantic and Cape May Counties.

“It’s going to be very difficult for Fulop to garner enough support early on to win any of the South Jersey party lines,” said Harrison. “Norcross’ influence is enormously strong down here. But having said that, there is enormous dissatisfaction with Steve Sweeney, particularly in parts of Atlantic County.”

“Though obviously, Alex Law didn’t do that well in his race, there still is good deal of anti-Norcross sentiment.” “That enormous link between Sweeney and Norcross and the resentment it has incurred on the part of many Democrats means that there is a real strong chance of Fulop making inroads in South Jersey.”

Fulop has made his own overtures to South Jersey voters, making an appearance in Atlantic City at the height of the debate over its ongoing effort to prevent a state takeover  in May. Sweeney was caught in a war of words with the mayor of the resort town at that time, insisting on a takeover of the city’s finances that he sponsored in the state Senate with Norcross and Christie’s support.

That Fulop took that moment to introduce himself to the region, Harrison said, could be just the first step in the Hudson Democrat’s attempt to play Sweeney’s close relationships with Norcross and Christie against him. After Fulop criticized Norcross’ participation in a meeting at the governor’s mansion, where Sweeney’s takeover bill was hashed out with Christie and several Atlantic City Democrats, Norcross said that he “never hid” his interest in “ensuring that South Jersey is strong and united.”

With Atlantic City fighting an uphill battle to balance its budget before an October deadline to prevent that takeover, Fulop could have more opportunities to attack Sweeney on his bill — especially if the city privatizes its authority by selling it to New Jersey American , for whom Norcross’ brother Phillip has lobbied in the past. Fulop abruptly terminated Jersey City’s bond council contract with the law firm Parker McCay, where Phillip Norcross is a partner, in 2014.

“These, in my view, really are the top two,” Harrison said of Sweeney and Fulop’s chances against other gubernatorial hopefuls like Assemblyman John Wisniewski (D-19), Senator Ray Lesniak (D-20) and former ambassador to Germany Phil Murphy, who has been the only candidate to officially announce his campaign.

“Many people down here, he got good press. He established some relationships, and I think it’s the beginning of some inroads,” she said.