With the threat of strike looming, a large coalition of New York Democrats issued a letter on Wednesday demanding a fair contract for Macy’s retail workers.

The letter, addressed to to Macy’s CEO Terry J. Lundgren and provided to the Observer, pressures the company to meet the Retail, Wholesale and Department Store Union workers’ demands before their current contract expires at midnight tonight.

“Macy’s workforce—at the 34th Street, Parkchester, Rego Park and White Plains stores—deserves fair treatment and compensation for its dedicated service to the Macy’s brand and its customers,” officials said in the letter.

In the letter, the coalition reminded Lundgren of the long history between Macy’s and Local 1-S/RWDSU, whom they call the “backbone of the The Magic of Macy’s.” The officials said that with the June 15 expiration date looming, they are now concerned that “the labor management cooperative history is being threatened.”

“We are all strong supporters of unions and the collective bargaining process,” the letter read. “We urge you to continue your history of providing industry-leading wages, hours, and working conditions for your workforce.”

The coalition then called for an affordable healthcare plan, wage increase and pension for senior employees among other demands in support of the union members’ position. The coalition, comprised of 18 elected officials was organized largely by Manhattan Borough president Gale Brewer.

The letter is just the latest political support given to Macy’s workers by public officials in recent weeks. At a rally demanding a fair contract at Macy’s flagship store in June, a number of public officials attended to support RWDSU members, including Public Advocate Letitia James. And Mayor Bill de Blasio and presumptive Democratic presidential nominee Hillary Clinton met with Local 1-S/RWDSU members to express their support for a fair contract for Macy’s employees.

“As always, we encourage good faith negotiations between the two parties,” de Blasio said in a statement. “Macy’s and RWDSU are both important to the fabric of our city, which we know is stronger when workers thrive and good jobs are protected. We hope to see a fair deal by Thursday’s deadline.”

Macy’s workers have grown increasingly frustrated over the “clear increase in income inequality” and “corporate greed” at Macy’s over the last few years, according to the RWDSU website. The workers authorized their union to call a strike if Macy’s does not meet their demands by June 15. The store has not seen a strike since 1972.

“In this final negotiation today for a fair contract at Macy’s, we have support from countless leaders and allies in New York and across the country,” Stuart Appelbaum, president of the RWDSU said in a statement. “As we get closer to midnight, Macy’s needs to put into place a new contract that addresses the needs of workers who are central to the company’s profitability. If Macy’s does not negotiate in good faith today, we will have no choice but to strike at midnight,”

Macy’s officials seem to be taking the strike threats seriously—it has already placed ads in local newspapers seeking temporary workers. Macy’s spokeswoman Eliza Kazan told the Daily News that negotiations are ongoing, but are “working toward reaching an agreement before the June 15 deadline.”

Officials said they would be happy to explore how to make Macy’s partnership with its workers “even stronger” in order to expand “The Magic of Macy’s” to more tourists.

Read the full list of elected officials who signed on to the letter below: 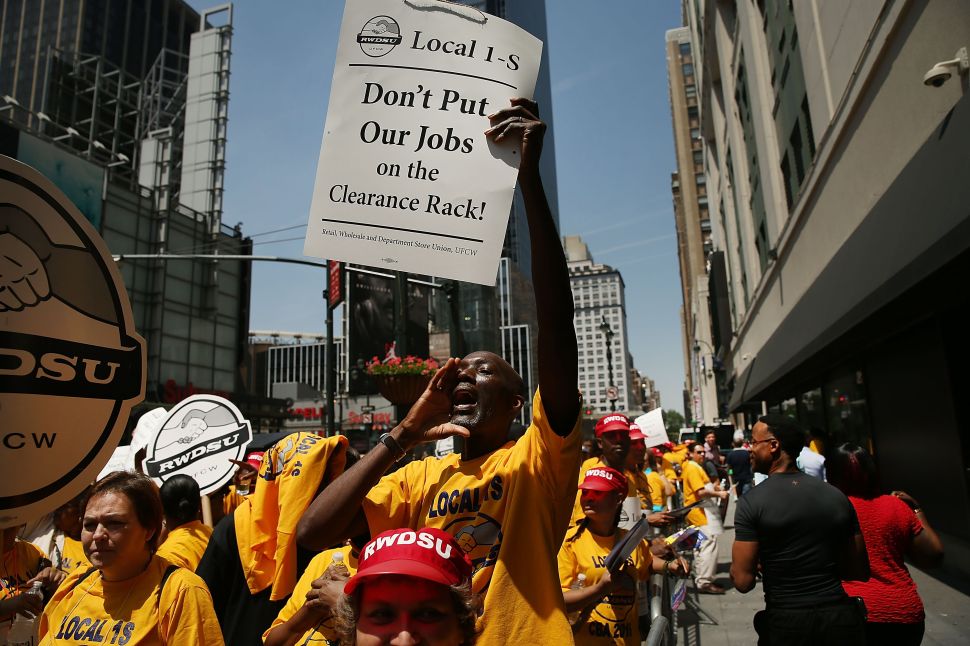