More than one hundred union members employed by Macy’s rallied outside the Herald Square store on Thursday afternoon to demand a fair contract, just one week before their contract is set to expire.

Members of Local 1-S of the Retail, Wholesale and Department Store Union swarmed 34th street to protest new work rules imposed by Macy’s. An outpour of public support came from local officials and labor organizations who chanted in unison with union members.

“Let everyone traveling here to New York City who are experiencing Macy’s know that the Macy’s experience is due in large part to the union and the employees,” New York City public advocate Letitia James told the crowd. “And all we are asking for is a little respect.”

Donning yellow shirts and clutching signs that read “Macy’s: don’t DISCOUNT your workers” and “Macy’s: The Grinch that wants our holidays,” employees chanted about health care benefits, pay and work schedules at the store’s entrance. Alarms set off by Macy’s employees inside the store could be heard over the cheers outside as the tension heightened.

The rally comes one week after Local 1-S members voted to authorize a strike should a fair contract not be negotiated by June 15. The company is reportedly seeking to cut retirement benefits and exclude certain jobs from coverage under the new contract.

“The healthcare, pension and general wages don’t meet the standards for today’s workers,” Teddy Been, a Macy’s sales associate who attended the rally, told the Observer. “They want to give us less while they get more and that’s wrong. We are 4,700 members doing whatever we need to do to make this happen.”

Earnestine Gay, a counter manager at Macy’s and Local 1-S member for more than 27 years, said that worker coverage has noticeably depleted throughout her time at the company.

“When I started at Macy’s, they had great benefits. They used to offer a 401K plan and we always had a good pension,” Gay said. “Everyone who wanted to do retail wanted to work at Macy’s. Now, people don’t even want to stay because of the harassment.”

We will be at the bargaining table working toward reaching an agreement before the June 15 deadline,” Macy’s spokeswoman Elina Kazan told Daily News. “Calls to strike by the union are an expected and standard part of the negotiation process.”

To New Yorkers, the scene is a familiar one. In 2011, more than two hundred Macy’s employees gathered outside of Herald Square to rally for worker’s rights and better wages. Before that, workers hadn’t gone on strike since 1972.

Gay, who has attended past strikes against Macy’s, said she owes her job security to unions. Local activists and officials attending the rally echoed Gay’s pro-union stance, calling members across the country to join Macy’s employees in their strike. Public advocate James even called the union members the “face of Macy’s” and New York City, a “union town.”

After Communications Workers of America won its battle against corporate giant Verizon, labor unions may be giving companies like Macy’s a run for its money.

“We saw CWA go up against a corporate giant like Verizon and win. We saw it happen after being on strike for 40 days,” Vinny Alvarez, president of the NYC Central Labor Council. “And we know very clearly that it’s a time for solidarity, it’s a time for us to stay together.” 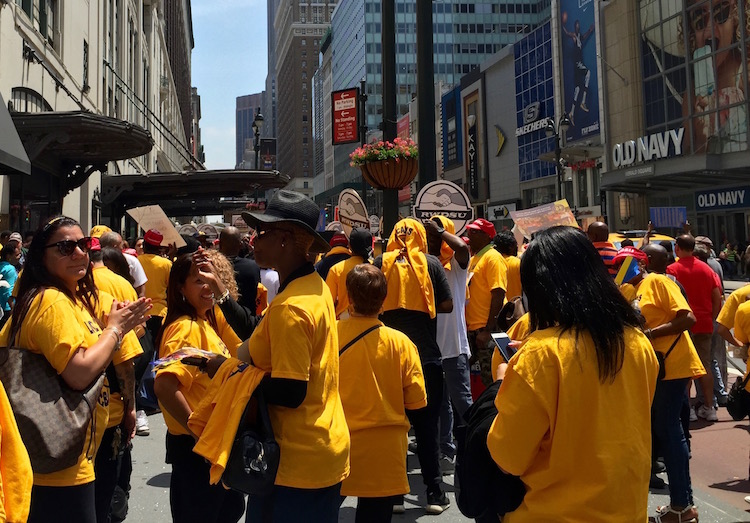