Oh…Hey there. Hi. Hey. Did I already say that? AHHHH. ABC

Wells Adams is going to be very busy for the next few days. “Don’t get dumped on television, people want to talk about it afterwards,” he laughed. I got to chat with the Nashville-based radio host/my celebrity crush Wells this morning, fresh off his first—and last—one-on-one date with JoJo. Here’s what he had to say about trying to fall in love surrounded by the type of guy he probably hated in college.

OBSERVER: So why’d you decide to go on the show in the first place? [In my head: …instead of just meeting some adorable hipster girl at Bonnaroo, your natural habitat]

WELLS: First and foremost I was looking for an adventure. There have been less than a thousand people that have been asked to do the show, so I thought it would be a fun experience. To be honest with you, all the conventional forms of dating haven’t really worked for me, so I realized it was ridiculous to think you would fall in love on a television show, but the traditional forms of dating weren’t working, so I figured why not give this a shot.

Not as unlikely as anywhere else, statistically I guess.

What were your impressions of the other guys?

Everyone was really cool, but I’m also very much a people person, and I talk to a brick wall for a living every single day [as a radio host] so I can talk to anybody and have a good conversation. I liked everyone. I genuinely liked everyone. And I was genuinely friends with everyone on the show.

I was even friends with Chad. I mean, I know that sounds crazy, but he had a different story that wasn’t really showcased a whole lot. He was going through some tough times. His mother passed away recently, and I’m not sure if he was emotionally ready for something like this. And he was a bit socially inept, and this was a tough situation for him to be in, because it was a room full of alpha males, you know? So it wasn’t the perfect situation for him.

Do you consider yourself an alpha male?

I’m not, but I’m definitely a big personality. My job is to be a personality on the air, so I can definitely entertain a room, if that makes sense. 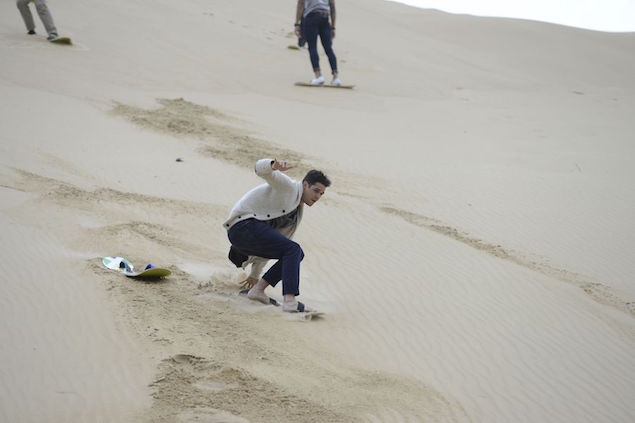 He was the only cool person on this show. ABC

What was your first impression of JoJo?

JoJo is gorgeous. The girl can wear a dress. She’s very nice. As I got to know her, I’d say what stood out to me the most about her is that she’s very compassionate. You could tell it was very hard for her to do the show. I mean, you have to be a little bit cold and callous to break up with someone every couple of days. And I think that was hard for her to do, and it showed. And I think it shows on the show as well, but I remember feeling really bad for her because she’s just put in a tough situation.

So why’d you wait so long to kiss her?

So I was the king of the group date. I went on every single group date, except for one and the reason I didn’t go on that one was because I went on the one the day before. So my time with her alone was very limited. My experience with JoJo was always around a bunch of people. And I made the best of that situation; I always made sure I stuck out, but it was hard to pull her aside and get her alone.

The currency on that show is the time you get with JoJo, right? You’re trying to build up as much time equity as possible. I didn’t get a whole lot of that and when I did get it, my plan was, I want to get to know you as best I can. Because at the end of the day, it is a two-way street, and I needed to know if she was right for me, if that makes sense.

I know this sounds terrible, but I thought my time was better spent getting to know her than making out with her. In hindsight I probably shouldn’t have done that; getting to know someone in a romantic setting is learning if you are compatible, romantically, and in hindsight I wish I had been more forward, but to me, I just wanted to get to know her. And inversely, I wanted her to know who I was.

I don't always dune board in Uruguay, but when I do I wear a cardigan… #teamwells #bachelorette #bachelornation @bacheloretteabc thanks @pacozero for the vid!

That’s a very real world dating approach. [In my head: …Have you ever seen The Bachelorette?]

I always said, we were in the same situation, her sample size was just bigger than mine.

Are you watching the show now? What’s it like?

It’s fun to watch the show. What people don’t realize is that I lived the show, but I’m watching it for the first time as well. There’s so much of it that I didn’t know happened because I’m not on one-on-one or two-on-one dates. People can kind of explain what they talked about and what went down, but for the most part, I’m watching with eyes unclouded as well. It’s just this weird thing where I’m watching this show where I’m starring in, but like I didn’t see the script.

How do you feel about how Chad was portrayed?

I realize Chad made wonderful TV but what aggravated me about that story was that his wacky behavior took away screen time from some people who were really wonderful human beings with great stories and interesting personalities, and that bummed me out, because I feel like America got deprived of some really, really wonderful people, in lieu of someone who was not wonderful.

Has being on The Bachelorette affected your love life?

Well I haven’t really been dating since the show’s been airing.

This is Lunchbox. He and his siblings would like to watch Netflix with you forever. Hit up my buds at @nashvillehumaneassociation now!

Well, you need to pretend that you might be engaged.

Exactly. A big thing is you don’t want to have any spoilers, right? And if I started dating someone in the middle of the show, then that’s a spoiler that I don’t get the girl in the end. It’s not that I didn’t date purely for the show. A lot of it was because when I came back from the show, I wanted to decompress a little bit. It’s a pretty intense situation.

How about dating now? [In my head: …like with a cute writer who lives in New York City and sometimes writes about television]

I don’t know, I guess we’ll see how things will proceed for my fifteen minutes of fame. [NOTE: I suggest a flight to NYC.]