With the end of the Democratic primaries and several weeks to go until the Democratic National Convention in July, pressure from mainstream media for Bernie Sanders to drop out of the race is increasing.

“Hillary Clinton Made History, but Bernie Sanders Stubbornly Ignored It,” read a headline in The New York Times after Clinton was projected to win California—despite the LA Times reporting more than 2.5 million ballots (nearly half of the state’s six million votes) had yet to be counted. Yamiche Alcindor, the same Times reporter who claimed Sanders ignored history, also inferred Sanders’ decision to stay in the race was sexist, writing on June 12 “Bernie Sanders Refuses to Concede Nomination to Hillary Clinton.”

Calls for Sanders to drop out have been steady since March, when Clinton gained a significant lead with Super Tuesday wins, and several prominent Democrats subtly signaled Sanders should end his campaign to help block presumptive Republican presidential nominee Donald Trump. Such calls are symptomatic of the Democratic Establishment’s coronation of Hillary Clinton as their nominee—and their disdain for Bernie Sanders, who dared to challenge them. This also illuminates why Bernie Sanders should never endorse Hillary Clinton for president.

In April 2015, when Bernie Sanders began his campaign as a fringe candidate, he was not taken as a serious challenger to Hillary Clinton. Even The Daily Show’s Jon Stewart jokingly predicted Clinton would crush the Vermont Senator, but Sanders proved those dismissals wrong with a message that resonated with millions of Americans who are tired of corrupt and rigged political systems. Yet, despite the overwhelming support for his grassroots campaign, the odds were stacked against Bernie Sanders—by both the Democratic Establishment and mainstream media.

As Glenn Greenwald predicted a few days before the California primary in an article for The Intercept, the media has patted itself on the back for helping Hillary Clinton, the first female presidential candidate of a major party, get elected. “But that’s all the more reason to lament this dreary conclusion,” he wrote. “The one positive aspect, though significant, is symbolic, while the actual substance—rallying behind a Wall Street-funded, status quo-perpetuating, multimillionaire militarist—is grim in the extreme.”

Because of the type of candidate Hillary Clinton is—one who represents the interests of her vast corporate and wealthy donor network—Bernie Sanders should stay in the race until the convention, withholding his endorsement while holding Clinton accountable for working and middle class Americans. Throughout his entire political career as the longest-serving Independent in the history of Congress, Bernie Sanders’ loyalty has remained with the everyday people he fights to protect.

In 1988, Rev. Jesse Jackson ran a historic presidential campaign in the Democratic primaries, winning 13 states to challenge the Establishment candidate, Massachusetts Governor Michael Dukakis. Upon losing the primaries, Jackson continued his campaign into the Democratic National Convention, where he endorsed Dukakis for the sake of unity, virtually silencing himself and his supporters. Dukakis went on to select Senator Lloyd Bentsen as his running mate, a moderate Democrat, and lost the general election to George H.W. Bush. The Democratic Party continued to shift to more moderate and centrist positions with the nomination of Arkansas Governor Bill Clinton in 1992, relegating progressivism to the party’s fringes.

Many progressives fear Hillary Clinton will also shift back toward moderate political stances to broaden her appeal in the general election, repeating history and leaving behind progressive Sanders supporters and the issues his campaign brought forth into the national consciousness.

A recent Reuters/Ipsos poll found over three-quarters of Democrats want Bernie Sanders to have a major role in shaping the Democratic Party platform, and more than half want Clinton to select him as her vice presidential running mate. Although the latter is highly unlikely, Bernie Sanders’ influence in the Democratic Party is dependent upon his independence from the Democratic Establishment. Endorsing Clinton would be conceding defeat not just of his campaign, but to the corruption and influence of corporate and wealthy interests in American politics. 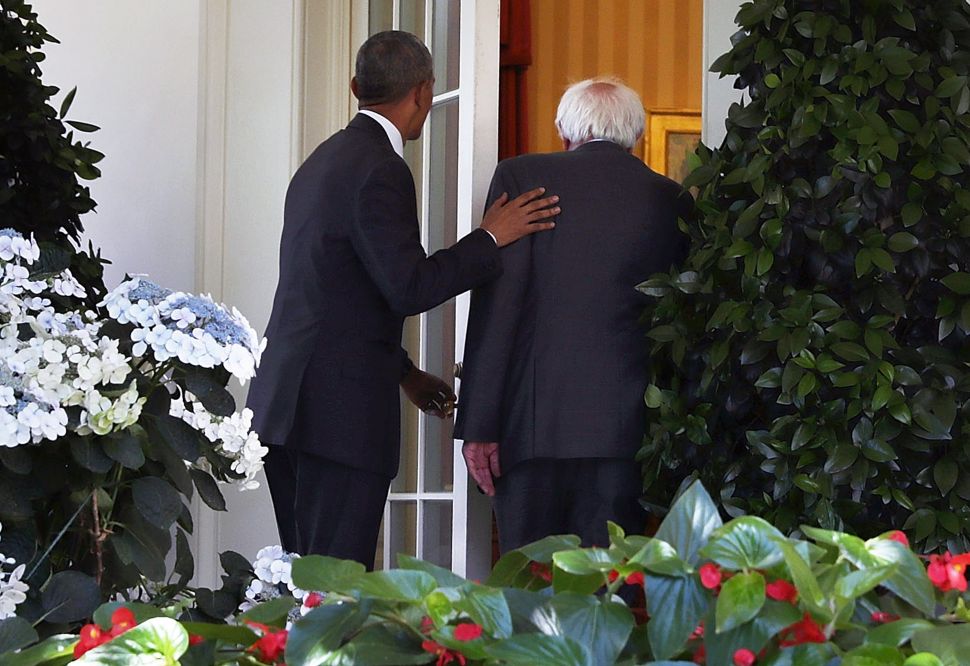