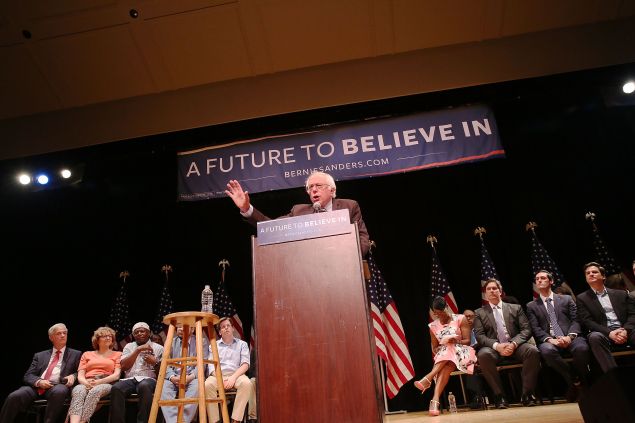 Vermont Sen. Bernie Sanders may have lost the Democratic nomination for the White House, but he’s determined to tear up the party’s leadership by the grassroots—with New York’s at the top of the list.

Returning to the city of his birth, the self-described democratic socialist and career independent didn’t acknowledge his losing battle with Hillary Clinton, but he vowed his war against his adopted party’s hierarchy would go on. With an array of candidates for local office arranged around him, he recalled his 22 victories across the country and his crushing April loss in the Empire State.

“In every state, and particularly here in New York State, we had to take on virtually the entire Democratic establishment,” he said. “I have no doubt that a strong, well-organized grassroots movement can take on the establishment, and they can defeat the establishment.”

The candidate said his aims were twofold: to recast the party platform in the image of his campaign, and to recruit candidates to carry on “his political revolution.” One of the first steps in his plan for “revitalizing American democracy”?—abolishing closed primaries like New York’s, where only registered members of political parties can participate.

“Right here in New York State, three million New Yorkers were denied the right to vote in the Democratic primary,” the candidate, who lost the state by fewer than 300,000 votes, lamented. “It doesn’t take a politically sophisticated person to figure out that that whole ethic, on the part of the Democratic and the Republican leadership in this state, is about making it harder for people to get involved in the political process.”

The Democratic National Committee has granted Sanders unusually large influence on its platform writing and rules committees for a losing candidate. He said his nominees to the latter would attempt to force superdelegates—party insiders, often elected officials, who back the presidential candidate of their choosing—in future cycles to support the candidate who wins their district or state.

“We’re going to change that. In fact, while we’re at it, we may as well transform the entire Democratic Party,” he said, to riotous applause from the audience.

To the latter end, Sanders reiterated his calls for his supporters to run for office.

“Real change never takes place from the top on down. Always from the bottom on up,” he said, noting he would join congressional candidate Eric Kingson for a rally in Syracuse tomorrow. “It’s not about me. It’s about people at the grassroots level. It is about people running for school board, for city council, for mayor, for state legislature. Or Congress. Or the Senate. But it is millions of people getting involved in the political process in a way that we have never seen before.”

He even assured them they were better qualified than they knew.

“Don’t be afraid of what you don’t know. On your worst day, you’ll likely know a lot more than some of these other guys who have been there for a long time,” he continued.

The gathering came just days after a Bloomberg poll showed that close to half of the Brooklyn-born leftist’s supporters would not back Clinton in a general election—and that nearly a quarter of them indicated they would throw their votes to Trump. Several supporters and campaign volunteers came to tonight’s event armed with “Never Hillary” and “Hill No” buttons and signs.

It also came two days after Sanders supporters unsuccessfully sought to prevent Gov. Andrew Cuomo—an avid Clinton supporter and superdelegate—from becoming the head of the state’s delegation to the Democratic National Convention in Philadelphia next month. The Sanders delegates, who wanted to nominate Palestinian-American activist Linda Sarsour, are suing the party and claiming the dominant Clinton faction ignored their requests from the floor at the New York convention on Tuesday. 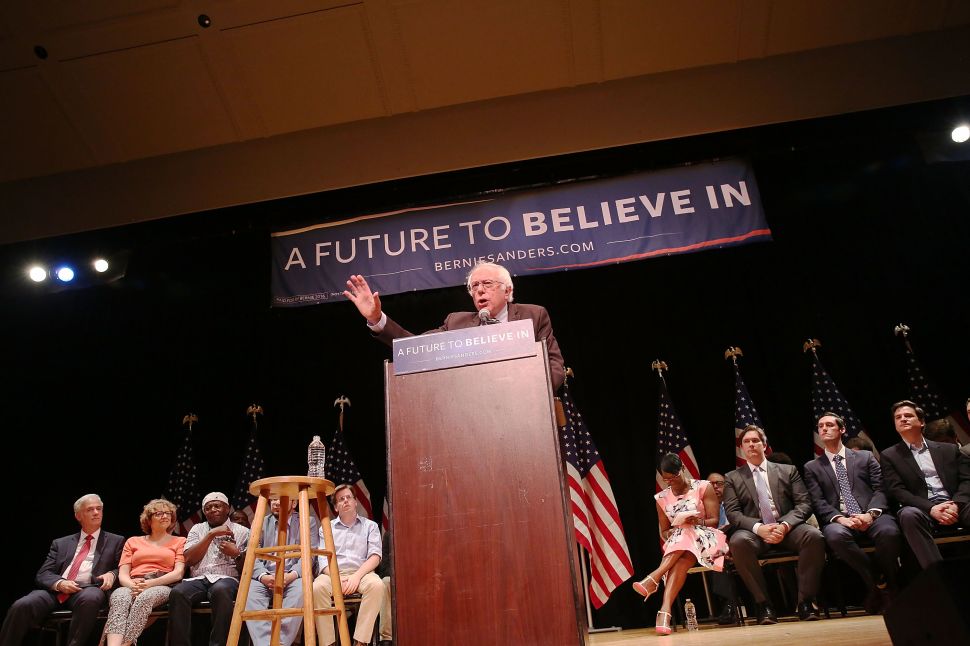