Welcome to our TV Fashion column, where TV Ate My Wardrobe‘s Emma Fraser discusses the trends in television apparel. This week: On Game of Thrones, revenge is a dish best served bold.

Get yourself a look that can do all three; battle, funeral, coronation. So is the Cersei Lannister way in the excellent Game of Thrones season 6 finale that saw the end of one reign and the beginning of another. Cersei has had her grip on the Iron Throne via three different men – one husband and two sons – and she has outlived them all. One died by her hand (or her scheme at least), one poisoned by another and the final took his own life after Cersei struck at the heart of his new beliefs and took away his love.

The opening sequence of “The Winds of Winter” was like a step by step guide of how to revenge while looking fucking fabulous. Cersei got ready for the war she has been waging since her original High Sparrow related plan took a diversion into the land of backfiring. One very dramatic haircut of Felicity-proportions and a shame walk later; Cersei has been building toward this moment all year. Take away trial by combat and the next step is burning it all to the ground and thanks to a very large supply of wildfire that task was an easy one to tick off Cersei’s ‘To Do’ list.

While the Tyrells adorn their war wardrobe with plumage and floral accents and the Starks are all leather and fur; the Lannisters like to do things with decadent flourishes. Switching out gold for silver and red for black because you don’t want to be too garish in this moment of vengeance, but you also want to say “Hey, I got this.” The children might be paying for the sins of their terrible fathers as Tyrion, Yara and Daenerys ruminated on in “The Battle of the Bastards” but as with Jon Snow, Cersei is taking direction from her father in the style stakes in her choice of black leather.

The episode opens with Cersei in the latter stages of getting ready while surveying her target and then cuts to the several players who are about to become victims of flames and falls dressing in their court best. Tommen still wears the symbols of his family whereas Loras blends into the wall as if he is already nothing. The Great Sept fills with those expecting spectacle who don’t realize this will soon become their tomb.

Margaery wise to schemes figures things out before it is too late and yet she succumbs to Cersei’s firestorm because she is stopped from exiting the Sept. The Tyrells are blown to smithereens and Olyenna switches out her blue for the black of mourning and takes up a Dornish alliance. The rose on Margaery’s chest is not enough to save her and she couldn’t out scheme the ultimate queen in this arena of endless back-up plans. There is not spare heir in the vicinity (oh hey Gendry wherefore art thou?) and the Iron Throne is Cersei’s, but the winds and flames of war are coming her way and she maybe should have saved some of that wildfire for this fleet sailing to King’s Landing. The promise of fire and blood approaches.

“I’m ready,” or so Tommen thinks after taking his sweet time to get to the trial (who wants to see their mother disgraced once again?).  Instead the Mountain blocks his path and he must instead watch as the Great Sept is reduced to rubble and smoke. Cersei meanwhile takes her sparkly adorned shoulders to her former “shame” tormentor. The way her outfit catches the light of the flames amid the darkness of the cell during the wine waterboarding is a strong reminder of desire and material things. Septa Unella stripped her of these things along with her dignity last year and now Cersei comes dressed in her finest power wardrobe to deliver an extended act of retribution.

When Tommen takes a walk out of a very high window Cersei’s fear about the witch’s prophecy comes true; all of her children are dead and this only leaves one move for Cersei. To take the throne she has all but been controlling since she became Robert Baratheon’s wife. She was a spare in this relationship as Robert’s one true love was Lyanna Stark (confirmed Jon Snow mother and Ned is Jon’s uncle) and she spun this less than favorable situation into dominating gold. It has taken many years and many deaths to get to this point and now her black battle wear turns to mourning mother garb after Tommen’s suicide. Who knew black could be such a versatile style choice in King’s Landing and it is no surprise to see Cersei sticking to this fairy tale Evil Queen appearance for her coronation. When you find a look that works it is best to lean in. Of course Cersei has worn black before, but unlike those other occasions of grieving she does not change out of her retribution ensemble for something more delicate.

Cersei isn’t the only women embracing this darker wardrobe as the sisters Stark are both clad in dark tones. Arya also has vengeance on her mind, and while Winterfell could be her next stop there is also the small matter of her list of names on which Cersei features rather prominently. Sansa’s not going full Goth Sansa, but she is now in a strong position of power and one where she can tell Littlefinger where he can shove his offer of love and ruling the Seven Kingdoms. The look Sansa gives Littlefinger as he watches the North chant “King of the North” suggests her concern over what Littlefinger will do to the man who now stands in his way.

“Hear me roar,” say Cersei’s lion adorned shoulders mirroring the armor Jaime wears and the silver matches the Iron Throne; Cersei and this seat of power has become one causing Jaime to give Cersei a Very Concerned look. Her wardrobe change points to her now black heart as the children that were keeping Cersei tethered to her humanity are gone.

It helps to have more than one killer black frock even if the differences are subtle and Cersei also switches out her sparkly decadent shoulders for more formal lions. It doesn’t do well to completely repeat a look and you’ve got to pick the right silver to go with the Iron Throne and that new crown. Cersei knows how important appearances are and she picks her most commanding garb for this very significant moment. No one should be thinking about the shame walk.

The last time ships came to King’s Landing with invasion on their mind Cersei dressed the part in a gold breast plate. Maybe it is time to dig out that old piece or commission a new one in silver to keep with her updated signature style because while winter is finally here, dragons are coming. 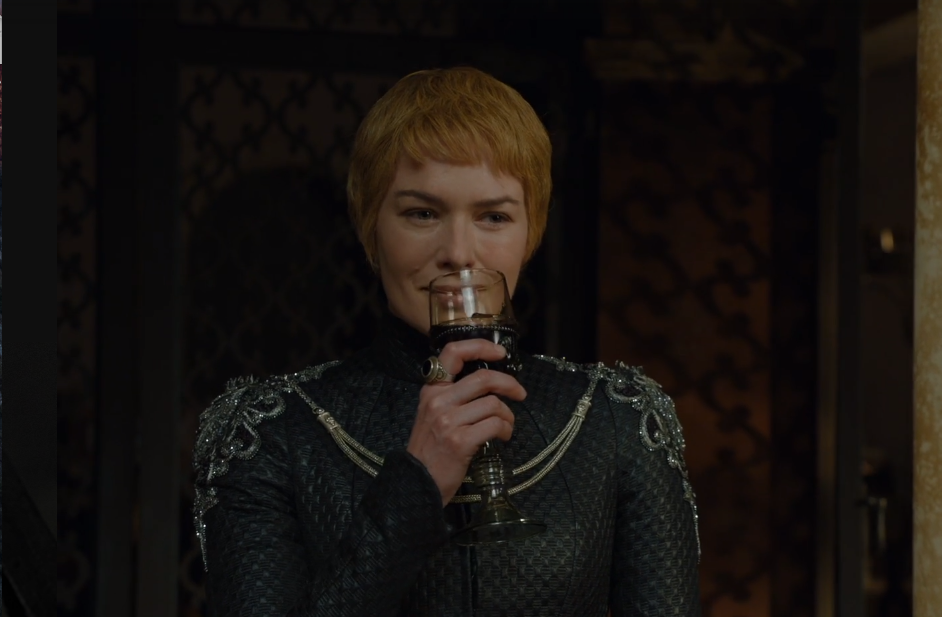